The Basics of Connecting to & Building a Relationship with Nature

Favorite Quote:
Only in the presence of nature may one find Heaven on Earth.

In a book way ahead of its time, Aldo Leopold wrote a group of essays framed around ecological understanding and relationship. A Sand County Almanac, written in 1949, first gets the reader to love nature and see beauty in even the smallest creatures and plants. Gradually, Leopold brings more of the harms from human hands into the picture to make it known that the natural environments he described in the beginning will soon disappear. The book is not one that every person would read for pleasure, but its basic ideas are key in order to have progress of nature conservancy in a world with progress of technology and should be taught to everyone to minimize environmental mistakes and ignorance of nature.
In Part I of the book, Leopold celebrates the abandoned sand farm by intimately describing the abundance of nature that the rest of society would only see as unimportant or not of any use. Leopold is the middle-man between the ignorant reader and the knowledgeable wilderness, and tries to open eyes by discussing the history and stories of both animals and plants. He instantly pulls the reader into an oak's history in the essay "Good Oak," describing snippets from the past as he rewinds year by year, sawing into the tree ring by ring. "We sensed," Leopold wrote, "We sensed that these two piles of sawdust were something more than wood: that they were the integrated transect of a century; that our saw was biting its way, stroke by stroke, decade, by decade, into the chronology of a lifetime, written in concentric annual rings of good oak" (9). He went deeper in "Come High Water" when describing the "autobiography of an old board" as a type of "literature not yet taught on campuses," and all riverbanks as "[libraries] where he who hammers or saws may read at will." High water, from floods, brings with it "an accession of new books" or pieces of lumber, each with its own story to tell to anyone who actually tries to listen (25). All of this is the first key part in moving forward with nature: understanding. By acknowledging that nature has its own stories to tell and by listening to them, people can begin to have respect for it in a number of ways.
Leopold deliberately immersed himself in the wilderness not only to understand the nature available to him, but to personally connect with it as well. By using personification at various points in his essays, along with letting himself become a student to his dog, a relationship with nature is beginning to show. One of the best examples of personification in his writing is in "The Green Pasture," where the river is a painter of one-time portraits. "Do not return for a second view of the green pasture, for there is none," Leopold tells the reader. "But in your mind you may hang up your picture, and hope that in some other summer the mood to paint may come upon the river" (52). The painting of the green pasture created by the river was a personal image held in his mind, one he described as "so evanescent that it is seldom viewed at all." He has "quietly and humbly" allowed himself to be placed within one of nature's secret spots, giving it the attention it surely deserves. The river being in a "painting mood," in return shows him "the garden of [the deer's] delight." In a serious but slightly comical way, Leopold tells the reader how his dog is a professor on partridges and how he himself has become his pet's pupil.

He persists in tutoring me, with the calm patience of a professor of logic, in the art of drawing deductions from an educated nose. I delight in seeing him deduce a conclusion, in the form of a point, from data that are obvious to him, but speculative to my unaided eye. Perhaps he hopes his dull pupil will one day learn to smell. (63, 64)

Unlike many people in society, he is able to accept the fact that, as a human, there are things to be learned from animals, even his own pet. This is a second idea, the notion that not only do humans need to understand nature, but that a relationship with nature can broaden eyes, ears, and minds as well.
Throughout the rest of the book, Leopold tends to grow more analytical about the ever expanding, fast-paced society. He views mankind as ignorant and because of its lack of knowledge, it has brought destruction when trying to create more connections between man and nature by going about it in the wrong way. “Man always kills the thing he loves, and so we the pioneers have killed our wilderness” (148). For one to see humans as murderers of nature, one must believe that nature, both animal and plant species, is just as valuable, if not more so, as humankind. “The ultimate value in these marshes is wildness, and the crane is wildness incarnate. But all conservation of wildness is self-defeating, for to cherish we must see and fondle, and when enough have seen and fondled, there is no wilderness left to cherish” (101). Humans have the misconception that nature is simply there for them to “see” and “fondle” with, but the truth is that it is something to be respected and cared for in a natural way.

The life of every river sings its own song, but in most the song is long since marred by the discords of misuse. Overgrazing first mars the plants and then the soil. Rifle, trap, and poison next deplete the larger birds and mammals; then comes a park or forest with roads and tourists. Parks are made to bring the music to many, but by the time many are attuned to hear it there is little left but noise. (149, 150)

This brings the question: Do people need roads or roadmaps to lead them to nature? Or is it the opposite, that the blank places on maps, the spaces in between the roads and cities, are where the true beauties of nature’s secrets lie? As dirt roads become concrete avenues and highways, as humans try to flatten nature in some areas and control it in others, the environment many once knew will either cease to exist or transform into something falsely beautiful.
Once one understands nature and has the ability to personally connect with it is when one can not only respect it, but feel sadness and hurt when it’s being mistreated. Leopold himself had all of these traits, which were intricately expressed in his narrative-like essays. Many people mistakenly believe that progress lies in the future of technology, and if that’s the case, progress will have a limit. The truth is, progress lies in the future of nature. If it goes extinct, humankind will not only lose a large part of itself, but also the history of the natural world as well as the lessons and stories nature still has to tell. 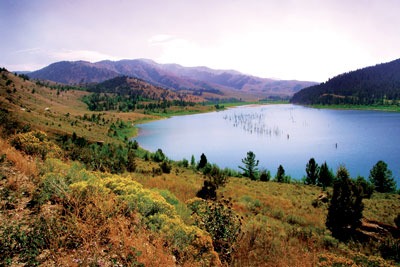