I believe in the equality of man, and I believethat religious duties consist in doing justice, loving mercy, and endeavoring tomake our fellow creatures happy. - Thomas Paine

I am the most interesting person in my class. My father and I once cycled throughthe battlefield of Little Bighorn in Montana, pretending we were Custer's SeventhCalvary and our bikes were horses. Last year, I attempted to drink an entiregallon of milk in one lunch period. I am the only person in my school, and maybethe world, who has been pulled over by the Highway Patrol for driving too slowly.Although I can't run three miles in less than half an hour, my entire fallschedule revolves around cross-country. While the other girls' motto is "RunHard. Run Long. Finish Fast. Finish Strong," mine is "Dead Last butDead Sexy."

I fell madly in love for the first time this summer,only to learn that my Romeo is gay. I drive a brown 1984 Chevrolet Capricestation wagon, complete with Gore-Lieberman bumper sticker and Cleveland Indiansdecal. Affectionately known as the "shaggin' wagon," I have doneeverything from 360-ing it onto the sidewalk to backing into a telephone pole.Nothing, however, has shaped my life more than growing up in a communitydominated by the Christian right. And nothing illustrates this better than theday I went through the hell door.

It was Halloween, and I wanted to bescared. My friend Carrie suggested we attend Hellstop, which I thought was ahaunted house. So we paid the five bucks and waited in line for over an hour. Atlast, the grim reaper led our group into a tent. A man dressed like Jesus stoodbehind a translucent wall. A girl knelt in front of him begging formercy.

"Please, Jesus," she cried. "Forgive me. Pleasedon't leave me."

Jesus turned away from her, and suddenly strobelights flashed and a man dressed in KISS make-up ran in and carried her away asshe screamed. This reminded me either of a really bad disco or a cut scene fromthe "Rocky Horror Picture Show." Somehow I had envisioned Jesus to be,I don't know, compassionate.

"This could be you!" yelled thereaper as we left the tent. Wait a second, that voice sounded familiar.

"What's it to you?"he shouted back. I couldn't believe it - my eighth-grade science teacher, whodidn't believe in evolution and warned us that the end of the world would comefrom China, was the reaper. This was unreal.

After being forced into alarge cage and screamed at by the devil, we finally reached the last tent. There,we listened to a real Southern Baptist minister preach about meeting God. Inorder to leave the tent, we each had to go behind a curtain and choose an exit.

There were three doors: one marked heaven, one marked hell, and one witha giant question mark. If you had been saved, you went through the heaven door,and if you hadn't been saved, you went through the question-mark door (wherepeople were waiting to save you). The only other choice was the hell door. Trulyhoping to be scared, I chose the hell door. Nothing reached out and grabbed me.No chain saws or vampires. Nothing but the parking lot. What a rip-off. I hadjust wasted five bucks.

"Katie, did you go through the helldoor?" Carrie and her friend Josh gawked in horror as they saw me comingfrom the direction of the damned.

"Yeah," I replied."Carrie, you said this was a haunted house. I wasn't scared atall."

These two fundamentalists then gave me a five-minute speechabout the Bible. I simply told them that although I had a deep respect for theirbeliefs, I didn't translate the Bible literally. Having been raised Catholic, itwas an explanation I was used to giving.

"I just don't want you to goto hell," Josh said. He really did care, and I respected him forthat.

"Don't worry," I assured him. "God likes me toomuch." They raised their eyebrows, but as I inhaled the cool autumn air, Ithought of my family, my friends, my running, my school, all the beautiful placesI had been - and I knew I was right. God liked me a lot.

As trivial as itmay sound, going through the hell door was a tremendously significant experience.My disappointment at nothing being there, and Carrie's horrified reaction to mygoing through it, illustrated just how different our religious beliefs are. I wasforced to make a choice: join the born-agains and appease many of my friends;make fun of them and judge them for their seemingly zany beliefs; or, finally, Icould accept and respect - even love - them for who they are and hope they woulddo the same for me. I chose the latter. Religious tolerance starts with theindividual, and it can't really be practiced unless differences exist and one isconfronted by them.

Although I became infamous for going through the helldoor, I think many of the die-hard Christian kids are amused by me. I was alwaysthe funny, outgoing, outspoken eccentric whose religious views weren't based on abook - and they liked and respected me for that. Even though I never fit in withthe evangelical crowd, it's part of who I am. It's made my beliefs stronger, andit's taught me to appreciate people for who they are and not what their religionis. Hellstop reinforced how different we are. It's up to us to celebrate, ratherthan fight over, those differences.

"Do you want to go out for icecream?" I asked Carrie as we got in my car. "My treat," Ioffered.

I donot understand why people wage war over religion. There is always common groundover Rocky Road. 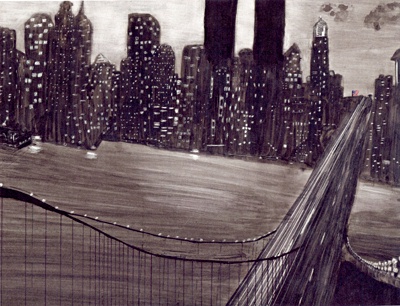 View profile
I actually have some other game related stories if you search my name on Teenink. I also have two blogs on Tumblr. One is All Around Gaming. The other is Debates of Entertainment. Only check these out if you're interested.