For as long as I can remember, I knew about the Boogeymen. My first memory even had to do with those black-suited men that haunted the night.


“The Boogeymen will get you, sweetheart,” my always patient mother explained, “and you don’t want that, do you?”


“No.” I remember answering proudly. I knew that the Boogeymen left good little girls alone and if going to bed when I didn’t want to made me a good little girl, I would do it.


As I grew older, I learned even more about the Boogeymen and how to avoid them. If an adult told me what to do, I would do it, lest I attract the attention of the Boogeymen. I ate all my vegetables, did my homework as soon as I got home, and watched only a half hour of television a night. And I never, ever, snuck out of the house after Curfew. My sister, Alix, was a different story.


“Jass, do you want to come outside and play tag with me?”


It was a warm summer night and Alix and I were watching a television show called the Good Family about a family named the Peters who did everything right and were rewarded by the Government with all sorts of fun prizes. I was ten and Alix, nine.


“Alix, it’s after Curfew. You know the Boogeymen will get us if we go even a step outside.”


“Well I’m not scared of the Boogeymen!” Alix’s hands were on her slender hips. Despite the fact she was a year younger, Alix was louder, more outgoing, and I had to admit, braver, than me.


“You should be!” I answered back. After all, I was the older one. According to my Rules teacher, it was up to me to teach my sister everything she knew.


“You know what?” Alix smiled wickedly and shook her long, chestnut brown hair, “you’re boring!” And she turned on her heel and walked away.


On television, the Peter family had just arrived at a beautiful, tropical beach. How I wished our family was just like the Peters. If not for Alix, we could have been. My mother, father, and I were well behaved Law-Abiding Citizens. Alix, however, got notes home from school about how she never paid attention and even talked back to a teacher! Why the Boogeymen hadn’t gotten her yet, I had no idea. She wasn’t even scared of them!


When I was sixteen and Alix fifteen, she began to be around our house less and less. Our parents worried and paced around the house when she didn’t show up for dinner. I tried not to worry, either, but I was always sure the Boogeymen had gotten her. Our teachers at school had told us to be on the watch for suspicious people. What if Alix was involved with them? What if the Boogeymen thought our entire family was just like her? I felt terrified but I couldn’t be my parents. They were already scared enough. And then the night came.


It was very late, hours past Curfew. I was asleep in my warm and comfortable bed when a loud, pounding, noise woke me up. In the bed next to me, Alix stirred.


“You are so stupid! How do you not know what a knock on the door in the middle of the night means? Did you pay attention at all in Rules?”


“As a matter of fact, I never did. Rules was only good for sleeping and cutting so I could smoke with friends.” Alix smiled that wicked smile of hers, “what rule did you just try to explain to me, Princess Follower?”


“It’s the Boogeymen!” I nearly shouted, “Someone in this house has broken a Rule and the Boogeymen have come for them. As a matter of fact,” I paused so the words I would say next would sink in, “mother, father, and I are Law-Abiding Citizens so I guess it must be you.”


“I’m not scared of the Boogeymen!” Alex said like she was nine years old again. However, she didn’t look too good. Her small, heart shaped face had gone white and she was no longer smiling.


A light came on in the hallway. My parents’ whispers and footsteps followed.


“Unless Jassina...” I couldn’t hear the rest of father’s sentence because they had gone downstairs. The next thing I heard was the front door opening and a loud, gruff, voice.


“Is this the residence of Mr. and Mrs. Lusha Tiana and Donovon Ren Parker?”


“Donovon Ren, Lusha Tiana, and Jassina Darling, are all Law-Abiding Citizens,” the man continued, “but Alix Fair has been plotting to bring the Government down. Had you any knowledge of that?”


“No, sir, not at all.” It was mother who answered this time.


“Of course you didn’t,” I imagined the man smiling. Alix’s face was as white as the sheets on her bed and her hands were clenched tightly together. “Deceitful little monster that she is. You will be paid a generous sum for your pains. Now where is Alix Fair?”


“She is in the room she shares with her sister, Jassina.” Father told the man, “that is where you will find her. Do not wake Jassina.”


“I’ll do what I want,” the single Boogeyman who had been sent to our home began to head up the stairs. Alix was now crying silently. I felt very conflicted. Yes, she had broken the Law and deserved to pay for it but she was still my sister. This had been coming for years and I knew it but why was I so scared? The Boogeyman wasn’t here for me, I had nothing to be afraid of, nothing!


“This room.” Father’s voice was right outside our door. Alix wasn’t crying anymore. Instead she had a rather odd look on her face.


“Gonna say good bye to me?” She asked with a hint of her old smile, “Or do you not even want to talk to someone who broke the Rules.”


“Good bye, Alix,” I said a little too stiffly.


“Come to my execution, alright? I don’t want to die without family.”


“Alright, Alix, I’ll come.” Now I was the one sobbing. Uncontrollable tears streamed down my face as I realized what my sister had just asked me and what I had just agreed to. I was sobbing so hard, I didn’t notice my own sister being pulled out of her own bedroom. Out into the night. 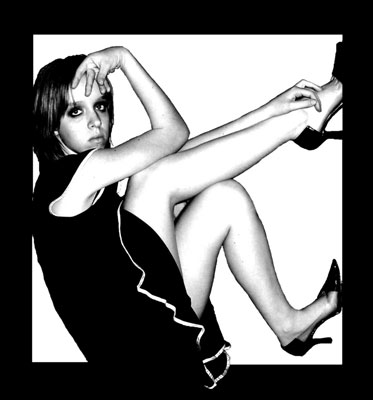 The author's comments:
This is a story about Totalitarianism and its affects on people. I chose to tell this story throught the eyes of a follower because it was simply a more powerful view for this story.
Post a comment
Submit your own