A long time ago, when humans still were not overpopulated, the whales were ruling over the sea. Multiple groups of whales were together all over the sea. At times whales would break apart from their group to breed. There was once a whale that separated from their group to find their mate. So she swam through the glistening sea, on her way to find a mate. She there finds an astonishing blue whale, who she believes is the one. However truthfully she knows she should not be with him because she is a fin whale. That does not stop her though because she ends up approaching the beautiful blue whale. They talk for awhile. Anyone who saw them from far away would know that it was love at first sight and with their love came a very small hybrid.

Growing up he would be surrounded by love and away from other sea creatures. He had to be away from other sea creatures because he was hybrid and they did not like it. As he grew older he realized that he was not in contact with other whales other than his parent so, when he grew older he decided he wanted to look for some. When it was time he told his parents he wanted to go on adventure however he did not tell them why. His parents had no choice but to let him go. When he was on his way they were left in worry.

On his first day he does not see anything but the blue sea and the old grainy sand.The whale begins to feel very lonely and realizes that he should have not left thome which would then lead him to crying. In the end he falls asleep ignoring all the thoughts that were going on in his head. The next days he is swimming at full speed when a baby squid bumps into him. The whale stops and and waits until the squid reacts. The squid wakes up and begins to start talking very fast and if one were to hear you would realize that he was about to cry. When the whale asks him what is wrong the squid states, “I am stuck and can not get off you. I’m so sorry.” The whale was very confused because he was not taught what to do in this situation. The whale then tells him, “It’s okay. I don’t really mind you. However, I will have to keep moving because I’m trying to find more whales like me”. The squid had no choice but to agree after all it was his fault he got stuck on the whale. It had been a couple of weeks since the squid had gotten stuck on the whale, during this time they talked to each other and got to know each other. If anyone were to see them they would assume they were the best of friends.

A week later the whale decided to rest on the sand and rest because he had been swimming all day. However, when he woke up he heard a muffled scream but he did not know where it was coming from so he waited to see if he would hear it again and he did. This time he was startled which caused him to get up rapidly and he looked around and could not see what was screaming. So he asked the squid if he knew where it came from but the squid did not know either. Suddenly they heard something groaning and for a moment the sea stood still and they finally saw what the whale had been hearing this whole time, it was a starfish. The starfish was a beautiful red-orange and if anyone were to see it they would be in astonishment. The starfish would tell them that the whale had laid on top of it and that he had hurt him severely. So the whale offered to keep him on his back until he was able to move again, the starfish agreed so the squid helped put him on.

They spent weeks together and of course during this time they got to know each other. They all laughed and enjoyed their time together, truthfully in the inside they wished it would never end. However, one day the hybrid whale had finally found whale, blue whales, they looked very appealing they glowed under the blue sea. The whale was very unsure on what to do, he had friends who he had gotten to know over time and now right in front of him where the whales he had been looking for this whole time. So, he turned back and pretended he had not seen them. The squid and starfish were confused but were relieved because they would be able to stay with their friend. The whale had realized he had everything he ever wanted, friends. 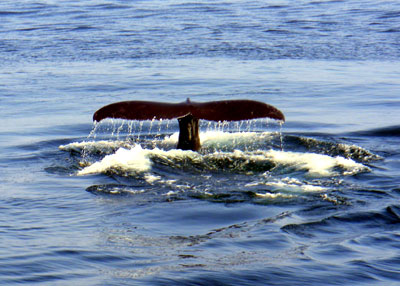