How had it happened? I ask myself that every day since it happened. I mean, how even could it happen? It didn't seem possible. But it was.

I lived on a normal street, in a normal town. Sure, it could get quiet sometimes, but that's how I liked it. You could say I was lonely, but I liked to think of it as independence. I spent most of my time hunched by the desk in my room, creating crazy inventions that nearly always blew up in my face. Literally.

Of course, my parents had tried to get me to make friends, but they were always disappointed when I came back home and retreated to the depths of my room. School was the problem. I flatly refused to go and they would have to drag me out the house most days. Eventually they gave up, weary of my complaints. They gave me work to do, but I found it pretty easy, and was finished so quickly I had time to work on more (unsuccessful) inventions.

The thing was, I didn't like other people. I felt awkward when I was around others. Besides, everyone already knew me as the weird kid down the street. The reason I refused to go to school was simple. They bullied me for being quiet and witty.

What was the point of friends anyway? That had been what I told to myself as I grew more seperate from the rest of the world.

But that reasoning had been what had caused it to happen.

I was sketching a few design ideas when I heard a little sigh in my room. Naturally I nearly jumped out of my skin at the sound, and I looked around in alarm. Was there someone in there with me? I thought I had been alone.

But I had been wrong.

A miniature dragon coiled itself comfortably on my desk, its tiny scales glistening in the light coming from my half-drawn curtains. Its wings were tucked into its body, and small puffs of smoke were streaming from its nose.

Curiosity overwhelmed me and I peered closer. Was this real?

The dragon opened an amber eye in mild irritation, and gave a feeble squeaking sound, not far from something a baby bird would make. It waved its tail slightly, before clambering to its feet and letting its gaze roam my room in wonder. Evidently, it had no more clue why it was here than I did.

It then looked me up and down, clearly summing me up, before deciding I must be friendly and clumsily flying over to perch on my shoulder. I felt its tiny, needle-sharp claws dig into me, yet somehow I felt completely in my comfort zone. Was it a baby? That would explain a lot.

I gently reached out and picked it up. It felt tiny in my hands. It was very warm, and seemed to be vibrating non-stop.

"Hey, where do you come from?" I was surprised at how silent my voice was as I stared in wonder at the creature in my palms. It squawked and flapped its mini wings enthusiastically. I wondered if it understood me.

I considered it for a moment, before placing it on my desk again. It gazed up at me in awe. I must be huge in its eyes.

I rushed to my cupboard and searched around. I found what I had been looking for, and brought it out to show the bemused dragon. It was an old jumper that didn't fit me anymore. It was super fluffy and had been my favourite as a child. Now it woud be good to accomodate a lost dragon for a while.

I grabbed a carboard box and carefully lay the jumper out in it. "What do you think?" I asked, placing the box infront of the dragon. In answer, he swooped into the box and cuddled up into the depths of the jumper. A few seconds later, I heard a few contented dragon snores.

Over time, me and the dragon grew very close. I called him Tiny, for no other name seemed very appropriate, and he began to recognise the name. I kept Tiny a secret in my room, and I would sneak food up to him often. He was very greedy and would snaffle up anything I gave him (even if it wasn't food and I accidentally left it out on the desk). I even made a bigger home for him, more complex than the previous one, and when I presented it to him he disappeared for quite a while exploring it happily.

With Tiny around, I grew more confident and eventually requested to go to school, much to the amazement and delight of my parents. I would carry him around in my pocket, and when I felt stressed I would just remind myself he was there. I even made friends, who were so weird themselves that they didn't care that I was strange.

But Tiny grew quickly and he was soon twice his previous size. It was hard to keep making excuses to my parents about the loud noise upstairs, or the huge mess, or even - once - the scorch marks up the wall. And they grew concerned about how much food I was taking up to my room, believing that I ate far too much for someone my age.

Soon Tiny was too large to fit in my pocket, and I had to keep him in my schoolbag instead, with the zip half open. It was hard to explain to my science teacher when she saw a puff of smoke escaping the bag, believing that I had stolen from her lab.

But after a few more weeks he wouldn't even fit in my bag comfortably, and he had to stay at home. During the schooldays, I missed him, and worried that he may escape or be discovered.

A few months after I first met him, I came home to find my parents in a towering rage. Wondering what was wrong, I jumped the stairs to my room, to find it a smoldering wreck. They thought that one of my inventions had exploded again, this time far worst the rest. This was unfair, seeing as I had stopped making inventions lately, and I later found Tiny hiding guiltily behind a chair.

Despite all this, I still loved my Tiny, who was actually huge by now. (He was bigger than me.) I would take the time to play with him as soon as I got home from school, and he would sleep at the bottom of my bed, now being too big for cardboard boxes.

One night, I came home to find Tiny by the window, looking miserable. He turned round at the sound of the door. I knew Tiny so well by now, and I knew what was wrong straight away, from the look in his fiery amber eyes.

I felt numb, and my vision blurred as tears filled my eyes. I fell onto him, and hugged him and buried my head into his scales. He rested his head on me and closed his eyes sadly. We both knew it had to happen, but I wasn't ready. "Please don't go." I cried. "Please, I need you."

He nuzzled me gently, before opening his eyes and slowly stepping back. I felt weak-kneed as I watched him at the window, silently asking to be let out. "I'll miss you, Tiny." I sniffed, and he growled as if to say he'd miss me too. Then I opened the window and watched my best friend fly away. Gone. 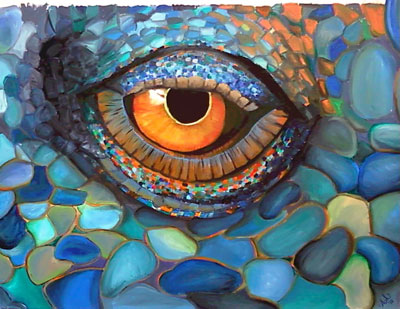 In pretty much all stories I have read with a dragon in, they are a horrible beast. But what if they weren't?

I wrote this based on the idea that dragons can actually be friends, and maybe actually help when you need it most.

View profile
I love the idea of a baby dragon! How cute!!