Over the distant brown hills appear the colorsof sunrise, bathing the land in rich morning light. The barn standstall, its weathered exterior gray in the dawn. The many corrals overflowwith awakening sheep, eager for their feeding.

An old man bearingtwo five-gallon buckets full of barley nears the barn. His ragged jeansare covered in the blood and muck of lambing season. He wears his redflannel shirt with the sleeves unbuttoned and rolled past his elbows,exposing his thin but powerful arms. On his head is a patched hat, thefloppy brim drooping down around his sunburnt ears. A border collieslinks beside him in true sheep-dog fashion, sulking andsnaking.

Inside the dim barn, the old man gives each ewe hergrain. Within moments, the barn echoes with the clatter of eating sheep.They bleat demandingly until he reaches them. Along with the grain hefeeds them sweet-smelling alfalfa, the rich green flecked with darkpurple flowers.

As he feeds them, the old man checks on theanimals in each jug. One ewe busily eats her flake of hay, a lambsuckling happily on each side, their tails wag in a frenzy as theydrink. Smiling, he resumes his chores, watching carefully for the barnswallows that viciously bombard him from the rafters. At another jug hestops, quietly watching the three inside. Gasping for breath, thenewborn lays on his side in the deep straw, his smut-faced sisterlooking up sleepily from where she's curled. Licking her new babyvigorously, the ewe utters chuckling noises as she moves along his slickbody. The speckled baby begins to stir, raising his head to look at hissurroundings. He bleats pathetically, bringing his mother quickly to hishead. Struggling, determined to stand, his lanky legs wobbleprecariously. Then, with a shake of his head, he falls with a baby'sgrunt. The old man laughs quietly. He's witnessed the same scenethousands of times, but it never fails to touch him. There is a warmth,an innocence in these simple actions missing in the rest of the world.

He finishes feeding and sits on a straw bale before continuingthe morning chores. The dog whines and sits beside him, soft, brown eyesupturned adoringly. She rests her head on his knee, pushing her cold,wet nose into his hand. He gently scratches behind her feathered ear."Yer a good girl, ain't ya. In jist a bit, we'll go on," hemurmurs.

Head bent, with arms on his knees, he rests. He's doneanything and everything to stay alive: farm work, ranch work and somework few would ever think of doing.

He has working hands, raw andchapped from the strong sting of birthing fluid, hard and callused fromhis life's work. His right hand is missing the pinkie and half the ringfinger, the result of an accident with a grain auger several years ago.

Covered in wrinkles, the old man's face holds lines ofdetermination. Everything comes together to give a strong-willedimpression. The most catching part of his face are his eyes, steel-graywith wrinkles bunching at the corners. Few could turn from hiscontrolling gaze. His hair is still thick and full, but as white as thesheep he tends.

Up to now, he's managed to keep his ranch. He'sstayed on longer than many of his neighbors, but it's ending. Thedrought's lasted too many years and caused too many problems. Hay andgrain prices skyrocketed. Shearing costs exceeded the return from thewool. Lambs that went to market didn't pay for their raising. He's beingforced to sell out to pay debts and back taxes accumulated over thelong, hard years.

Rather than giving the bank the satisfaction,he'll sell out privately, paying all he owes. In their expensive-lookingsuits, the bankers had waited for the day his property would be in theircontrol. Every time he floundered, they circled like starving coyotes.Every time he came back fighting, refusing to quit. Now he can fight nolonger.

His head sinks to his knees, and within his chest, hisheart no longer cares to beat. Slowly, his rough hands unclaspthemselves and he slips into peacefulness, quietly winning and publiclylosing. He could not have hoped for anything more. 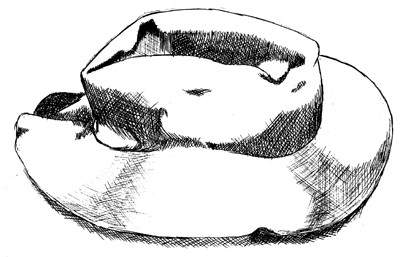 Favorite Quote:
"I do not want people to be agreeable, as it saves me the trouble of liking them." ~Jane Austen

View profile
wow! this piece has a lot of feeling. i'm really impressed. (: