They took a spaceship and sped far out away from Earth and the Milky Way and into the extended bounds of our own Universe (for there are others far, far out there), but don’t think about it too hard because it is like trying to imagine the amount of grains of rice of a large, large, large number, like 1,987,933,221,000. And these explorers, scientists, in the spirit of Columbus and de Gama and Magellan, albeit hundreds of years later, went far enough just so they may come back. And out there, far, far out in the black sky of night, and don’t imagine it from our point of view but from their’s, because again it is just to large of a thing to contain in brain cells, they turned around, 180 degrees on their tail, and just looked with a few naked eyes. And what did they see out there, in the dribbles of stars, in the twirls and swirls of galactic oceans and in the sparkling columns of dust and air and helium? They saw none less than a breathing, shifting and curving grimace of a living thing. I cannot describe to you what it looked like, of course. Try to imagine the number of stars not seeable from Earth, multiplied by the number of Earth’s grains of sand, or the number of thoughts you have had in a lifetime. Anyway, this thing, with a breath or two, seemed to communicate some pleasure, inexplicably, and some sadness. Great sadness, in fact. And it seemed to the explorers that there would be no words from it, or to it, for the immense size of this life, that encompassed and became all of their lives, and the lives of their families, at home on Earth. But they were surprised as ghosts and swooned as the gargantuan spoke:
“YOU HAVE WON THE GAME. NEXT TIME IT WILL BE HARDER.” 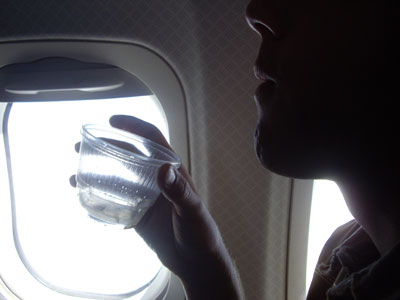