A black as coal mare trots along the side of a river; the mare casts a look over her shoulder, and then begins to drink the sweet water.

“There you are Usher”, a very angry voice says out of nowhere, startling the young mare. Charlotte’s ears lay on the back of her skull in fright and alertness,

“Who goes there?” Charlotte asked in a tiny voice as her dark brown eyes desperately scan the nearby forest for the source of the voice.

“I think you might now who d*** well goes there” the mysterious voice chuckled darkly.

“Show yourself!” Charlotte yelled rearing-up, she then noticed movement at the corner of her eye and she spun around to confront whoever was scaring her, Charlotte watched with eyes frozen as a slim black as midnight mare called Prudence appeared out of the woods swishing her tail back and forth.

She was an Arabian mix with just a little of quarter horse in her, Prue was lead mare of a herd called “The Dead Herd”, a whole herd of ghosts horses that had passed away and now roam the plains without a care in the world. Prue’s withers were completely derived of skin; all that could be seen was the bone of her withers, and her back was also derived of skin part of her spine was visible but not completely. Prue had died when a tree fell on top of her during a nasty storm; she had neglected to listen to her mother about not being near the woods when it was lightning out.

“Usher” Prue scolded, she then lowered her head. “What are you doing away from the herd?”

"I just went for a drink” Charlotte replied defensively.

“I was going to come back”

“You know better than to walk off on your own!” Prue snarled baring her teeth at Charlotte angrily.

“Prue, I’m not a yearling anymore” Charlotte snapped back.

“How dare you raise your voice to me!!!” Prue screamed angrily as she reared-up kicking her front legs furiously, her eyes went from black to a blood red; she then her teeth into Charlotte’s crest hard then violently throwing Charlotte into the river making sure she fell hard into the river.

Charlotte landing into the river with a big splash, hitting her ribs off a rock. She turned her head to look Prue straight in the eye; Charlotte slowly stood back up, her eyes went from dark brown to blood red just like Prue’s eyes
.
It's over…..” She said as she eyed Prue threateningly. 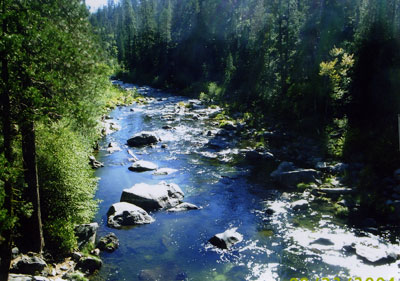 The author's comments:
Just thought I'd turn Tonya Hurley's characters into Horses. As you can see Charlotte and Prue are about to duke it out at the river. Sorry about the awful spacing it is not me it's my computer I don't know why it does that.
Post a comment
Submit your own