The JFK Airport is bustling on this overcast Friday night. Hundreds of thousands of people are walking or sprinting to catch their flights, each person having a unique destination, a unique journey, a unique story.

And that is why you are here, at this airport, to explore and discover the stories of humanity in the lives of everyday people.

Take the man sitting across from you: stubbly, dark, curly hair, youthful, brown eyes with a square jaw and wearing a pressed tuxedo with a pink lapel. In his hands is a bouquet of red roses and a bottle of champagne, the anxious tapping of his right foot causing several red rose petals to fall to the carpeted floor of Gate 48. His name is Greg Bell and he is eagerly awaiting the arrival of his fiancée, Aline, who is scheduled to arrive from Los Angeles any minute now. Only, she isn’t his fiancée yet, as seen from the small jet-black ring case that is peeking out from the top of his suit pocket. Greg has a romantic night planned for the girl that he’s been in love with for five years, including a candlelight dinner and a midnight visit to the Statue of Liberty where he plans to propose to her. His story is one of determination, loyalty and love and you wish him the best on his quest to happiness.

You turn your head to the right to gaze at the people sitting at the row of seats opposite yours: Gate 49. There aren’t many people seated at that gate yet, as the flight to Paris isn’t scheduled to take off for another 3 hours. However, there is one person in particular sitting in one of the closer seats who catches your eye: a college-age girl wearing a turquoise hoodie, black corduroy pants and brown lace-up boots. You can see her white earphones peeking out from the folds of her hoodie and, yet, her casual demeanor from the way she sits to the way her head bobs ever-so-slightly to the beat of her music is not what makes her stand out from the rest. No, it is the shocking electric-blue short-cropped hair that is peeking out not-so-subtly from beneath her hood. The eyes behind her large, cat-eye glasses are closed and she is probably relishing the sense of ease from being early to her flight. Applying to universities is a stressful process in-of-itself and it is nice to finally be able to say that she, Melanie Dupont – the bullied, quirky girl who was told she would never amount to anything in her life - has survived the college application process and is now on her way to the University of Paris where she has been accepted and will be majoring in Communications. Miss Dupont’s story of hard-work, perseverance and strength shows how just about anyone can rise above the haters and achieve what they want in life. You wish her the best of luck on her journey as her breath evens out and she is slowly lulled to sleep.

You get up to stretch your legs and walk down the carpeted aisle of the airport. You walk about 5 meters before stopping to take a sip from the water fountain to your left. You lean against the tiled wall outside the bathrooms and look at the line of people in front of you who are waiting to board their flight to Melbourne, Australia. You notice a person seated far away from the rest of the passengers who are standing up with their baggage in hand. Cory Talmud has a crewcut hairstyle and is wearing a black T-shirt, black khaki pants with black heeled-boots. The piercings in their nose and lips shine in the fluorescent lights of the airport and the way they stared at the floor absentmindedly suggested their thoughts were elsewhere. This was the sixth year anniversary of their best friend and lover’s suicide. This was also the anniversary of when Cory and Tanya first met each other at this exact airport eight years ago, them having met each other online before finally meeting in real life when Tanya booked a flight to New York. Tanya struggled from depression all her life and, after she committed suicide on the anniversary of the start of Cory and Tanya’s relationship, Cory has been coming back to this same place ever since, not only to grieve for the loss of their one true friend and the only person who ever understood them but to remember the better times of smiles, laughter and hugs with their soulmate. Cory realizes that they’ll have to start moving on with their life and stop living in the past. But Cory also knows that they’d never forget the person who made such an impact on their life and worldview. You feel your eyes start to well up with tears from Cory’s story and, as you wipe your eyes with the back of your hand, you wish Cory the best of luck on their journey of heartbreak, loss and hope.

That’s only a handful of stories from the people waiting and searching in this place of travel.

Each and every person is on a unique journey of their own, has their own unique story that they’re living in. 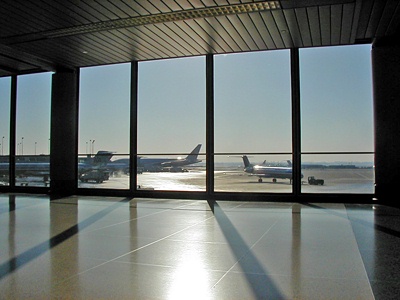