When Kristy met Sara on the first day of kindergarten, Sara had a red balloon tied to her wrist, by a ribbon the same color as the latex.

Kristy shyly walked up to her and said, “I like your balloon. It matches the ribbons in your hair and must be filled with helium because it floats. That’s what my daddy told me.”

Sara beamed and touched the red ribbons that held up her fine blonde pigtails. “Thank you! Today’s my birthday. I’m five.” She held up five fingers to demonstrate, and the balloon jerked upwards with the sudden movement.

Kristy told Sara happy birthday, and that she had turned five months and months ago.

Sara suggested that they go play on the swings, hand in hand, balloon, and all.

Kristy was more than happy to play with her new friend, excited to come home later and tell her mom all about the girl with the red balloon.

Red balloons would become their thing

On the second day of first grade, Sara’s birthday came back around. Kristy brought a red balloon to school to give to her friend.

She tied it to her backpack so that it wouldn’t fly away.

When Sara showed up with a red balloon already tied to her wrist, Kristy was disappointed that she didn’t do something special.

But when Sara took the balloon and ties it to her wrist, loudly proclaiming, “But now I have two!”, the disappointment faded.

Maybe the excitement wasn’t really about the balloon. Maybe it was about Sara.

Kristy and Sara had their first big fight after the start of middle school because Sara made some new friends in her gym class, and Kristy got jealous.

Kristy knew it was a stupid thing to be jealous over, especially when Sara reassured her time and time again that they were still best friends, but she couldn’t help it.

When she used that word with Sara-- “replaced”-- Sara went quiet.

Her mouth shut and pressed into a thin line, and she turned away from Kristy without another word.

Sara wasn’t at the spot they always met at to walk home from after school, so Kristy went without her. She pretended that Sara was walking alongside her like she always was so that she wouldn’t worry about things not being the same anymore.

She didn’t have to worry for much longer, because when she got home, Sara was standing on the front porch, one red balloon tied to her wrist, and the other clutched in her fist.

Because red balloons were their thing.

Kristy got a boyfriend first when they were fifteen, but Sara was the only person that she wanted to talk to about the first date. The first time holding hands. The first kiss.

Kristy worried that Sara would be jealous that she didn’t have a boyfriend yet, but Sara assured her that the only thing she felt was happy for her friend, then took Kristy out for celebratory Slurpees and red balloons.

Kristy believed Sara because she always did.

Sara started to fall behind in school their junior year when they were sixteen. Kristy was doing well, so she was assigned to tutor Sara since they were such good friends.

She’d never seen Sara that sad, that defeated before. Not in their eleven years of friendship had Sara been the sad, insecure one.

It was a role reversal that Kristy didn’t like.

On Sara’s seventeenth birthday, she didn’t come to school. Kristy had gotten up extra early that morning and gone to the dollar tree to buy seventeen red balloons. The balloons were sitting in the back of the car, waiting for their rightful owner, who never came.

She’d never leave Kristy like that. Or would she?

Kristy drove to Sara’s house after school, fingers tapping the steering wheel in a nervous tic, and red balloons obstructing her rearview mirror. It was definitely a hazard and probably a violation of the traffic laws, but that didn’t matter because it was to make Sara happy.

Kristy knocked on the door, seventeen red balloons in one hand. Sara didn’t answer, so Kristy tried the doorknob.

Especially not when Sara’s parents were away, like they seemed to be, because Sara’s lone car was the only one occupying the driveway that afternoon.

Kristy entered the house and called for Sara.

She climbed the stairs, red balloons brushing the ceilings, and called for Sara.

At the end of the hall, at the top of the stairs, Sara’s door was neatly shut, and a red balloon was tied to the shiny gold doorknob.

Kristy dropped her handful of balloons and bolted for the door as time slowed to a crawl and the balloons abandoned her for the sky, stopped only by the ceiling.

The doorknob turned because Sara’s door didn’t have a lock, and Kristy found Sara inside.

She always wished she hadn’t.

It took the police, Kristy’s parents, Sara’s parents what could’ve been hours to arrive. Kristy didn’t even know what time was. Nothing seemed real.

Especially not the balloon still tied to the doorknob, and the hallway filled with red balloons. Filled with Sara’s balloons.

“The balloon was the note.” Kristy whispered. No one heard her.

“She seemed so happy.” Sara’s father wrapped a trembling arm around his wife.

“It was for me. I should’ve known.” No one listened to Kristy, chalking everything up to her being a teenage girl who just lost her best friend.

No one listened to her, even though she was right.

What other explanation could there be? Red balloons were their thing.

She never stopped blaming herself, not even the first time that she took a red balloon out to the cemetery a year later, on what would’ve been Sara’s eighteenth birthday.

Her parents asked her if she really wanted to do that, then commented that it was eerie.

It would’ve been scarier if it wasn’t eerie. Death wasn’t supposed to be comfortable.

Kristy went anyway, because she never backed out of her traditions with Sara, even when Sara had left her behind. It was all she could do.

But that’s your fault, isn’t it? Kristy sometimes thought, then wanted to punish herself for thinking like that.

Now Kristy can’t look at a red balloon without having to close her eyes and see it painted on the back of her eyelids. Kristy had always believed the red balloon to be the color of blood, but not after she’d seen an abundance of it, spilling from Sara’s delicate features.

No, the bright red balloon was not the same color as blood.

Blood was much darker, but the balloon had been its marker.

No one seems to understand, the power that a single symbol can carry. It’s not necessarily a word or a scent or a sound that can be the trigger, but that stupid red balloon.

Her kids don’t understand why she only lets them buy green balloons, or blue balloons, or purple balloons. So many colors, but just not the red ones. Not even the pink or the orange, because those are too close. Because those

“But I want that one, Mommy!” The older child begs.

She shakes her head to blur the tears that rise to the corners of her eyes.

“Not today.” She gently pats her daughter’s head and hands her a blue balloon.

Her kids don’t understand why she starts to cry one day at the fair when a red balloon comes loose in the summer breeze and floats away.

Whenever Kristy sees a red balloon in the sky, escaped or cut free, what’s the difference, she hopes that it will find its way to Sara. 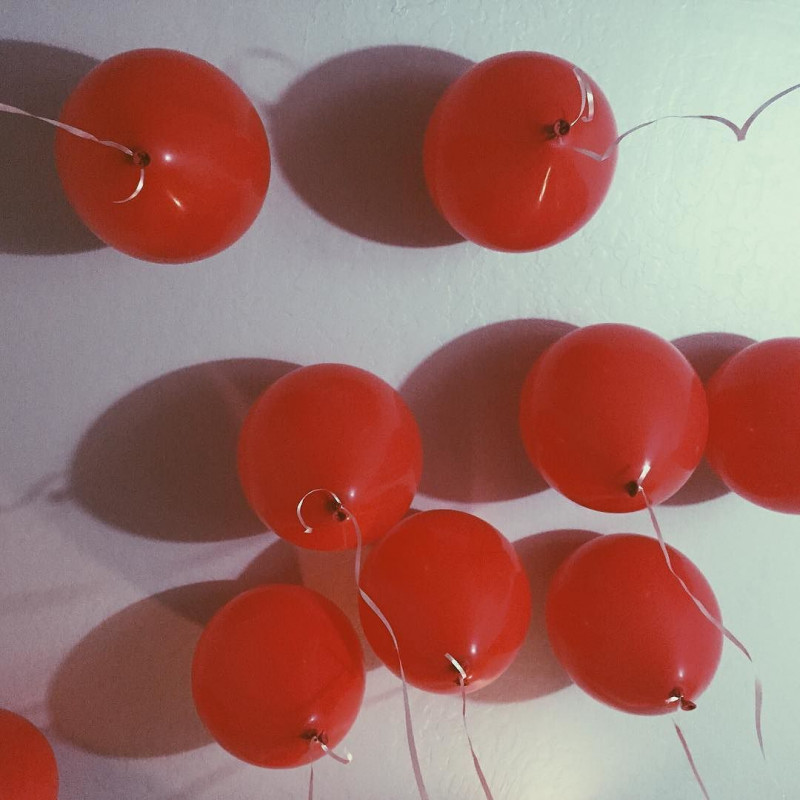 tw: this piece contains mention and reference of self-harm/suicide.

a story of friendship and loss