The Day Descending into Darkness

In the year 3088 as humans nearly depleted almost all the earth resources another problem arrives at the door. Scientists found data showing that the sun is dying and will soon depart. As the sun is dying it affecting the earth’s orbit and making most of the locations of the earth have shorter days and very extended nights. A twenty-five-year-old woman named star stares at the television as the news anchor starts explaining that the sun is slowly as the news anchor starts explaining that the sun is slowly dying, he says that certain locations on earth will soon never have sunrise again. Star freaks out and immediately calls her mom, but she doesn’t pick up, her cellphone is unavailable. As Star tries to control herself, she remembers that her dad has a bunker for emergencies, so she gathers a bunch of random clothes and supplies and stuffs them into a backpack. Star then goes outside to her car, but as she goes out the door, she sees the horizon and the light slowly going descending into darkness. Star starts to shed a tear as she knows her life is going to change forever, she snaps back into reality and focuses on going to the bunker. As Star goes down the stairs and to the apartment parking lot, she enters her car but when she put in her key the car didn’t start so she walked to her friend's apartment Solara which was in the same complex. Star knocks on Solara’s door and she opens it immediately and she is just as panicked as star, they both talk for a while and make a game plan. Star and Solara plan to go on her old vintage car and go to Star’s dad's emergency bunker and maybe bring a few supplies on the way. Star and Solara go back into the parking lot and go to Solara's car and start it up. As they start going down the street both Star and Solara see the terrifying sight of their town descending into chaos, people are starting to riot and rob stores and light cars on fire. Star is horror-struck as she realizes the world is descending into the apocalypse, the light of the fire shines in her eyes as she sees her home being destroyed. As they drive towards Star’s dad's house a man jumps Infront of their car in a psychotic way with a crowbar and stars trying to break the glass. They were able to shake the man off, but the car window was cracked. They both were shocked as to how fast people changed in a few hours. As they start coming up on a neighborhood they pass by a few houses until Star yells “STOP” by an old, bricked house at the end of the neighborhood. As they both stare at the house their eyes pan to the grey withered mailbox that has the name Knight Johnson, Star’s dad. They both get out of the car and head to the doorstep and knock on the door, they hear shuffling and noises in the house and Knight opens the door and he’s surprised but relieved that Star is alive. Knight lets both Star and Solara in his house, “do you know how your mother is” says Knight, “no I haven’t been able to contact her since the cellphone service are down, but she was on one of her business trips before this so we can only hope she’s safe “says Star.” Sir Star says you have a bunker for emergencies are we able to use it?” says Solara,” yes but it’s in the forest by the river so give me a second to grab my things before we go” says knight. As Knight goes upstairs to get supplies Solara and Star stare out the window as they see the sun almost disappears completely, and the darkness starts to completely engulf the earth with blackness. Knight comes down the stairs and witnesses the sight with them. “all right let’s not get distracted we need to get to the bunker as soon as we can. As they come out of the house, they feel a chill breeze come to them as they walk into the forest and through branches. Knight gives everyone flashlights and then they all turn on the flashlights. The group walks through the forest that is only filled with darkness and only sees the light emitted from the flashlights. They follow the path made from them Knight to the bunker, Solara collapses on the path and Star tries to wake her up, “Solara wake up, wake up” says Star. Knight yells at Star to grab her and run to the bunker Stars visions is disoriented while running to the bunker but as all of them arrive to the bunker they notice the bunker door is open and broken by the look of it and a tool and as they near the bunker they see a shadowy figure across the hallway. 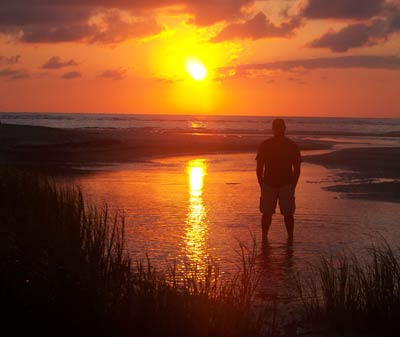 I think it's interesting that the scenario is very plausible in the real world but very far fetched, still very interesting to write the idea of it.