Conversations with Myself | Teen Ink

Shaking my head gently and with the slightest of a smile I turned to him and said,
" You know...it really doesn't matter to me anymore."
He was so taken aback that I didn't even have to interrupt him as planned...but I pretended like I had anyways. -
"BeCAUSEEE I'm my very own person. I'm not only happy, but I'm also comfortable in my own skin. My very own skin."

I paced around the room, picking up random knick-knacks and handling them delicately.
He shifted his weight nervously from foot to foot.
"I've realized lately that everyone wants to bring down the person they can't become. The person who's got it all figured out without trying...the person who's pieces of the 'puzzle' seem to just fall right into place. And you know why? Because they're all such a deep green shade of envy that they don't care about anyone but themselves anymore. All they want is to steal the happiness right out from under you. They think that maybe, just maybe, they could pull your happiness from you and glue it back into the hole where their's used to be. But it doesn't work like that."

He wasn't even looking at me.
I raised my voice.
"Happiness cannot be traded, or exchanged, or even stolen. You've gotta earn that s***! But the ones who are too weak and lazy and self-righteous to try and get their own happiness think they can just JACK MINE."

He looked at me with the blankest look I've ever seen on a living, breathing human being.
At least he was paying attention now, the smug little b******.
Sardonicly, I continued...
"Maybe it's my fault...maybe I haven't spent enough of my life trying to make other people happy, so God is punishing me. God is punishing me by forcing the cold and emptyhearted youth of the nation to steal my joy. That's gotta be it. Tell me, please, tell me - when do I get to just live my life for ME? When do I get to just breathe without feeling guilty for sucking in someone else's oxygen? Why can't I feel anything but angry?"

My emotions started to fight their way out of my brain and into my tearduct. I blinked them back, swallowing several times to banish the lump in my throat back to its biley grave.
He sighed a heavy sigh and landed on the couch in one fluid collapse.
There was still nothing in his eyes.

"I'll tell you why, darling. Because everyone's stolen my happiness, so anger is all that I've got left. I can't even be despondent seeing as how I've got no heart to be sick about. They can't even use it, seeing as how it isn't theirs, so my Stolen Happiness is probably just laying in some landfill in North Dakota somewhere, waiting for some lucky dog to come by and gobble it up. Happiness tastes like bacon, didn't you know? That's why dogs are always smiling." 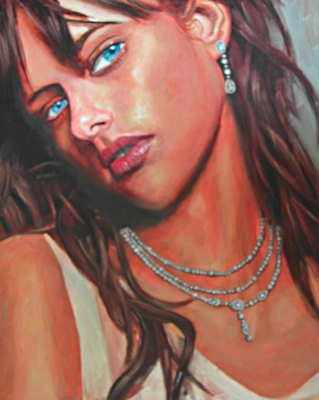 The author's comments:
I think this one is pretty shaky - feel free to critique!
Post a comment
Submit your own

Favorite Quote:
"Yet what is any ocean but a multitude of drops?"

Favorite Quote:
"How often does one swell to one's own insignificance?" - Thai adage

View profile
Great ending. You ahve a way of ending your pieces with some humor or bittersweet thought. Also, I think you'd be good at writing plays. There was one part in the middle where I thought "wow, that would make a great monologue"
Supriya PLATINUM said...
on Jan. 1 2011 at 12:16 am
Supriya PLATINUM, Palampur, Other
20 articles 1 photo 25 comments

Favorite Quote:
Poetry spills from the cracks of broken heart, but flows from the one which is loved.

Favorite Quote:
'Before you insult someone, walk a mile in their shoes. that way, when you insult them, you'll be a mile away from them and you'll have their shoes.'

View profile
wow. that is so great. i love it. it seems to just fit. like an answered always searched for, it makes perfect sense. great job!
cyanidesun BRONZE said...
on Jun. 24 2010 at 2:13 am
cyanidesun BRONZE, Atascadero, California
1 article 0 photos 28 comments

View profile
I absolutely adore your writing! It's extremely difficult to write with such personalized views that you use in your characters, and you do it so well! The cynicism, the comedic timing, the commentary? It's all so flawless and original. Albeit, there are a few grammatical errors, but your writing is beyond lovely. Bravo.
SarClark BRONZE said...
on Feb. 24 2010 at 6:59 pm
SarClark BRONZE, NC, Connecticut
2 articles 0 photos 534 comments
View profile
Love love loved it "happiness tastes like bacon, that's why dog's are always smiling
babigerl1194 PLATINUM said...
on Feb. 24 2010 at 5:22 pm
babigerl1194 PLATINUM, Margaretville, New York
23 articles 10 photos 155 comments

View profile
to be honest i been stalking you. jk jk ive beem readin ur work tho and u sound amazing <3 u should be writer u have me hanging on everyowrd. and i really wanna meat you know. im just curios tho are these really real or made up scenarios. i myself write but think im horrible if ud giv me feedback itd mean alot since i love all your work. <3
bamboom212 PLATINUM said...
on Feb. 2 2010 at 3:15 pm
bamboom212 PLATINUM, Chestnut Ridge, New York
23 articles 0 photos 155 comments

Favorite Quote:
"The truth with a bad intent, is worse than any lie you can ever invent."
"You are smarter than you think. You are stronger than you look. You are braver than you feel."

View profile
tigerlynn and annabelle pretty much said it all. I have to admit, i've read alot of ur work and i just luv it. ud definetly excel at becoming an english teacher! :))
loveibanez BRONZE said...
on Jan. 21 2010 at 4:06 pm
loveibanez BRONZE, Maumee, Ohio
4 articles 1 photo 63 comments

View profile
Really awesome, powerful and thought-provoking. I love all your work. It's so true and well written and I hope you post some thing new soon!
Annabelle7614 said...
on Nov. 11 2009 at 6:36 pm
Annabelle7614, Nunyabusiness, Georgia
0 articles 0 photos 97 comments

Favorite Quote:
This is my favorite personal quote.

View profile
I agree with TigerLynn.

You would be really good at writing down to earth, totally believable teen books. You are really good at communicating what teens go through. I love reading what you write because it's so raw, and there's no sugar coating. Just the cold hard truth. I'm sure everyone who reads your stuff agrees with me.
TigerLynn GOLD said...
on Oct. 15 2009 at 8:22 pm
TigerLynn GOLD, Maysville, Kentucky
10 articles 0 photos 110 comments

Favorite Quote:
"She walks in beauty,
Like the night of cloudless climes and starry skies;
And all that's best of dark and bright
Meet in her aspect and her eyes."
--Byron

View profile
I love THIS! I do understand and the parts that i didn't you cleared up in the explanation to the other person who commented. you said it is shaky but girl if this is the shakey stuff you need to apply yourself completely and you will find the result to be masterpiece! you are one of the best writers on the site! KEEP IT UP! On your profile it says you want to be and English teacher and i think you would excel at that but you should also write many books for us! it is your duty with all that talent to share some! Good luck even though you don't need it . You are purely awesome.
windblossom said...
on Oct. 1 2009 at 12:05 am
windblossom, Hyderabad, Other
0 articles 19 photos 87 comments

View profile
Ahh! that makes things a lot more clear! I did read your other work, its really great! :)
Bassoonkelley GOLD said...
on Sep. 30 2009 at 5:11 pm
Bassoonkelley GOLD, Tampa, Florida
15 articles 0 photos 49 comments
View profile
Honestly, the emotions behind the narrator's voice come from several different places. It sort of represents feeling beautiful even though people are always trying to bring you down. The narrator is irritated that no matter how much she tries to ignore insults or criticism, they always end up getting under her skin anyways. Thanks for the comment, feel free to take a look at the rest of my stuff!
windblossom said...
on Sep. 30 2009 at 10:09 am
windblossom, Hyderabad, Other
0 articles 19 photos 87 comments

View profile
though i didnt understand some parts of the story, its really well written! i would really appreciate if you could just brief me about its theme! :)