It’s so hard for me to believe. I mean, just yesterday Jeremy was here, dancing around the room and now he’s gone. I want to hate my parents, blame them for my brother’s departure, but all I feel is a numbness I can’t escape. Though four years separated us, Jeremy was my best friend. He didn’t lose him patience with me or stick my bras in the freezer or hit on my friends like other brothers I knew. He was kind and caring. He listened to me and offered his words of “wisdom” to my younger years. And for as long as I can remember, he always welcomed me back with open arms if I got mad at him. He was also my protection from the harsh consequences of my parents – I mean my foster parents. Jeremy and I had been with Carrie and Jack Jensen for almost ten years, and up until a couple of days ago, I had always loved them. We argued plenty and I was no stranger to their sometimes cruel punishments, but they were as close to role models as an orphan girl could get, and at the end of the day, I loved them. But now Jeremy is gone. All because he decided to be honest. I knew from a young age that Jeremy was gay, and a couple of days ago, he decided to come clean and tell Carrie and Jack. Now, Carrie and Jack are devout Catholics: they didn’t believe in gay marriage. We live in Massachusetts, though, so it’s legal here, but they still strongly opposed it. Anyway, Jeremy told them, and at first I thought they were going to be supportive because all they said was “okay”. But as Jeremy grew hopeful, Carrie said, “Go pack your bags.” Jeremy, knowing it was fruitless to argue, went upstairs to get his stuff together. I, enraged, ran into the room.

“What is wrong with you?!” I screamed at them. “He’s practically your son and you’re driving him away!”

“I don’t care what the Bible says! All I care about is that my brother and best friend is leaving because you’re making him!”

“Melissa, you listen to me, young lady--”

“I will not listen to you! I hate you!” It was the first time I had ever said that to them, although it occasionally crossed my mind. No sooner did I say those words that my parents – foster parents – reacted. Just as Carrie opened her mouth to say something, Jack came over and slapped me across the face. Hard. So hard that I fell to the ground and could feel the stinging blow of each fingertip etched onto my skin. It was the first time Carrie and Jack had ever laid a hand on me.

“Jack…” Carrie whispered, but he just stood there, breathing heavy and looking cruelly triumphant. I thought maybe he would apologize to me at the time, but the two of them just turned away and walked out of the room.

I don’t know how long I stayed there on the cold faux hardwood floor, but eventually I stood up and went upstairs. When I reached Jeremy’s room I knocked.

“Jer,” I said, my voice coming out hoarse and vulnerable. “Please…let me in.” I felt tears sting my eyes for the first time today. He opened the door and saw my face: the red outline of a handprint harshly stinging my left cheek.

“Mel,” he said cautiously, “what happened to you?” I let him pull me into his comforting arms.

“Don’t leave me, Jer. I don’t think I can bear to see you go.” Jeremy sighed. His voice was raw emotion when he answered.

“It’s time for me to go.” The next morning, my Jeremy was gone.

Now three days later my heart is raw as ever. I don’t know who to turn to. It’s not like anyone at school would care if I left. I’m alone. Why did this happen? I need an answer that no one will give me.
*****
A letter arrived in the mail for me. I’m so scared to open it.
*****
It’s from Jeremy.

Dear Melissa,
Oh, honey, where do I start? I love you and I miss so much. I’m in New York City with Aunt Jillie. She welcomed me without questions. I’ll tell her what happened, but I’m not ready to talk about it yet. I’m looking for a job here; I think I’ll stay awhile.
Love,

I know what I have to do.
*****
New York is amazing. Aunt Jillie is so happy I’m here. Her face is glowing, she’s smiling, and when Jeremy’s face lit up when he saw me, I think it warmed her heart.

“How did my little, fourteen-year-old Mel get here all by herself?” he asked joyously when I walked through the door.

“Does it matter?” I countered happily. He pretended to think about it.

“Nope. Not one bit. All that matters is that you’re here now.” Jeremy’s smile made my day. “What about Carrie and Jack?” he asked, suddenly worried.

“I called them,” Aunt Jillie piped in. “They don’t really care.”

“What do you say kid, want to make this your permanent residence?” I smiled.

There’s no one in the world happier than me. 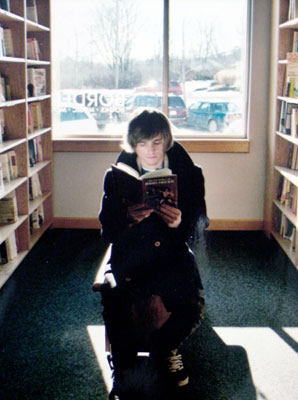 This is pretty interesting :)

View profile
thnx i appreciate it. i wuz attempting to make it more like a diary style - if that clears up why i did long paragraphs
pandafyre BRONZE said...
on Sep. 9 2010 at 6:10 pm
pandafyre BRONZE, Grinnell, Iowa
3 articles 0 photos 14 comments

View profile
Try breaking up any super long paragraphs. Avoid ending with bland statements--I think ending it with "I think I'll stay awhile" would have left an even greater impact. That said, I can relate to the narrator when she talks about her love for her brother, so you do a good job connecting your story to the reader :)