I boarded the bus from school with a growing ache in my belly. Periodically a rumble would erupt from my abdominal region that I had no way to silence. I couldn’t tell if the kids around me could hear the desperate calls of my innards, but the benefit of the doubt did not occur to the mental trigger that made my face flush in instantaneous reaction to the call. By the time the bus finally pulled up to my stop it was the most I could do to offer the driver a murmur of thanks before bursting out in a sprint toward my house. Upon arrival I ran straight to the kitchen, following a hauntingly savory scent I had half a mind to suppose was mirage. It turned out that the scent had a physical, tangible, real origin, borne of earthly facets as opposed to my own mind. As the fog on my glasses slowly evaporated more and more became apparent. A note, pasted to the toaster reading: “Margaret’s dinner. Eat before swim team @ 6. See you then. –Mom”. My heart gathered speed, so the scrumptious smelling edibles were really and truly intended for me! I pulled out a plate and fork and used those instruments to most carefully extract my prize from its smoldering chamber. I did not recognize the mass I beheld. It was a white and squishy (nowhere near viscous but not entirely firm either) something enveloping a lumpy yellowish- stuffing type matter. It smelled appetizing. But at the same time, there were poisons and drugs and nasty vegetables that smelled appetizing. How could I tell if this was one of those? At that moment, a certain canine resident of my house entered the kitchen and approached me (most likely with the intent of a thorough sniffing, probably knowing that I do NOT appreciate such treatment) then the idea struck me. I could feed the dog of this mysterious substance to test for toxicity. Recalling one of my dear friends stories about her own canine resident ingesting bleach and surviving, symptom- free, (which I suspect I was incapable of), I decided it would be most beneficial to run multiple trials for toxicity using the volunteer before me and also our neighborhood alpha-feline, Heidi, who was at the moment having a whimsical winter sunbath in the front window. Taking two tiny cuts of the mystery substance and feeding it to each patient, I commenced study. Heidi was considerably disgruntled upon waking, but was pacified with my (possibly) food offering. She chowed down and showed no negative symptoms for several minutes following ingestion. I moved to my next subject, the pooch. He spent a good 45 seconds sniffing the substance before licking it up, spitting it out, and then licking it up again. He promptly lay back down and continued chewing on the sock with which he had been previously engaged. As I watched him further, the sock disappeared, but the mystery substance made no reappearance. I returned the kitchen, concluding that the substance was most likely safe for humans to ingest. Just as I was bravely bringing a forkful of substance toward me, my own mother entered the kitchen grumbling. Upon catching sight of me and the substance she declared, as if full of shock and disappointment “Margaret! You still haven’t finished you stuffed sole? We have to go!” Aha, sole. I had heard of this dish. A form of formerly marine cuisine popular in France. Mystery solved. 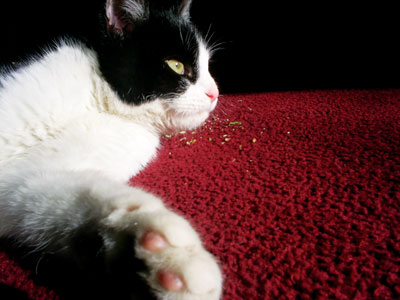 The author's comments:
written on a whim after my first experience eating sole.
Post a comment
Submit your own