Maeve wandered across the stage, every once in a while turning. Her ribbon dancer spun up, down, and through the air like a snake. It chased Maeve in a continuous dance of grace and beauty. It did not stop unless Maeve told it to stop. It spun in the air, all the colors of the ribbon mixing together. A flash of blue, red, orange, yellow, green, and purple raced through the air like a mad bird. She was completely caught up in the ribbon’s beauty until she heard her acting coach scream, “Stop, Maeve, stop!” for the fifth time. Maeve brought her arms to her sides, and looked calmly at her teacher.

“Yes?” She asked, smiling slightly. She heard giggling from the other students, and her face flushed. Not enough for her classmates to notice, but just the right amount for Ava to.

Ava shook her head, and pointed to a chair next to a girl named Riley. Riley smiled at Maeve, and her stomach flipped over itself. Riley was a small, dark haired girl with pale skin. She was a brilliant actress, and much more outgoing than Maeve. Today, because of tryouts for parts in the play, 10 Things I Hate About You, the actors were given orders to wear all black. Riley was wearing a small black tank top that showed her belly button, and tight pants.

Maeve sighed, “Oh...” She looked over at her best friend, Nolan, and wished with all her heart that he could hear her thoughts. Come sit by me, Nolan, she begged him with her eyes. But he was too busy flirting with Eden, a blonde boy in their new class. Maeve sighed again, suddenly in a bad temper. She slumped in her seat next to Riley. Riley leaned towards Maeve, and grinned her white-toothed smile.

“Hey there… I’m Riley!” She stuck out her hand.

“I know,” Maeve murmured. Riley left her hand hanging in the air for a second longer, until realizing that Maeve was really, honestly, not going to shake it. Riley turned back to the stage, seemingly not bothered by Maeve’s coldness. An awkward silence settled between them.

Ava snapped her brittle fingers together, and strangely a loud pop came out. “Come here, class. Gather around me,” the students all stood up, nervously looking at each other. Eden and Nolan sat down next to Ava, and Riley quickly rushed to Ava’s other side. Maeve shook her head, her eyes giving away her thoughts. Wow, that girl is desperate. Riley looked at her feet in shame. Guilt crossed Maeve’s mind for a moment, but it passed as soon as it came. Maeve sat heavily on Nolan’s other side.

“Now, now class. Let’s think about what parts we want in this magnificent play,” everyone looked around at each other. “There are about a hundred people trying out for this play, and there are thirty three roles to be filled. Therefore, some of you must leave,” she smiled a grim leer, looking at each of the teenagers as if they were chocolate. Which, they almost were. Maeve straightened her back, and moved closer to Nolan. They held hands, and listened to Ava talk.

Ava set everyone up with partners. To Maeve’s great annoyance, Ava put Riley and her together. “Now, girls,” Ava smiled her evil grin again, and placed her hands on the girls’ shoulders. “Play nice,” Ava wandered away, leaving the girls to mirror each other.

It was silent for a good thirty seconds, just like Maeve wanted it to be. But then, Riley didn’t care what Maeve wanted at that point. “I don’t understand what your problem is with me,” and Maeve grimaced. Really? Do I have to get this girl’s ego up? Maeve wondered.

“I have no problem with you,” Maeve squeaks, and Riley pointed her finger, making Maeve point hers. Their fingers touched, and a spark flew between them. They both screamed, “ow!” at the same time. Ava clapped.

Riley looked at Maeve really closely, and just as she was about to say something, Maeve clasped her hands over her own mouth. Riley had no choice but to do the same. They didn’t talk for the rest of the exercise. And after it was done, Maeve avoided Riley for the rest of the class. While Nolan and Maeve waited for her boyfriend to show up, Nolan asked her, “Why do you hate people so much, Maeve?” She looked out the window, searching herself for an answer.

She turned to smile at him. “Cause I have you, Nol,” she rested her head on his shoulder. “And Owen, of course,” Nolan smoothed her hair out, and they waited in silence.

A week of rehearsals later, Owen dropped Maeve and Nolan off at their class. “Baby,” Owen whispered after he and Maeve kiss, “when am I going to see you again?” Maeve ran her fingers through his spiky blonde hair. She kissed him again, without answering his question. He shook his head, and drove off.

Nolan placed his hands on his heart, and fanned himself. “Baby, when am I going to—ouch!” He squealed as Maeve punched him in the arm. “Don’t hate, Mae. I’m just jealous,” he winked. “You know that,” so Maeve shook her head to drop the subject.

“We better get inside,” Maeve said sternly. “We don’t want Ava to kill us.” They began to make their way to the front door of the building when they hear a squeal behind them.

“Hey guys!” Eden shouted. He ran blissfully up to Nolan, and gave him a hug.
“Let’s look at what parts we got!” They ran into the short stone building and up the lengthy stairs. Panting, they tripped into the acting hall. If front of the board were almost a hundred people, pushing and pulling to see the board. There were shouts of joy, and sobs of distress emanating from the crowd. Eden grabbed Nolan’s hand, Nolan grabbed Maeve’s, and they forced themselves into the pulsing mass. After several minutes of violent shoving, they got to front. Eden looked jaded as he turned around and yelled over the sobs, “I got Walter Stratford.”

It was not a very good part, but at least he got one. Nolan shoved himself into the front, and stared at the list, clutching Maeve’s hand tighter and tighter. At last, he turned around, and looked like he was about to cry. “I-I-“ Maeve was shocked. How could he have not gotten a part? He was brilliant! “I got Michael Eckman!” He jumped up and down with joy, and hugged Maeve. Maeve congratulated him, but she couldn’t speak. Riley had just shoved herself to the front, and yelled, “I got Bianca Stratford!”

Nolan looked at Maeve, who liked like she was about to cry. “I know you wanted that part, May.” He gave her a sorrowful hug, and held her hand as she searched for her part. Shocked, she whispered, “Mandella?” When she turned around, Nolan and Eden were looking expectantly at her.

“What part?” Eden shouted over the moaning and yelling of the crowd.

Eden asked because he couldn’t hear her, “What part?” But Nolan had read her lips; they both looked shocked. They forced their way out of the crowd, and by the time they got out, Maeve’s part had sunk in. In the play, Mandella was not a very big part. She was very funny though, and for some reason, Ava thought Maeve deserved that part. And that Riley, the same Riley who made Maeve want to punch someone in the gut, got the part Maeve wanted. 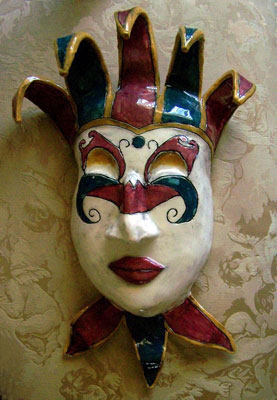 The author's comments:
I can relate to Maeve because she reminds me a lot of myself. Actually, all the characters are based off the people in my acting class I took a couple years ago. The pressure to do better than all the other actors is enormous and a lot of the time pushes people away from each other.
Post a comment
Submit your own