On the Road | Teen Ink

Chris was beginning to question the wisdom of this trip. Maybe it was because traffic was packed so tightly that her aunt’s Ford Escape had moved about six inches in the past half hour. Maybe it was because the stuffiness and heat of the car was making her stomach churn.
Or maybe it was her cousin, Casey, sitting in the driver’s seat, gesturing rather obscenely and enthusiastically to the truck in front of them. Casey was hardly known for her wise decisions.
Chris closed her eyes and tried to make everything—the traffic, Casey, her nausea—disappear.
It didn’t work.
“Casey,” Chris said finally, “Is that really necessary?”
Her cousin pulled her head and shoulders back into the car. “What?” she asked Chris, shaking her dark hair away from her sunglasses. “That guy just cut me off! And then he gave me the finger!”
Chris squeezed her eyes shut tighter. She considered telling Casey about the tragic incidents sparked by road rage that she had seen on CNN. But that would be pointless. Her cousin would just roll her eyes and say “Oh my God, Chris,” like she usually did.
Instead, Chris kept her mouth shut. Her stomach was rolling and twisting. Twice she feared that she would lose her lunch. She grabbed a crumpled McDonald’s bag left on the car floor from one of Casey’s previous meals and shut her eyes again.
Casey eyed her and the bag. “Are you going to throw up?” She asked. "'Cause, if you are, you should lean out the window or something.”
Chris ignored the suggestion and opened her eyes. “Um, Casey?” She asked hesitantly, “Why are we doing this?”
“Doing this?” Casey repeated. “Chris, this was your idea.”
Chris swallowed. “My idea?” she asked weakly.
“Yes!” said Casey. “Yesterday when I said that I live without regrets, you said that you don’t really have any regrets only because you haven’t done anything with your life.”
Chris recoiled. She had said that. However, she had never suggested that they should steal Casey’s mom’s car. Or that they should drive three hours to the city without actually telling anyone where they were going.
There was a long silence. Cars in front of them shuffled forward. Casey pulled up.
“Well, hey,” she said, socking Chris in the arm, “You’re living!”
Chris fought the urge to put her face in her hands and cry.
“Besides,” Casey said, bringing the car forward a few more feet, “It’s not like you can blame this whole thing on me. You didn’t have to come. You could have told me no.”
Chris looked out the window. Could she have said no, she thought a little bitterly. And what good would have it done her?
Casey was so alive and strong, so good at getting what she wanted. Chris, on the other hand, was good and wanting and wishing and keeping her mouth shut. Getting had never been a strength of hers.
She had always followed Casey. Suggesting she didn’t have to was like suggesting that birds didn’t have to fly; Chris supposed they didn’t have to, they just did.
“No,” she said, trying the word out. It didn’t feel sharp in her mouth as she had expected it to.
“No?” Casey asked. “No what?”
Chris pressed her lips together and looked down at the grey polyester carpeting of the car.
Casey scoffed. “Are you seriously practicing saying ‘no?’’’ She rolled her eyes behind her glasses. “Oh my God, Chris.”

Chris decided to keep her mouth shut after that. She was good at it. 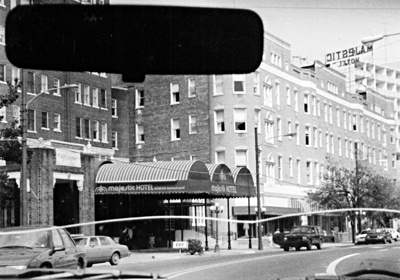 The author's comments:
I wrote this as part of a creative writing class. We had to start a story with the sentence, "Chris was beginning to question the wisdom of this trip."
Post a comment
Submit your own