An Idiot's Guide to Staying Dry and Avoiding Trouble

Favorite Quote:
"If you want a rainbow, you gotta put up with the rain."

I wandered aimlessly through the bowels of the structure trying to uncover an unsuspecting vendor selling some protection from the rain. The only thing I discovered was one small booth with nothing to sell. As I approached, several other people followed my lead. I walked up and asked where I could find a poncho to beat the relentless elements outside. The bearded hippo rose up from his resting state and sharply answered my question telling me that a box would be arriving here at any time. Resisting the temptation to depress my partially thawed fist into his crumb laden, burly face, I calmly waited in line with others.

As I waited for a supposed shipment, the sweet odour of fresh baked bread drifted past my nose. I had no idea where they were coming from until I turned around and saw a man in a burgundy apron removing hot dogs buns from three bags and placing the buns in the display window of his booth. While the thought of a nice warm, processed meat tube seemed oddly inviting, my focus moved toward something else. Standing there, still dripping from the rain outside, I was beginning to grow impatient about the ponchos.

At that moment, a newly defrosted neuron fired. My intuition went in to full gear. I thought if I couldn’t buy something to protect myself from the rain, I would just make one myself. Diving at the rubbish bin, I drove my hand down into the dark abyss of the stationary canister. My hand searched for the right texture of what I desired. After rummaging through what felt like an empty drinks can and some napkins, my hands flew out of the bin to reveal to my eyes the fruit of my labour. I was now the new facilitator of three, freshly discarded hot dog bun bags. With the loot in hand, I made a mad dash for a quiet area in the corridor.

Like a robber trying to mask their identity, I proceeded to punch the bottoms out of two bags. The other bag I sat aside for the moment. I took the two mutilated pieces of plastic and pulled them over my boots and up on my thighs which were mostly dry by now. With both legs covered, I took the other bag and placed it on my head. My new outfit was complete.

Looking like something out of a psychotic Ralph Lauren ad, I proudly strutted my new wardrobe as I made my way back to the seat. As I sat in my seat, many curious eyes examined me. My parents burst out in laughter along with a few other people. At the moment, I didn’t care about anything except the fact that I was dry. As I focused once again on the empty court, I began to notice that the bags weren’t doing their job. While they kept me dry from the falling precipitation, they lacked any sort of insulation. The future did not look bright.

A man on a loud intercom yelled for the players to come out. The roar of the people surrounding me was like being right behind the jet of an airplane. The deafening noise made me squint my eyes. I opened them though and stood on the lightly cushioned seat. Clapping my hands along with the other fans, the action caused me to make a rustling sound, much to the amusement of my mother. I looked down towards the court where the players had now started shooting baskets. Their brightly coloured uniforms stood out in the glare of the spotlights above. The court had a waxy look, like it had just been swept, and the glass backboards, had a shine as bright as a new car.

The band started playing a song and the crowd swung their arms back and forth through the air. The mass of people moving looked like a field of wheat blowing in a spring breeze.

A lady rubbed up against me as she moved down the aisle. Her jeans had cracks, and they feelt as dry as a lizard’s skin that has spent the day in the desert.

Suddenly the man in front lets out a shout and starts pointing at the court. Following has movements I see that one of the players has picked up the mascots chair and is swinging it in the direction of another player from the opposite team.

Acting on instinct I cried, “Look out!” As did many of the other fans. But we weren’t heard in time. In a split second the chair had been tossed… only to make impact on the opposing player’s head. He was now lying spread out on the ground, unconscious and blood was trickling down his face from a nasty head wound.

Members of the crowd started getting rowdy, and fights were breaking out between fans. My parents grabbed me, “Let’s go. Now.” I rose from my seat and quickly made my way back into calm, warm interior corridor. The noise from the rowdy crowd seemed subdued, whether it was from the weather or the fact that police sirens could be heard approaching in the distance. Either way, it was bearable to leave your ears uncovered without getting a migraine. My eyes were taking in all the possible sights as I approached the exit.

As I walked toward the car a mass of cold, wet molecules, I looked back one last time at the stadium. The lights were still shining brightly through the falling rain. The sound of the announcer telling people to calm down could definitely be made out above the continuous patter of raindrops on the pavement. Sitting down in the car, I realized that I was still wearing my plastic hat and chaps.

Shedding my plastic cowboy apparel, I fell back on the seat and watched the raindrops silently whisk past my face on the window as the car left the parking lot. My dad drove the car up past the front of stadium so we could get one last close look at the drama that was currently unfolding. The police had finally arrived and people were being torn apart and restrained. With a final parting gaze, we sped off home. 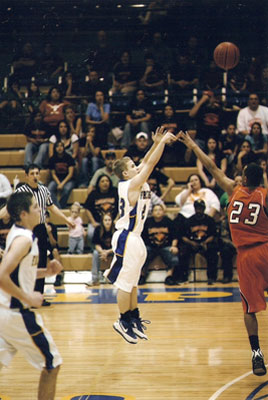 The author's comments:
A dramatic piece about a sport that I had to write for English. Hope you enjoy and all feedback is welcome. Thanks! XD
Post a comment
Submit your own