The Grand Museum of Aviation in Golden, Colorado did not live up to its name. It was a rather small building consisting of two clustered display rooms on the ground floor and a gallery of dioramas upstairs. The exhibits haven’t changed in the last fifteen years and even though it was a museum of aviation it only contained one display of a plane, one that was significantly scaled down to size. Everything in the museum could be experienced to its fullest extent in a little over an hour, an experience not worth the five-dollar suggested donation. The fact that this tourists nightmare remained in business is more fascinating than all of its exhibits. In fact, the only reason it is even called The Grand Museum of Aviation is because it is located on Grand Street.
All the old folks in town have already seen the museum and it isn’t the kind of place one comes back too. Every one under the age of forty has altogether not cared to see the museum. So because of the lack of interest from just about everybody, the building is constantly empty, meaning that there are hours in which the only person there is its elderly desk clerk, Rose. Rose doesn’t like to leave her desk more than three times in a workday. She is far too old to bustle about the museum and her legs might fall off if she went up the sharp stairs to the gallery more then once a day. It was because of its lack of adult supervision, and private atmosphere that the Grand Museum of Aviation in Golden, Colorado became a popular make out spot for teenagers.

At one point in her life Rose would scream and yell and wave her cane at the romancing teenagers. But she has tried to leave that behind. She had promised herself that she would stop yelling on the same day she promised to stop wearing the fake wedding ring. She was tired of being “that “old lady. She hated the looks teenagers gave her, even the ones who weren’t joined at the mouth in some corner upstairs. She didn’t want to be some anti–kissing banshee; she just wanted to be a person. And as a person who has been relatively alone for most of her life Rose knew the pain an ugly look can cause. She stopped going upstairs altogether; if she didn’t catch the teenagers then she couldn’t yell at them
The familiar beepboop of the gargled electric chime that accompanied the museum door stung throughout the room. The noise startled Rose enough to cause her to knock over the only picture that’s ever been on her desk, a picture of her fake son Asher/Ben. Although Rose never had any children, she didn’t want the whole world to know that. People might think she was an old maid, and she couldn’t have that. So she bought a cheap wedding ring for herself and found a stock photo of a twenty-something in a football jersey. That boy in the football jersey was her “son”, when people asked, which they didn’t often, she used to tell them her boys name was Asher but when she thought about it she realized that Asher sounded a little too Jewish for her taste so she changed the name to Ben. She didn’t consider the fact that the people whom she already told her boy’s name would be surprised at the sudden change. When the door abruptly opened Roses elbow struck the picture, causing it to fall to the floor. Rose didn’t want to get out of her chair to pick up the fallen picture frame, so she let it stay where it was. It could wait. It wasn’t broken.
A teenage couple entered the room hand in hand. They didn’t notice Rose. They had the common decency to pretend to look at posters for a minute and a half before commencing in hanky panky. At first Rose was in complete shock, most couples would at least find a quiet corner upstairs before they tore each others mouths apart, but these two just started smooching in the wide open room. The boy was large and wore a tight black hoodie with some form of joke written on the front. He was unattractive, but the girl was even more so: she looked as if she rarely smiled and showered even less. They were ugly kissers. Rose’s natural reaction to the kissing was to hiss and screech but she stopped herself before she did. She was so tired of being an old lady. She would be nice and polite and indicate for them to stop very calmly. She was not going to yell.
Rose dug around in her purse before she pulled out a single butterscotch candy. She began to unwrap it as loudly as possible, but received no reaction from the couple. She slid the candy into her mouth and began to chew like a horse. As she loudly crunched the hard candy she rolled her desk chair over creaky floorboards hoping to make a lot of noise. As she began to clear her throat she noticed something about the couple; they were both wearing headphones, each listening to different music as they suffocated in each other’s mouths. Rose, very determined not to yell and even more determined to not get anywhere near them to break up the episode, decided she would give up. She could endure the kissing unless clothes started flying off.

Situations like this made Rose wonder if the only purpose of children was to make other children. It made her wonder if in the scheme of things nothing mattered in our lives as long as we kept reproducing, continued the ever so vital existence of our race. That’s what animals do, reproduce and die; are humans any different? At times humans seem more animalistic than the most gnarled beast on the planet. Rose was anything but an animal. She felt like this made her purposeless. And perhaps it did. What would change if Rose was gone? Her tombstone might as well read, “ Who the hell is that?” or “Here lies an unnamed useless hag”. As she decided to draw a tombstone with the latter epitaph on the napkin from her lunch, she took, a pencil from her desk and began to outline a detailed grave on the thin paper.


At that moment she heard the hard smack of the lovers lips come to a halt. At first she thought they had stopped, but then realized the kissing only paused so the boy could groan “I love you” to his girlfriend, who responded to the statement by licking the boy’s face. Rose silently hoped they both died early deaths.
As the girl withdrew her tongue from the boyfriend’s cheek, he turned his head in Roses general direction and jumped. He shot Rose that nasty look she hated so much and said,
“Ew God there’s some lady watching us, what the hell is your problem you old b****?”
Rose didn’t respond.
The girlfriend did, “Baby, be nice I don’t think she was watching”
This evoked a disgusted sounding “huh” from the guy.
The girlfriend continued, “I noticed her like five minutes ago, I saw she wasn’t watching us so I didn’t stop our connection. Look, she couldn’t of been creeping on us, she’s drawing a little doodle.”
This left Rose speechless.
The boy responded with, “Well I think she’s a f*in’ creep!”
Faster than Rose could interject, and with some new found boldness, the girl proceeded to say the most important thing Rose would hear in her life.
“Well she’s also a f*in’ human being and she deserves something.”
The impact of those words nearly knocked Rose over in her seat. She liked that, she liked that saying a lot.
After a long and awkward stare down, the guy mumbled sorry to the girl with zero sincerity. He didn’t care. He just wanted to make out more. Reluctantly the girl forgave him and they left together, forgetting about Rose the instant they joined hands. As they left, Rose took a moment to breathe and soak in the situation. She did the only thing she saw appropriate to do and began to “engrave” her napkin gravestone. 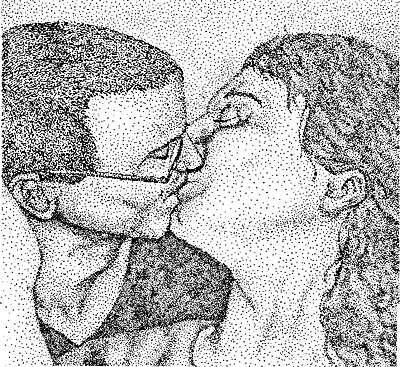 View profile
I liked it. The lady seemed somewhat crazy and I liked that, All together, I enjoyed it.