I look at myself in the mirror. Bruises and cuts. They run the length of my body, defining me. They weren’t me though. But who would ever find out unless it ended. He kept me on a tight leash, never letting me out of his sight. He had put a chip in my neck, like one would do to an animal. That chip monitored me, following my movements like a bloodhound.

I tear my gaze away from the mirror and walk to the chair across the room. My eyes are now glued to the door, waiting for the moment when he’ll walk in, drunk. I know what he’ll do. He’ll slur out insults, his breath filling the small room and making me gag. Then the beatings will start. A punch to my left cheek. A kick to the ribs. He will stop to drag me back to my feet. It’s been six months, so a break is in my future. I’ll scream and he’ll stuff gauze in my mouth, the same gauze that I’ll have to clean myself up with. Then, he’ll pull out his knife and start carving me up. A knick to the ankle, causing indescribable pain. He will grab my wrist and start slicing, blood will pour out and I’ll become dizzy. Taking his chance, he’ll throw me against the wall and choke me. Then the world will turn black.

Angry tears stream down my face. I knew what I was to him. No longer his daughter, only his captive. When I search through my memories, the old him his no longer there. The old him disappeared when I was five. When he disappeared, I became happy and slowly began to forget him. Eight years later, he’d showed up. I’d seen him in the supermarket and then he’d took me. I had only been thirteen. That was two years ago.

Lights pierce through the blinds. He was home. Mentally, I put up walls. Shutting down any vulnerable emotions. The lights shut off and heavy footsteps fall on the porch. Keys jingle and the front door opens.

“There you are, sitting there like a retard,” he laughs. He’s the one that is unintelligent I remind myself. The insults continue. Always the same ones.

I stare at him, waiting till he pulls his fist back. After ten minutes, he does. His fist hits my left cheek. Heat blossoms and pain follows it. His foot rears back and kicks me, sending the chair flying backwards. He grabs my hair and pulls me up. I grasp my side, knowing that a few ribs have finally broke. The pain is excruciating. Then he grabs my arm. Slowly he bends it, unwanted tears leak out of my eyes. Then it snaps. On cue, I scream. He grabs gauze from his duster pocket and stuffs it in my mouth, silencing me. The knife comes out.

‘It needs to end!” the voice repeats itself.

I grab the knife out of his hand and shove it into his stomach. He grunts and falls to the floor, holding his stomach. I gasp and shuffle backwards. Blood coats my hands, like a glove. I did it….. I really did. Without so much as a backwards glance, I run. 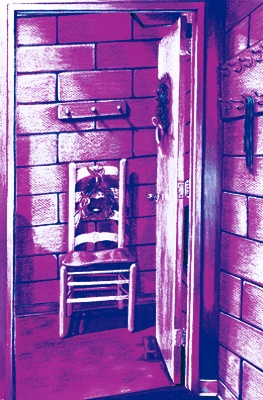 The author's comments:
A few weeks ago, I had around 5 nightmares in a role. So to try and beat them, I wrote a story about one of the ones that freaked me out the most. Luckily, it did.
Post a comment
Submit your own

View profile
Thanks! But, as it said in my comments of the piece, it was a nightmare. And, usually, my nightmares last a long time, but ths one didn't last as long as the others. Therefore, meaning that I guess that is up to the mind of reader to answer your questions.
Silogram GOLD said...
on Jun. 8 2013 at 9:38 am
Silogram GOLD, Radnor, Pennsylvania
11 articles 0 photos 11 comments
View profile
Wow!! Really powerful, my mouth was gaping as I read it. Very well written. Nonetheless, I can't help but think that it needs more of a purpose--why did the dad leave, and why did he come back? What did the daughter do in the meantime? Does she have any other dreams and aspirations besides being free from the dad?
BookNerd35 GOLD said...
on Jun. 7 2013 at 11:22 pm
BookNerd35 GOLD, Herod, Illinois
10 articles 1 photo 60 comments

View profile
Great job!! I think that all of your stuff is great but this one is in my top three! KEEP WRITING PLEASE!!!