It’s been like this for a while now. I want to say that I understand what is going on with her, but no matter how hard I try; I just don’t. I know why she is like this but, it doesn’t me I understand. Her therapist says that this is what depression does to someone. That there will be times where everything gets so dark and lonely that she can’t seem to pull herself out of it. Days where it gets so bad that she disappears right before my very eyes. Dad says that she’s depressed but, she’ll get better soon. Grandma says she’s just throwing a pity party for herself and needs to get over it. I don’t care what it is, I just miss her.

No matter how hard I try to understand what is happening, no matter how many times I try to talk to her, nothing happens. She just sits there, staring out into nothing, not paying attention to anything. I miss who she was more than anything in this world but at the same time, I couldn’t really remember who she used to be. For the past few years, this was all I had known. I had grown used to seeing my mom like this. They say that this is what happens when a mother grieves the loss of a child; that she will shut down for a while before she picks right back up and does what moms do. But so far, it’s been three years and she hasn’t picked right back up.
Sometimes, I want to scream at her. Shake her until she realizes that she still has a kid, right here. Right now. But, Dad says not to upset her. To leave her be and one day, one day she’ll remember that she still has me. I keep wait for that day, but at the same time, I’m dreading it. I don’t know what I’ll say to her when she comes out of this. If she comes out of this. Part of me misses my mom more than anything in the world and I long for the days where she’ll hold me in her arms and call me her special little girl, the day where she’ll give me the best hug I’ve ever had and tell me she loves me. Another part of me is so angry with her. And I am. I’m so ridiculously angry with her and I can’t possibly understand how she could do this to me. Maybe that’s selfish but I’m at the point where I no longer care. She may have lost one daughter, but I was still here. I was here, and she was missing that. It felt like when my sister left, that my mom did too, and I didn’t know how to bring her back.

Dad grieved for a while, he was sad and would cry in the bathroom when he thought no one could hear him. But the walls in this house are thin and I can hear it all. It took him a few months, it took me a few months longer, but we accepted it. We started to move forward and keep going. She’d have wanted that. Mom, though, she froze. She stayed in her chair and stared.
She wasted her cigarettes, ignored her daughter and she wallowed in this state of sadness that none of us could ever get her out of. And I grieved again.

Depression is a cancer. It will start off small. So small that you may not even notice it’s there for a while. It’ll be the small part of you that makes you stop laughing at a joke. That soon turns into you pulling yourself away from your friends. The cancer will grow so large that you will cut everyone off until you’re alone with just you and your cancer. That’s what happened to mom.

After my sister left, she tried to cover it up for a little bit. Tried to act like it didn’t bother her anymore. But I knew. When she stopped going out, when she stopped cooking dinner every night and just got take out—something we have never done in my house—I started to put it together. Dad says she’s getting better now, but I can’t see it. All I see when I look at her is cancer. Her body is riddled with it. With cancer, if you don’t try to stop it early on, it can sometimes be too late.

So, I take the cigarette from her fingers and I put it out. I shut the window and drape a blanket over her legs and I set the cat on her lap. I make sure she’s comfortable and I wait for the day that either the cancer disappears, or she does. 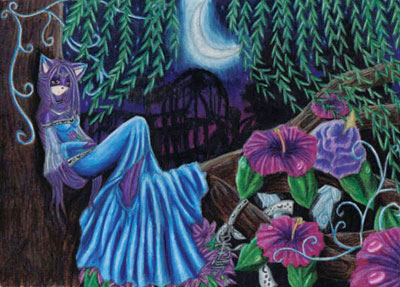 This piece was inspired by my own experiences watching someone I love suffering with depression.