At nightfall, all are silently devoured into nothingness. A faded radiance of twilight merges into a dampening swarm of black and gray, yet a wreath of fog lingers and permeates into dreams.

Hiding by the back door of the meeting room, her gaze focused on the scrapes of paint and sand at the foot of the bleached hallway walls. She pictured her old acquaintances, with shuffling feet and torpid steps, hurrying along in numb queues.

She turned and peeked through the curtain, behind which, inside the meeting room, stood a woman, whose words were suffused with a forgotten familiarity, possibly uttered long ago.

She closed her eyes and with sorrow piling to her throat in a suffocating manner, the tips of her fingers turned senseless from dread as she loosened her grip.

Her acquaintance with her was the closest she had been to her in her lifetime. She could almost feel the listlessness of a summer night, a damp layer of sweat stuck to her elbows, and a silent humming of cicadas on willow trees by the meeting room. As the crowd closed in, she saw a thin strip of willow branch, folded into a loop, and he was aiming for her. In the corner she stared in fear, a helpless being shivering at the foot of the hallway walls, and the loop went. In suffocation, the world began to spin in black and colored mosaics, and she felt life slowing draining away from her.

And then, in her semi-unconsciousness, she heard the steps of a person, splitting the crowd, rushing in, tearing away the willow branch, taking her hand in hers, and dragging her away.

Paralyzed from shock, she clung lifelessly onto her, and for a moment her feet were off the ground, her entire volition secured under the brazen light of street lamps.

“Get away from here.”

Her frantic cries back then were injected with gentleness as she relived that scene over and over again after that night. Clinging on to her with her feet off the ground, she was an astronaut escaping gravity, a bird escaping its cage. The deepest impression was her eyes: when she regained her consciousness and looked up, she saw a reflection of the street lamps in her eyes, a spark containing all hues of the sun with unsullied clarity and a soothsayer’s peace, a spark with romance as the starry night and gentility as the winter moon.

Night was beginning to fall, and the session in the meeting room was over. As the people poured out, she hid among the escaping crowd, and disguised as a fellow attending member, she struggled to her side.

Of course, she did not recognize her, but she preferred it that way.

Under the humming murmurs of the crowd, she began to speak, in a voice which she herself could barely make out.

“There is so much on my mind, and I must speak quickly, since we only have several minutes together, and then we must depart again.

“A year ago, you told me that the world outside would be a better place. You told me that escaping would make it all better. I did as you said, and life did get better. Yet every evening when I look upon the stars but could not find any in the glamour of city nights, I realized that willow branches never wither. An imprisoned fledgling, plucking at the metal locks with a thin beak—not even as the bars of the cage were soaked in its own blood would it see the dim possibility of a true escape. Haunted by the constant gnawing, its life depends solely on the angel and memory of that night, when she boosted its wings in her palms and set it free for the first time in its life.

“I loved my cage, my angel, I love my cage. Draped in ignorance and imprisoned in fear, I neglected everything in the presence of you. I need not the glamour of city lights nor a new life. I need only you, and your embrace. I need only your trust, and a sense of true security, when I need not explain myself and my actions to prove my innocence since all would be protected under the brazen street lamps, and in the spark of your eyes.

“But I know it’s impossible, and all I could do in gratitude is to pray and convince the gods that you deserve an angel’s life, and night after night I plead that you would never die. In the evening dew, you left and I attempted to grasp every curl in your hair, yet my savior faded in shadow. As the dream ended I awoke to face, once again, the glamour of city lights—memory is medicine yet not a cure. My angel is my cure.

“I see your ride yonder. Now you must leave.

“Next year. Three hundred and sixty-five days later. I shall see you again.”

And so, in the dimmed street lamps, beyond the colors of fantasy or the swarms of black and gray, she turned away. 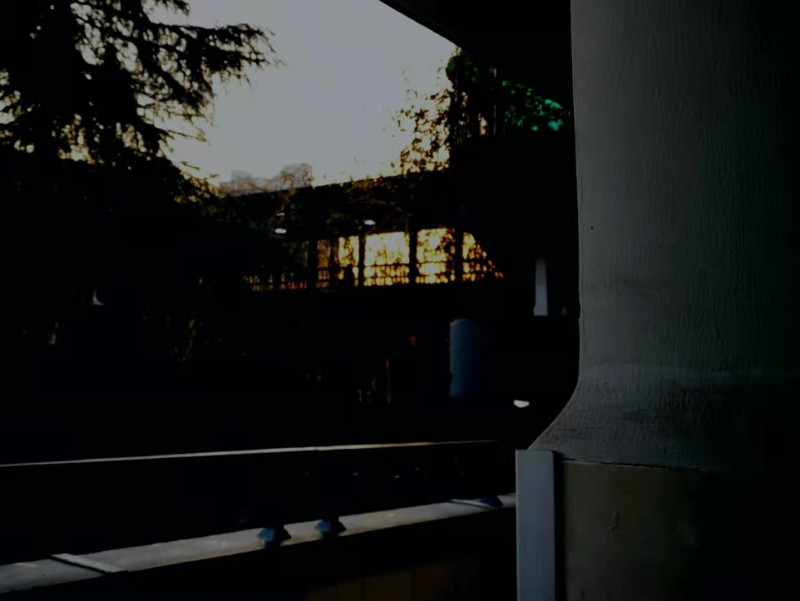