“Well, I’m not a fan of the beach-boy look. I don’t like blond guys too much, nor the blue-eyed look. Tan is ok, but not a heavy tan. I’m not into the whole cigarette smoke smell type of thing – I’m more into the clean smell. A huge amount of swearing is a no-no. I’m not into the punk-rock edgy look, or the emo and angsty look.” I thought for bit, rolling onto my back and letting my leg dangle over the side of the pink and brown clad bed. My friends surrounded me, hanging on my every word, calculating and analyzing every letter. “I like the relaxed look. The look where he knows he looks cool and he doesn’t care. Someone who isn’t full of himself. Someone sweet and caring, but at the same time has a lot of fight in him. Strong, physically and emotionally. Someone who can listen to me ramble.” They shared looks, I could feel it, but I reused to look over and see if they approved. “Someone mature. Someone who will really love me back.”

“Sounds like Derek,” Jayne commented. I sat up abruptly, making a face.

“No thank you!” I exclaimed, and threw a pillow at her. Derek was a guy who would rather go out with his phone than with any girl. She giggled and threw a Twix bar, which I caught and proceeded to strip of its wrapper. Just as I was putting it into my mouth, Caroline added,

“Oh, comf off ith!” I mumbled through my mouthful of Twix. Everyone was laughing now. Aaron was a total jock, and who, it was rumored, had kissed every girl in the senior class. I swallowed, shaking my head, laughing a little too. But it was half-hearted.

“What about Jason?” Hayley wondered, tapping her chin comically. At that, we all scrunched up our noses and let out similar cries of disgust. Jason was one of those people who must have been scraped off the bottom of the gene pool.

We were having complete giggle fits now.

I wiped tears from my eyes, gasping for breath. I looked at each of my friend in turn, watching them slap the bed and laugh and giggle. I smiled, but inside I wished they could be as serious I had been when I told them my dream guy. Not even Sara, who was usually our goody-two shoes of the group, could keep a straight face. At the moment, she was rolling on the floor, her cheeks red and her eyes bright.

I leaned back against my elbows, letting out small ghosts of laughs.

Katy sat up a bit and, after taking a few deep breaths, held up a finger for silence.


They let out jeers and cat calls, some making faces and sticking their tongues out. I, however, was frozen. They were overcome with their incredulity at such a match, and so they could not see that the blush creeping up my neck, bleeding across my face.

Kit (as he liked to call himself) was a transfer student from England. He sat in the back of my Art class, quiet and studious. I never saw what he drew or painted in class, but last week I had found a piece of folded sketch book paper in my backpack. It was a perfect portrait of me, chatting with my friend Daisy during class. He even had the dimple just right. Some of the girls were in awe with him, the tall, dark stranger. The first time I saw him, the only thing I noticed was his black leather jacket. I had a thing for leather jackets. I noticed how I started listening in on conversations whenever they mentioned his name. I began studying the way his hair, dark ringlets, fell into his black eyes as he drew. He had a slightly crooked nose, and some people said he had a violent history back in London. He had long fingers, smudged with charcoal most of the time – they didn’t look right without a speck of paint or the taint of graphite or charcoal. I knew he hung out with a couple of kids during lunch that weren’t the best of people, but I also knew that he usually spent his time with them studying. I kept the picture of me under my pillow, looking at it in wonder every night before I fell asleep. My heart started beating a little faster whenever I thought about him, and I won’t even go into what it’s like seeing him every day in class. I wondered if he knew that I was really a studious girl, that I preferred my time with a good book instead of texting my friends. That I actually liked rock instead of pop music. That I had straight As in my classes for a reason. That I spent my Sunday mornings surfing, if the waves were good. I wondered if he felt the same way, and if he knew what it did to my heart when I caught him flirting with other girls but sneaking looks in my direction. I wondered what was on that other sheet of paper that I found in my backpack last Friday…

“Hey, Cassie, why the long face, girl?” Laura asked, chucking a pillow at my head. I shook my head, my light brown hair tickling my nose, and forced a smile.

“Oh, nothin’. Just remembered I have volleyball practice tomorrow, is all.”

They nodded in sympathy, and then moved on to interrogating Daisy about what guy she liked (I was the only one who knew that she was actually lesbian and was crushing on Caroline). Though I felt bad for her, and should have stayed and tried to move their attention onto Hayley or anybody else, I had to get out of there. I made a beeline for the bathroom, knowing that they wouldn’t know or care.

I grabbed my duffel bag before I shut myself in the sanctuary. I rummaged around in it as I leaned up against the door until I found that little worn sheet of paper. I unfolded it, sliding down onto the floor. Then I found the other folded square, the one that I had never had the chance to look at. I set the first one on the floor beside me, and unopened it with shaking fingers.

It was a picture of him. He had done every detail perfectly, every detail that I knew so well. He was smiling up at me, those dark eyes so warm. My heart reached out through my fingers, tracing every line, wishing it was the real thing.

It was then that I noticed the scrawl on the bottom of the page. It was a series of numbers and two words:

I fumbled for my phone, looking at the time on its screen. Its only eleven thirty p.m. Surely he should still be up…?

I dialed the number, and waited, pressing the phone to my ear.

I nodded, then whispered, “Yeah, I liked them.”

“I thought you might.” I swear I could hear the smile in his voice. “You doing anything tomorrow?”

“Just volleyball. I have practice.”

“How about after we get something to eat?” I loved his soft English accent.

“Oh and Cassie?” I loved the way he said my name.

There was a pause, and I could feel his smile through the phone.

“If I were with you, I would kiss you right now. As it is, I think it would be weird if I kissed the phone.”

I laughed. Meanwhile, I heard my friends pleading with Daisy, trying to get them to tell her who she liked. I bit my lip.

“Looking forward to it, luv. See ya.”

The phone went dead. I took a moment to caress his picture one last time, then folded it along with the picture of me and put them back into the duffel bag with my phone. I slipped out of the bathroom, setting my bag aside, and got my friends’ attention away from Daisy.

“Hey guys, there’s something I think you need to know…” 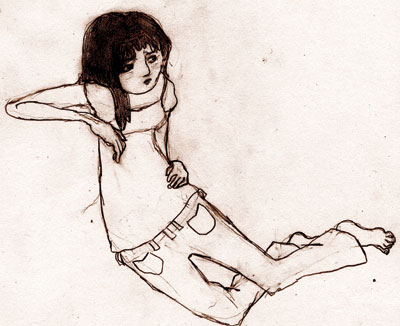 View profile
ok I just sumbitted 'On My Way to Believing'. it is pending approval. I hope u like it!
KiraKira PLATINUM said...
on Jan. 25 2011 at 11:17 pm
KiraKira PLATINUM, Cardiff By The Sea, California
35 articles 0 photos 217 comments

View profile
of course! it sounds like a good idea so I'll get started on it right away! I'll post it as soon as I can! And thanks for commenting and being so supportive. It means alot :DD
the-ampersand PLATINUM said...
on Jan. 25 2011 at 8:49 pm
the-ampersand PLATINUM, Ogdensbury, New York
32 articles 1 photo 106 comments
View profile
REALLY??? *fan girl squeal* *dance* awesome!!! yeah, you know, just a little v-day romance. like a pessimistic girl who is totally over vday and *poof* turns out it's not so bad after all!! *cute guy magically appears* YESH!!!
KiraKira PLATINUM said...
on Jan. 25 2011 at 8:20 pm
KiraKira PLATINUM, Cardiff By The Sea, California
35 articles 0 photos 217 comments