The Angel Chapter 2: The unexpected returns

Prologue: This chapter reveals the most drama in the story so far.
Guess who makes the comeback and who got the gun to the head.
But is their history between Serena and him? Just keep
reading the story to find out.

It was still cold out but it was getting closer to dawn when the sky started to get warmer
. I had to get Adam to Denali' for he can restore his health. He decided to go on his own. I saw a ghostly light tinted red. I realized it was him. Not Adam, but it was him. It was Trevor.
I turned away to run but he caught up and tackled me to the ground. "Let go! Trevor, let me go now!" I screamed as loud as I could. He held his grip on m wrist as I tried to get away.
The guardian angel appeared and he let go. "I...I thought you were dead?" Trevor said to my angel. "No,... I had lots of power left. I just pretended so you could leave.", she said "Now, What do you want with Serena?". He took a long sigh.
"I wanted to tell her that I work for the master now and he told me to tell Serena that Adam got abducted by Xavier."he said sarcastically.

"Wait,....How are you working for the master?" I asked stunned.
"He gave me two choices. Because I thought angel was dead, I had a choice to be killed, or to work for him.
" He replied. The angel looked back at me and said to go with him and help Adam and that she'd be watching over me. "
OK, I'll go." I said

It was almost three in the morning, when we decide to take a break and nap. He slept behind a small bushel and I fell asleep along a log that must of just fell from the tree above. When we woke it was still early about nine when we started traveling back. " So, Where is Adam, since you said he had been abducted?" I asked curiously. "The last place anyone saw him was three miles from the homelands of the reservations. Are you upset about it?" He asked. "Not upset but......just stunned and a little bit worried." I replied.The rest of the walk we were silent because we both knew we didn't want to talk about anything since the fight with Adam,Angel, and of course him.

It was a warm day when we arrived at the building. We walked in and went to find Xavier and Adam. We found A room where some security guards were and there they were. Xavier was there threatening the guards and holding a pistol to Adam's head. I went to yell at him when Trevor grabbed me and put a hand over my mouth to stop them from shooting him. "Serena,... I know right now you're upset and scared, but if you keep yelling......... they are going to kill Adam. OK?" he said calmly.


I promised Trevor that I'd be quiet.
We went slowly into the room and sneaked up behind the guards back.
Trevor went out of hiding and tried to calm down Xavier from shooting Adam in the head.


"Xavier, just listen to me this once. Just slowly put down the gun." Trevor said.
"Trevor, why should I?, give me one good reason." He said sarcastically. Trevor glanced at me while
I was still hiding behind the guard."Fine. For all I know, Serena would be upset."
he said convincing him to put the gun down. I walked and stood in the back of Trevor.
"Serena....." he said surprised. He dropped the gun and let go of Adam. I jumped out to catch
Adam from hitting the floor. "Adam, can you here me? Are you okay?" I said worried.
Xavier got mad and punched Trevor in the face. Then when you know it, there's another fight, now.

"What's your problem Xavier!" yelled Trevor. "My problem is you Trevor. You should be dead right now. Why is that you alive?" He said as he stopped fighting. "I work for the master now, and I was helping Serena find Adam since you abducted him you idiot." Trevor explained..
I got up with Adam as he was crabby at Xavier. I decided to get Adam out the room before he could start anymore trouble than there was already.
I didn't think Trevor or Xavier needed more company in their little argument. " Serena, just help me sit down on the bench, and you can go get that idiot out of there for we can head on home." he told me. I jogged back to the room two flights up and made it easy to get Trevor out of there and to come on. 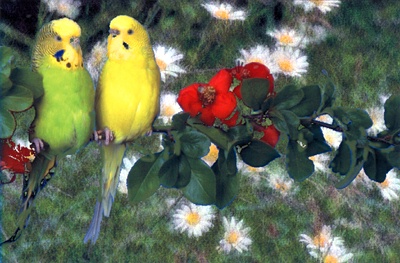 this is only the beginning!!!