Panting I leaned against a small tree, once I had caught my breath I reached in the hole of the tree and grabbed what I came for. It was small but still he had given it to me. I held the box in my palm before I opened it, feeling it's smooth top, I slowely lifted the velvet lid. Inside was a small necklace with four stars on it. I knew what this necklace meant it meant he was in one of the four stars, or one of the four provinces. He had left me this as a map a way to find him. I closed the lid, and shoved the box in my pocket.

I ran back home and hid the velvet box before running another mile. When I came to the local beach I kicked off my shoes and waded into the cold water. I wasn't suppose to do this it was against the code, but I felt like breaking the rules. With that thought I dove under the water feeling the cold water pierce my cheeks, when I came back up gasping for air I felt like screaming his name out loud. That was also against the rules, I guess I really felt like breaking the rules. I dove under again and came back up spluttering, once I had caught my breath I leaned back to float but before I could, I heard an earsplitting whistle. I turned, there walking towards me was a figure clad in drab colors, a code enforcer. They took care of all code breakers, that meant me. I began making my way to shore, dripping wet I stepped out of the beautiful water. The code enforcer sized me up "you do know that it's against the code to swim here?" He said a chill ran down my spine but it was not from the cold, I managed to draw myself up to my full height. "Yes" I say my green eyes meeting his dark blue one's. He pulled out a black citation pad and wrote down my citation. Once finished he handed me the citation page and walked away. This would cost me dearly, a citation always meant trouble. I grabbed my shoes and ran all the way home.

I stared in the mirror looking at the state of my red hair, and drab dress. How was I going to explain this? They would have to find out about the citation sometime, since they would have to help me get it fixed. Sighing, I pulled off my drab dress to change into something dryer. I browsed through my clothes finding only drab colored dresses and no pants everyone knew women wore dresses, and men wore pants. I hated that, but it was the code and everyone followed the code. I pulled out a drab dress and pulled it over my head, next I walked into the bathroom to dry my red hair, once finished I pryed a floor board up and took out the velvet box. I opened it up and took out the necklace with the four stars, looking at it more closely I saw that the stars each had a white crystal in the middle. You could wear jewelry but you could never wear anything that would draw attention away from you're natural beauty. Usually that was you're hair, but it could also be you're eye color. I could never wear this out, or in front of my parents, but no one was home so I took the necklace out of the velvet box and put it around my neck. It was beautiful too beautiful, where did he get it? Did he steal it? No he wasn't capable of that, but still where did he get it? Suddenly I heard the open of a door, I took the necklace from around my neck and shoved it back in the velvet box, I put the box back under the floor board. Then I went to greet my parents. 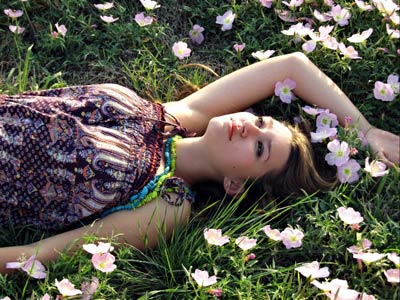 A sneak peek at a book I hope to write im the future! Enjoy!

View profile
Not really, haha! I just thought of it for this story.
LKQgirl GOLD said...
on Aug. 23 at 10:52 am
LKQgirl GOLD, Somonauk, Illinois
16 articles 15 photos 58 comments

View profile
I like the intriguing start of this story. I do a lot of wading in cold water; do you?