To the Beyond | Teen Ink

Ethan knew he was right. He had to be. His life depended on finding it.

On finding the Beyond.

Just thinking about that made him sick. Many people went in search of the Beyond, but none came back, the Government (being the liars they are) said they had carened over the edge, their bodies impaled by the rocks far below.

That’s why he was here, camping out near what once had been Louisville, but was now called Traders city. It was a place were Traders sold illegal items such as exotic furs, Chemicals, and poison. They even sold slaves from Pleters Edge. A place were people of bronze skin, and violet, as well as red eyes lived.

The people of Pleters were also rumored to have gone to The Beyond, and come back alive. That’s why he was here. He was literally traveling in freezing weather to find a place, that was probably a myth.

He knew it was a risk staying here for the night, but he couldn’t walk through the hail that had decided to rain down. The hail had started at what he thought was around ten, (he still didn’t know how to understand army time) and it hadn’t stopped since.

Ethan didn’t mind the snow, and hail, but he did tonight.

He was nearly to the Edge, the supposed “end of the line.” Literally. Because of the hail he had lost at least two hours of walking. And he would also have to walk through at least 18 inches of snow. (Give or take a few Inches.)

Ethan didn’t like the thought that he might have to walk through that. But he knew he would have too.

Whether he liked it or not.

Ethan grumbled, and looked around at his small tent.

The hail was beating against the white tent, occasionally creating holes that he had to fix with tape.

The tent was perfect for someone the size of a dwarf, but it wasn’t so good for a 6’5 foot eighteen year old caucasion male. It was so small that he had to curl into a ball, with his feet pulled up close to his chest, to sleep. He also had to duck his head when sitting.

And, despite his heavy coat, he was freezing. I mean sure he had a thin blanket, but tell me dear reader do you think you would be warm in minus fifteen degree weather?

Ethan looked down at his watch. He was almost certain that it was 12:20, but, as always, he wasn’t sure.

He laid his head back down and closed his eyes, hoping for sleep, luckily for him his brain decided to obey him.

As always, Ethan dreamt of The Beyond.

Supposedly it was a warm place, with sand, and sea, and the sun. They said that there was no such thing as snow there. And they also said that the sea was bluer than the sky.

Ethan knew he would like it there, if it wasn’t covered in snow, and ice, then that’s a place he wanted to be. He hated living in this snow-covered wasteland.

It was too white for him.

Ethan awoke with a jolt, his tent flap had been torn open from the wind, and he was covered in snow.

He sat up (Making sure to duck his head) and dusted the bright white flakes off of his thin blanket. Then he started to pack up.

It was easy since he had few belongings to fit in his duffel bag. All he had was his tent, a poetry book, even though he couldn’t read, much like the other citizens of New England. The reason behind this was that now everyone had tablets that read to them.

But, I mean why not? He had no other personal items. Except for an old photo of his brother, but Ethan didn’t like to think about that.

After he was finished packing up his belongings, he began to trudge onward.

He was barely been walking for five minutes when his boot came off. Ethan hated when the snow was so deep that his boots got stuck.

But hey what could you do? Yell at the snow?

He plunged his gloved hands into the snow and started feeling around for it. Finally he thought he found it. He pulled the boot upwards, and found that it was connected to something.

It was connected to a body.

Ethan was horrified by the face of a young girl, who looked eight or nine. Her arms were folded across her chest, and her skin was ice blue.

Ethan dropped the shoe, and stared at the young girl.

After a few minutes he looked up and saw a piece of paper fluttering in the wind.

You may be thinking that this was an ordinary occurrence, but this, dear reader, was rather odd in these times. The reason was that no one had use for paper, when they could just speak into their devices, and have an artificial intelligence jot it down for them.

Ethan reached out and grabbed the parchment, written down was;

May you rest in peace in the Lord's kingdom.

Ethan stared at the piece of paper, his heart beating rapidly as he noticed the claw marks on her chest, and arms.
Whatever had attacked her, was something he didn’t want to run into.

He piled the snow back over the girl, retrieved his shoe, and placed the paper back onto the makeshift grave.

He dug up a rock and placed it at the top of the piece of paper, so that it would not be claimed by the wind.

He then started walking again, his gray eyes were a mask of sorrow as the girls face swarm before his vision. No matter how hard Ethan tried he couldn’t seem to forget the claw marks on her chest.

He walked at least seven miles when he saw it.

A beast with large white fur, black eyes, and yellow teeth. He racked his brain, as the beast regarded him, for it’s given name. But the information refused to reveal itself.

The beast let out a low growl, and stepped towards him. When the beast moved Ethan finally saw it.

He had made it. The only problem was that the Beyond was being blocked by the white animal. And that animal had finally decided that he wanted to try out Ethan.

He had no time to react as the beat lunged. With one swift motion Ethan had deep gashes in his chest.

Only then did he remember what the animal was called.

It was a Polar Bear. A beast that roamed in only freezing cold temperatures.

Ethan drew in a breath, his face turned to the Beyond, when the bear struck again.

Ethan knew what was coming, but the pain still overwhelmed him as he took a shuddering last breath. His brothers face appeared, his grin wider than ever.

Ethan took another shaky breath, his body sinking into the snow.

He knew what was coming.

The snow covered him, as the bear began to pace, looking for its prey. But thanks to the snow, Ethan was fully hidden.

He knew he would probably be smothered. But he knew it was better than being eaten by a Polar Bear.

Ethan was just starting to suffocate when a loud gunshot rang through the air. The bear let out a loud growl, and another shot was fired.

Ethan heard a thump, the bear was dead.

He listened intently, gasping for breath.

The illegal hunters had taken the dead Polar bear.

He lifted his head from beneath the snow, and took a deep breath.

The air felt amazing on his cheeks.

He had never been happier to see the white wasteland.

He touched his chest, blood was on his hand when he took it away.

He knew he didn’t have long, so he began dragging himself toward the little green tree that signaled that he was about to cross the line.

The pain was unbearable to Ethan, but he kept crawling.

He noticed that the snow was starting to thin out, he was so close. He kept moving his breaths becoming ragged.

And then he crossed the Edge.

The warm sun greeted him, as did the sandy beach. He turned over looking up at the deep blue sky. He smiled.

He had made it, and now… 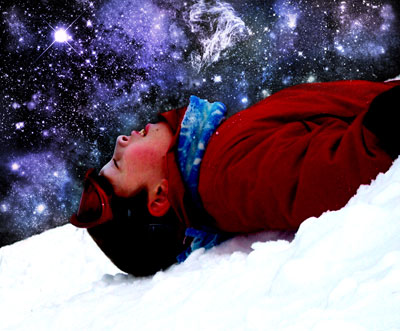