Kai ducked down lower behind the boulder as her father's soldiers passed. She was submerged in water that came up to her chest. She had jumped in when she first heard them, and their horses.

She was hiding from them because she was not supposed to be out here, she was actually supposed to be in her room practicing her embroidery, but she needed something. Something important, and she had come to retrieve it.

She peeked out from behind the rock, it was risky to do, but she still had to, to know if they saw her.

A soldier turned his head, facing her rock. She turned her face away, and for a horrifying moment the soldiers were quiet, but then they began laughing again.

Kai let out a breath, and shivered. It was freezing in the water as she listened intently to their laughter, and friendly banter. They came to a fork in the road, and stopped, then they began talking about Monatech and it’s many beauties.

Kai loved her city as well and on a different occasion would have jumped from behind the rock, and told them more of the city, especially the palace. But today she would hide from them, for if they saw her, they would surely tell her father, the king of Monatech. And if they did, she would be constantly watched by the soldiers.

A soldier with blond hair began telling a story of how he tamed a wild horse from the mountains of Galtrate, then they took a left away from her, and towards the city. To be safe she waited a few more minutes, a few more agonizing minutes in this freezing water.

After a while she was sure they were far off, for she could not hear their laughter, and loud voices. She raised her violet eyes and looked up at the darkening sky.

It was nearly winter, and soon the whole river would be covered by ice and snow.

She had to return to her home.

She looked around, searching for the place she had hidden her treasure. She stepped up to an old hollow tree and reached inside. She felt her bow and pulled it out, along with her arrows in their quiver. It had been hard to whittle the arrows, and soften the leather to create the quiver. But she had done it.

She smiled down at the intricately designed bow.

The bow had not been her own creation, instead it had been given to her by an employer, who despite Kai’s status, had asked Kai to retrieve something that had been stolen. The object was a simple necklace with a strange symbol on it, Kai hadn’t thought it important but she was determined to earn the bow.

The woman had been quite pleased with Kai’s discretion when she stole it back, and had rewarded her with the beautiful bow.

The truth was that she had not stolen it back, instead she had simply asked for it, and immediately it had been handed to her.

For that was how high the royal family was held.

It had been made from the wood from the oldest tree, and had been glossed over, and covered in symbolic designs. It was one of the most beautiful things Kai owned, and she intended to keep it safe. Over the years she had created her own designs, simple swirls, and flowers, sometimes an occasional word.

She had made the bow her own, and just like Kai, it was special.

Kai put the quiver on, and then pulled the bow around her head.

She focused her mind on getting back to the palace, then trudged down the road to the right, away from town, but towards the palace.

The reason the palace was set away from the city, was because her father enjoyed the quiet of the woods. And he wished his children to be raised to respect the beauty of the world.

She ducked her head, pulling the hood of her brown cloak further over her head to shield herself from the high windows of the palace.

She hurried over to where the window to her room was, and began climbing.

A few minutes of climbing and Kai finally climbed into her room. She leaned against the wall, resting her exhausted arms, and legs. Then she pulled off her sopping wet clothes, and pulled on a red dress, with black lace.

She was just about to hide her clothes when there was a knock on the door. Kai’s sister opened the door, and stood in the doorway. When she caught sight of Kai’s wet hair, and clothes, she frowned.

“You were out again weren't you”

Kai stood their, staring at Gem.

Gem shook her head, crossed the threshold, and closed the door behind her.

“If I were you”  She said “I would have come back an hour before someone was supposed to come and check on my work. Then I would have hid the wet clothes, dried my hair, and hidden the weapon. You should also try to disguise yourself better, I mean have you seen your eye’s? Their rather noticeable. ”

Kai sighed as Gem looked pointedly at Kai’s bow and arrows in the corner. Then at her wet clothes.

“Why are you wet anyway? And where did you get those hideous trousers?”

Kai was about to answer, but then Gem shook her head.

Kai walked to a chair by the fire and sat. She was surprised at how quickly Gem had assessed the situation, and was now trying to help Kai.

Gem took a brush and began combing her hair.

“You know maybe from now on you should take the servant stairs, just so you don’t get caught.”

Kai nodded remembering the time She had been caught training with a guard to learn to fight. She had been confined to her room for three weeks, and she had been unable to speak to any of the guards or servants, save the young girl who brought her food. From then on she was only aloud to talk to Gem, Cade her brother, and his wife Lined.

Kai sat as still as she could as Gem combed, and braided her hair. While she did this, Gem hummed Kai’s favorite song.

“Why did you not leave the weapon in the Hollow tree?”

Kai smiled at her sisters ability to know where Kai was, and where she hid her treasures.

“It was obvious, And I could not risk it Gem.”

“I understand.” She stopped braiding Kai’s hair, and began to work furiously at a knot.

“I once had a dagger, given to me by our Grandfather. I don’t think you remember him, I believe you were seven when he died. Anyway, I had hidden the dagger near the servants stairs one night, and the next day it was gone.”

Gem sighed, as she finally untangled the knot in Kai’s hair.

“Did you ever find it?” Kai asked.

Gem shook her head, and tied Kai’s hair with a black ribbon. Kai stood and faced her sister.

Gem nodded and turned to leave, but Kai caught her arm.

“You won't tell Mother, or father will you?”

“You are entitled to your secrets Kai. But remember, you must be more careful.”

“And Kai, I cannot tell you what to do, but please don’t leave the palace without a guard. Or at least a servant. Do you understand?”

“Fine.”Kai said “I promise” But, as always, her fingers were crossed behind her back.

“Good.”  Gem said, and then she left her room, her green dress billowing behind her.

Kai stood there a moment, staring at the door, then she pulled up a floor board and hid her bow, quiver, and arrows. Then she hung her wet trousers, and shirt, near the fire

Then satisfied, Kai sat back down and pulled out her embroidery, the stitches were all uneven, and sloppy, but she needed something to present to her mother. Even if it was a lopsided, deformed bird.

She shook her head, hating how she had to cover up her outing, by pretending to be a proper young lady. She also hated how much her mother expected from her.

She pulled one stitch through, and sighed.

This was her life.

Sewing, prepping, beautifying, and looking for a suitor.

Yes, this was her life.

And she hated it. 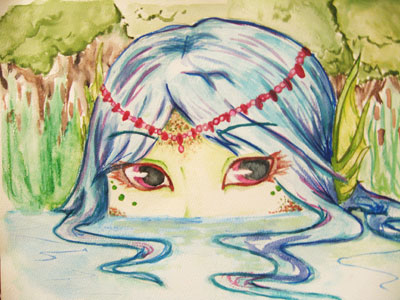