It was raining that day; huge droplets that tapped the window and streamed down. If only I could be on the other side, instead of in here.
That window seemed to be barred and chained, offering no escape, but my mind slipped through the cracks and suddenly I was outside. The rain was trickling on the top of my head and my clothes became heavier.
The ground feet rested on was blanketed with a layer of water. I took off my shoes and let it run between my toes.

Then I began to dance. Arms flailing as I spun around to a melody no one else could hear. I spun and jumped until satisfied I collapsed into a heap in a puddle. Soaked to the bone and blissfully happy, I watched the rain begin to fade.
I once again heard the trickling on the other side of the window and the monotone drone of the woman up front. Smiling now, but still ever so bored, I laid my head down and watched the waterfall on the locked window. 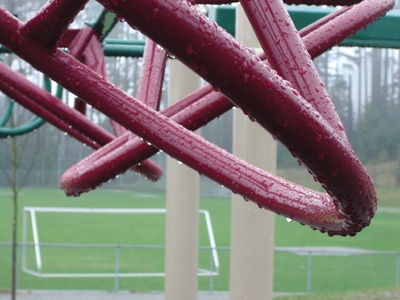