Leeya Rose was a normal teenage girl with a normal family consisting of a mother, grandfather, two sisters, and father who was on rather extensive hiatus. There was nothing exceptionally remarkable about her; she earned decent grades, donned decent looks, had decent friends, and lived in a decent house. The one thing about her that wasn't decent was perhaps her hair, it refused to conform. But that is not germane to her story. What is germane, however, was what had happened on her 18th birthday that turned her from ordinary to extraordinary. It all started with a worn, archaic bracelet.

'Leeya, you have a package' my mother said as she knocked on my door. The bright light from the hallway shown in my eyes as she opened my bedroom door. Her face peeked into the room- high cheekbones, copper skin, almond eyes and all. 'Is it from the reservation?' I asked giddily, excited about my upcoming peregrination to the Chippewa Reservation that my family had planned for my birthday after plenty of my pestering and whining. My great-grandmother was Chippewa Indian, on my mother's side. Traces of her could be found in all of us. 'No, it looks kind of old, actually' she said as she gazed down at the brown package in her hand. I could see what she meant, It was wrapped with parchment paper and wool strings- from the short distance, I could make out my name scrawled across the top in black ink.

Wordlessly, I reached out for the package. My mother handed it to me gently; it was almost as small as a ring box. 'Where did it come from?' I asked skeptically, while newsflashes of Anthrax ridden teenager popped through my head. 'There was no UPS or FEDEX notices, so I think someone just dropped it off earlier this morning. Maybe it's for your birthday, it could be from your father' she said. I snorted. 'Right, because he would really drive way over here just to drop off some badly wrapped'whatever this is' I scoffed as I shook the box next to my ear gently. I loved mom, but she was na've. Sure, my father did have a proclivity for randomly sending gifts, usually things like birthday cards two weeks after said birthday or children's books for Christmas because the basic thing he knew about me was that I read more than the average teenager- never mind that the books tended to be inadequate for my age group. So I understood where mom was coming from, but she failed to realize that his gifts were usually accompanied by a US Postal Code.

Sick of contemplating the package, I finally just ripped it open. The moment was dreadfully anticlimactic. I don't know what I expected it to be, but it sure wasn't a worn, archaic, tweed bracelet. It was distinctively Native-American and bohemian, my specific style- with five multi-colored stones that depicted a raven, wolf, snake, salmon, and bear. Nothing about it particularly captivated me, just the fact that it eerily matched the outfit I had planned to wear to the reservation. I shrugged and put it in my jewelry box. 'Well, that was nice of whoever gave you that'', my mother said, losing interest quicker than I had. She was absent from my doorway a few seconds later. I sighed as I stared at the clothes on my bed and began packing- quickly letting the mysterious bracelet drift to the back of my mind.

It was three days later when the bracelet was resurfaced from my jewelry box to my wrist. As I absently put it on, my friend Clara stared down at it as Alexis put our things in her car. We were road tripping to the reservation in Alexis's father truck. 'Where did you get that from? It looks old' she said, her ebony skin shown in the blazing sun. 'It just came a few days ago, we don't know who sent it,' I explained. Clara smirked. 'Sure, Leeya. It just 'came,'' she said sarcastically, causing Alexis to snicker from the back. I rolled my eyes and got into the truck. One thought popped up unremittingly in my head: This was going to be a long trip.

Surprisingly, I had fun getting to the reservation. Sure there were a few IPOD moments, when Alexis or Clara attempted to sing or started bickering, but that was expected. Our discussions were mundane at best, but still enthralling. But by the time we reached our destination, all three of us were worn. So, the jovial escort who welcomed us didn't assuage any of our cranky moods. 'Welcome to the Saginaw Chippewa Indian tribe. I am Robert, your guide' he said happily. We all plastered affable smiles on our faces as he led us to various places. Finally he directed us to the Soaring Eagle resort to settle down. We were going to be here for three days and we had much to see.

I found myself alone on my birthday meeting the elders of Mt. Pleasant, the next day. Alexis and Clara had ditched me for the luxurious pool at the hotel. I nervously shook each one's hand until I reached a woman at the end, who looked to be the oldest. Instead of shaking my hand however, she grabbed it and stared down at my wrist with a mixture of awe and speculation. 'Where did you get this, child?' she asked sternly. 'In the mail,'I stuttered. She looked up at me shocked, and then said something in Ojibwa to the others. They began having a full blown conversation, while shooting me skeptical looks. I got the paranoid feeling that they were insulting me. It was the same feeling of getting one's nails done while the Chinese technicians laughed and prattled in their foreign language. Finally, one of them decided to speak English. 'Who in your family was of this tribe?' a tall, wise looking man asked me. I got the distinct impression that he was the unofficial chief.

'My great grandmother, Helen Penn' I answered nervously. They began arguing in their language again. I don't know if it was just me being paranoid, but I caught one of the surlier women saying 'take it from her'' Frowning, I cleared my throat. 'Would any of you like to explain what it is going on?' I asked, mustering up whatever speck of courage I had. Four pairs of dark eyes fell upon me. Finally, the oldest woman answered. 'That bracelet has been lost for a long time. Your great-grandmother took it from us. It contains 5 very important stones, our stones.' She explained. I frowned down at the unimportant looking bracelet.

'Well, if you want it so badly, you can take it,' I said while starting to unfasten it. Three of them shouted in protest. 'If she doesn't want the power, I can bestow it on Alyson' the surly woman said. 'We all know that it is against the prophecy. The spirits want her to have it, not your Alyson' the chief said to her. I felt like that was my cue to go. 'Um, as nice as this has been'I think I should go' I said while backing up slowly. The eldest woman grabbed my arm again. 'You have great power in your hands, if you choose to use it. Those symbols indicate shape-shifting. They were each a part of us; we had agreed to tie them together. I contributed the Raven' she explained. 'And I the bear' the chief added. 'I was the salmon' said a woman who had been quiet the entire time. 'And I the snake' the surly woman said. That came as no surprise to me. 'Let me guess and my great-grandmother was the wolf.' I finished for them. I was literally a second from bursting out in laughter.

They all nodded. 'You may think it is joke. But later on is the full moon and it will activate' the chief said. Without another word, they all walked away from me. I snorted, and headed back towards the hotel to tell Alexis and Clara of the bizarre encounter.

Later on that night, I turned restlessly in my sleep- overcome with dreams of wolves, ravens, and bears. Finally, I leapt out of the comfortable bed to take a walk. I needed fresh air. When I arrived outside the hotel, I was little peeved that it actually was a full moon, but anyone can look at a calendar for the lunar cycle. Snorting, I gazed down at the bracelet on my arm. They said my great-grandmother had been a wolf. Hesitantly, I pushed down on the small carving of the wolf. For a few seconds nothing changed and I laughed at my stupidity. Then, I noticed the tingling in my legs. I looked down to find hair growing out of them rapidly, as they changed shape. Unable to scream, I tried to rip off the bracelet in a panic. It would not budge.

Next thing I knew, my peripheral view had changed, and everything was much clearer. I could see everything in the dark. I also could hear people approaching before I saw them. I stared up into the faces of the four elders, who looked smugly down at me. 'You must use these powers for good. To help the world and Mother earth. Make the vow now, or you will be stuck this way. Forever a wolf' the chief demanded. I nodded my head, and made the vow silently, and felt my form begin to change back into a human.

'You can morph at will now. And you must come whenever we call for your help. You are the beholder of the bracelet' I nodded as the three of them smiled at me proudly, but noticed when one did not. Her eyes glinted mischievously as mine narrowed; the threat was blazoned across her face. There will be trouble' 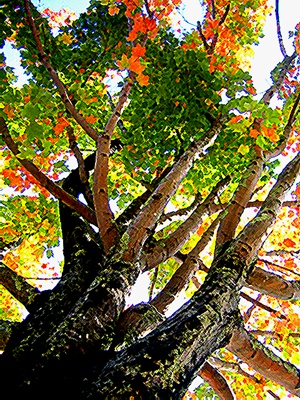 The author's comments:
This started out as an essay assignment in my AP English class, 'write a story that casts you as a superhero'. So the narrator is actually me, the background of the character is me, but the superhero thing never happened.
Post a comment
Submit your own