Favorite Quote:
"Oft hope is born when all is forlorn." --J.R.R. Tolkien

“Where are you?” Anna called in a sing-song voice, straining her ears. The faint sounds of muffled giggling sounded out, followed by a hurried “shhh!”

Anna’s lips curled up at the corners. She now had a good idea of where her two children were hiding, but she kept up the act, making a show of opening closet doors and cabinets and shutting them again loudly so that Liz and John could hear her efforts. The giggling intensified until she could pinpoint exactly where it was coming from — the basement.

“Now, where on earth could those two be,” Anna pondered aloud, descending the creaking steps into the drafty cellar. “I’ve already checked everywhere, but I can’t see any sign of them at all!” More childish giggling erupted from deeper within the basement. Anna grinned again. “It’s like they’ve disappeared completely!” There was a short burst of loud laughter, and Liz’s voice hissed, “Shut up! Do you want to be caught or what?”

Anna arrived at the bottom of the steps and flicked on the lights. The single bulb in the basement shuddered and flashed before finally emitting a thin, waxy light that flickered every few moments. They would definitely have to replace that when they finished moving in completely.

“Where are you?” she called again, drawing out the last word into a ghostly ooo. “Come out, come out, wherever you are!” The unpacked boxes of furniture and other miscellaneous items were all stacked down here in the basement. The move had happened a week ago, but they still had an inordinate amount of things they needed to set up around the house. She opened lids and pushed chairs and bags of clothes around, pretending to be deep in the search. The entire time, she kept an eye on the shut door at the back of the basement, from behind which emerged the distinctive, muffled noises of shoving and bumps that could only come from two children huddled together in an enclosed space.

“What if she doesn’t find us?” John whispered loudly.

“She will if you don’t be quiet!” Liz shot back.

Anna peered behind a sofa, where predictably only dust bunnies met her eyes. “They’re not over here,” she said for John and Liz’s benefit, then opened the flaps of a large cardboard box that stored their flatscreen TV. “And they’re not over here—”

A resounding bang shot out around the room, so loudly that Anna jumped.

“What is wrong with you, Johnny?” Liz hissed.

“That wasn’t me!” John protested.

Another bang, so loud and so forceful that Anna could practically picture the drywall splintering.

“Alright, you two, knock it off,” she said sharply. “We can’t have you breaking down the house before we’ve fully moved in.”

“I’m telling you, it wasn’t me!” John shouted, giving up all pretense of hiding.

“But it wasn’t me, either,” Liz said. “I’ve been sitting right next to you the whole time.”

Anna sighed. “Might be a piping issue, then, or something like that. Game over, guys, you can come on out now.”

“This is your fault,” Anna heard Liz say, before the doorknob rattled. A pause.

“Don’t be ridiculous,” Anna said, leaning against a bubble-wrapped table. “You’re not in trouble, but you will be if you don’t come out soon.”

Bang. Anna startled so hard she nearly slipped off the table. From behind the still-closed basement door, John let out a surprised shriek.

“That wasn’t us!” Liz shouted. The rattling of the doorknob intensified.

“I don’t like this game anymore,” John said, sounding nervous. “I want to get out.”

A bang, followed soon by another, louder one, and both Liz and John screamed this time. Then it intensified, repeating again and again and again in an endless crescendo, until it sounded like someone was pummeling against the walls all around them, turning the house into a booming drum.

“The door won’t open!” Liz yelled. “There isn’t even a lock, but it won’t open! It’s completely stuck and I can’t turn it!”

“Mom!” John said, voice pitched high and scared. “Where are you? Mom!”

“I’m right here!” Anna was already stumbling over, numb with shock, stubbing her toes against the still-piled boxes and forging a path towards the closed door. The white paint on the wood was slightly chipped, and the doorknob’s coating had rubbed away from copper to a dull metallic grey, but there was otherwise nothing wrong with it.

It had been a storage room, when they’d first seen the house. A bit cramped, a bit musty, but hardly out of the ordinary. They’d barely glanced into it for a second before the real estate agent had ushered them away.

“I’m right here, honey, hold on!” Anna staggered over the last mound of boxes and fumbled for the door. She could see the frame shaking slightly as both Liz and John presumably put their full weight on it. She grasped the handle, but immediately screamed and leaped back. She clutched her hand and stared down at it in disbelief. Her palm was raw and blistered.

“The… the doorknob. It’s too hot to hold. Like something’s burning on the other side.”

“How is that even possible?” Liz said from behind the door. “I’m holding onto it right now!”

All the while, the banging noises continued, but at this last exchange, they suddenly escalated once more. The door rattled and the sound of something snapping followed, and the pounding boomed out again and again and again until it seemed that the concrete floor itself shook with the force of it.

John was sobbing incoherently. “Mommy, please get us out. I just want to get out. Where are you?”

“I’m right here!” Anna screamed, ramming her shoulder into the door. The wood was flimsy and should’ve collapsed even under her slight frame, but it was like slamming into a wall of solid steel. “I’m right here, sweetheart, please don’t be scared, I’ll get you out, I promise —”

She grabbed the doorknob again, and though she was braced for the heat this time, it was no less painful. Like the surface of a stove, or the red-hot metal prime for reshaping that she used in her welding sessions. Her cries joined her children’s, but the knob wouldn’t budge. She peeled her hands off the knob and rammed the door again. It refused to give. The pounding from inside the storage room sped up, and were then accompanied by what sounded like wood and stone, grating and splintering.

“Oh my God!” Liz had never sounded so terrified in her life.

And as suddenly as it had begun, the pounding stopped.

Silence dropped like a bucket of ice water, so quickly that Anna couldn’t process what she was hearing at first. She wrapped her burning, throbbing hands around the doorknob, and it turned beneath her grip as smoothly as butter.

“Liz? John?” she said shakily, stepping inside. The room was dank, cramped, and cast in shadow. Even with the dim light, she could see immediately that it was completely empty. It was as though no one had been in there at all.

That was, until she turned and saw what had happened to the inside of the door. The wood looked like it had been pulverized, slivers of shredded wood hanging down in thin, long ribbons. The door itself was still intact, but just barely; she pushed a finger against the wood and it sunk inwards like a soft sponge under her touch. Here and there, at around five feet high, there were round indentations in the planks, where tiny fists had pushed and punched and hammered against the door in frantic attempts to break out. To escape.

Anna stared around the tiny, empty room, with its innocuously dusty floor and tilting shelves and the slight cold draft that seeped in through the plaster walls. Only one question crossed her mind. 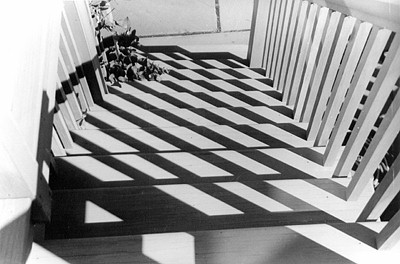 Warnings for violence and injury.

This was based off a prompt, in which the first line of the story had to be, "Where are you?"

Inspired by that one creepy room in my basement and the ridiculously big wooden splinter I got in my hand the other day. Ouch.