Maybe the sun will come out tomorrow.

Mimsy watched the thunder-sky soberly from the dirty streets. He had a little leather suitcase in his bony white hand, and on his thin-haired head, a striped fedora sat calmly. Mimsy held his things like they would be taken from him, and his deep-sunken eyes were glassy and anxious. Mimsy breathed like the air was sparse and he talked like you’d just shot his mother.

That was because Mimsy was terribly, terribly tiny. So small, he barely reached the handles of the doors and sat like a little doll on stools and chairs.

On the asphalt roads drove the cars, and Mimsy had noticed more than once, that they never went anywhere. Their lights shone emptily into the fog.

Mimsy, clutching his suitcase and that morning’s news (it said ‘The murmur of the dead is sounding through the veil of rain’), climbed into the busy street. Immediately, a car horn sounded, very much like a strike of lightning looks - sudden, jarring, abrupt. He held his shaking hand to the yellow cab that had skirted to a close at his climb onto the road.

In the middle of the street, the round greyness of the sewer cover sat in the broken asphalt. Mimsy mumbled a shaking apology to the dead-eyed drivers and dashed to the cover. He opened it and climbed inside, ignoring, to his best ability, the vile stench of feces, urine, rats, and trash.

The sewer was dark and dank. Somewhere in the black, a drip echoed like an ancient tunnel. Mimsy padded lightly on the gunked platforms and darted his eyes from the path in front of him, dark and empty and filled with fearful shadows, to the water beside him, clouded, dirty and stinking, and impossibly uncertain. At times, Mimsy imagined the hands of the dead reaching through the bacteria-infested mudwater, to drag him away to the Castle inhabiting hell. In his mother’s voice, he heard the smoke-raspy voice of his creator, “You always saw what you wished for!”

Mimsy walked for a long time, or what felt like a long time, and at some point, the peculiar sound of harmonica music sounded through the sewer. The sound of music and then the mumbling of people and the squeaking of rats, and soon enough, at the end of a long straight walk, yellow lights spilled into the rotten tunnel.

“Hello, hello, to the man who finds his way to Croc’s!” a voice screamed across the underground bar. The people at Croc’s smiled and laughed and drank foamy beers and strong liquors, too.

Mimsy with his rattling suitcase, with his newspaper, with his fedora and with his sunken eyes. Tiny, tiny Mimsy.

The Croc’s crowd didn’t stare. They had their conversations, their big people conversation. They didn’t smile in the way the above people do. The above people smiled because of poor Mimsy’s size. They never laughed because something was funny. Their laughs were signs of evil, a forewarning of their intentions.

Mimsy joined the Croc’s crowd. He sat at an empty wooden table near the back end of the restaurant. His tiny suitcase made a little clink, as he placed it on the polished floor.

The bar was wooden and the countertops were made of brilliant marble. The lighting beckoned a welcoming warmth, that even managed to seep into the unsettling scene of the sewer, the only way to enter and exit.

He remembered noting that, the first time he came to Croc’s. The only exit.

Mimsy stayed at Croc’s, twitching and shaking and feeling unbelievably cold. The people were nice, a group of men, huge and blue-eyed, offered a conversation with the sick-looking loner. Mimsy declined politely, grasping his large beer and sipping shakingly, then smiling the strangers away.

Above people were cruel and they laughed and they never spoke to him, only to coerce him into some twisted joke. Mimsy appreciated the attempts, the hands from the sewer, he realized, that reached for him and expressed want for him.

Mimsy forced a thought. He thought, perhaps this was why he loved Croc’s, and with the blatant lie standing shining and glorious within his dirt-poor mind, he found himself giggling and then cackling. Some people looked and smiled sympathetically. The strange man in the corner of the bar laughed a croaking laugh.

Throughout the evening, Mimsy saw strangers who snapped their fingers when they won their games or people who drank each time a minute passed. He saw people who adorned the silhouette of a shrimp and others with the most upright stature he’d ever seen. One man had a shaking leg and another a constant shake of the head.

A girl smiled at him. She was pretty, he thought. He smiled back and hoped the maggots in the melted meat of his gums stayed put in their hollow tunnels.

As the night neared its end, the people seemed to fade away one by one, padding out the entrance and waving goodbye to their newly-made friends. Mimsy hardly cared, not until the girl who’d smiled at him started packing her things. Her brown bag, her crooked flip phone, her lipstick.

Mimsy gulped and the nervousness tingled along with something else. Excitement, he called it, but truly things would indicate a more morbid pleasure. He downed what little was left of his golden beer and allowed the buzz to drift towards her. She exited. He followed.

Down the darkness, passing in between zones of faint light and total black, he followed the clicking of her high heels on the sewer floor. Click, clack, click, clack, the rhythmic beat enchanted little Mimsy, in his fedora and with his suitcase.

No one was around anymore. Mimsy felt a maggot tumble into his salivating mouth, and he spat it, disgusted, into the brown water.

The sound echoed across the tunnelway and the rhythm was abruptly cut off, as the pretty girl from the bar turned to look. She’d probably thought she was alone. The thought was almost enough to squander the bile building up in Mimsy’s throat.

“Hello?” she called, her voice clear and divine. She could be a singer, thought Mimsy.

“Ah, yes. I’m sorry, uh, we exchanged, um, pleasant grimaces in the bar. Croc’s, you know,” Mimsy spoke clumsily and sheepishly, with the uncharacteristic charm only a frog-voiced brit could master.

Silence followed for a moment, as only the occasional dripping from somewhere in the cement labyrinth filled the air between them. The woman’s silhouette in the night was long and lanky. She was tall.

“Oh, yes. Yes, right. But I thought I would,” Mimsy composed himself and padded closer to the lady hurriedly. For the first time that night, he whipped forth his suitcase and unclipped both the hooks. “I thought I would show you something, I’ve been working on. I’m quite, I, uh, I quite wanted to share this pleasure of mine.”

Up close (although only really reaching her knees), he could see the shapes and curves of her face, and the shadows that accentuated the sharpness of her nose and roundness of her eyes. She looked disgruntled. Confused, maybe a smidge uncomfortable. Her shoulders were tight.

In one swift, true and tried swing, he lashed open his suitcase, took the hacksaw that lay within and buried the curving saw-blade into the side of her thigh, just above the knee.

It was a confusing move to the lady, who screamed (in time with Mimsy, the excitable screech of a madman) horrifically and tumbled to the floor. Her head hit the cement with a crack and began its slow descent from her fragile mortal body.

Mimsy kept sawing. And the woman screamed and cried and Mimsy took all the power that he had been robbed of all of his life.

When Mimsy was done he threw the body into the sewer water and watched it flow away.

The woman was dead by then. Blood loss. Her name was Tammy and she wanted to be a cartographer.

Mimsy left the sewer and in euphoric bliss, he managed to find his apartment, the same as everyone else's. He collapsed on his dirty mattress and fell asleep with the most beautiful feeling in his bone-protruding stomach.

The next morning his legs had stretched out over the mattress, and his heavy feet rested on the wooden floor. Everything was the same, except now, as Mimsy gathered his fedora and his suit, he bent down to get it, he crouched and he reached. He reached down for the doorknob, he held his head down so as to not hit the roof.

The day after Tammy died, Mimsy was the biggest man you’d ever seen. With cold black eyes and pulsing muscles, the people watched him in awe as he walked down the street. Mimsy was terribly, terribly tall. He smiled at people and glared at those who he hated.

Beneath the bus stop, he read the papers. A woman was missing. Mimsy folded the paper and put it in his lap. He looked like a real gentleman. A maggot crawled out of its hole, perhaps in search of his sewer-drowned friend, but as it wiggled onto Mimsy’s tongue, he squashed it between his teeth and swallowed the corpse.

Oh, look, realized Mimsy, looking to the sky, the sun has come out today. 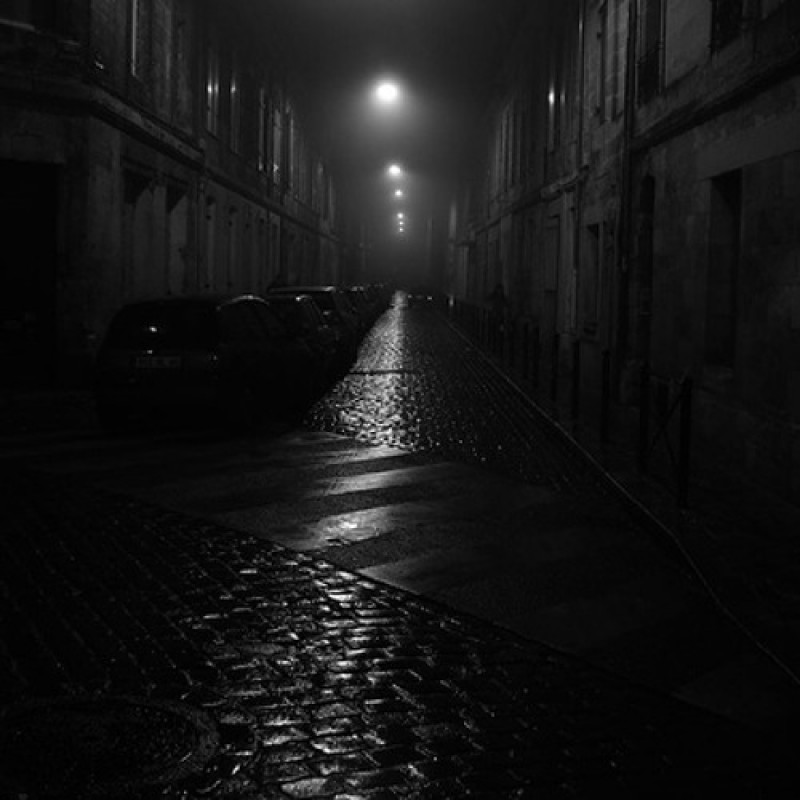 This piece was not inspired by any song title or song at all. It was actually prompted by a suggestion from my literary teacher, who suggested writing gothic fiction, not something unlike that of Edgar Allan Poe. Poe, too, seems to straddle the line between a brand of fantasy and of psychological fiction, and so that is what I tried to recreate. This piece can certainly be interpreted with the eyes of a fantasy-reader, as much of the environment is far from realistic and Mimsy's transformation from small to huge, also can be taken as some sort of magic. Although, I much prefer the take on this story, that interpretes everything symbollically. Such as Mimsy's size relating to his own perception of himself, and from that, his interpretation of the people around him, and his taking advantage, of the people who he doesn't consider a threat. Anyway, I've rambled. Bye!

Favorite Quote:
All that glisters is not gold;
Often have you heard that told.
Many a man his life hath sold
But my outside to behold.
Gilded tombs do worms enfold.

View profile
This made me uncomfortable and interested and excited all at the same time--you are so talented!!
SparrowSun ELITE said...
on May. 7 at 6:12 pm
SparrowSun ELITE, X, Vermont
182 articles 22 photos 979 comments

View profile
oh, thunder sky is good!
sorry, i didn't read it, just saw that in the begging from the page on ti. I'm not looking to read anything rn its not bc of ur writing.