“She came in on a summer’s morning—it was 1999, I think—and borrowed a pair of winter boots. I asked why she needed them, and she said that she was cold. She returned them later that day.”

“And you’ve never met her ever since?”

The old lady suddenly looked up with a sense of terror in her eyes.

Words of unimportance were idly scribbled onto my notebook. “Anything else?”

“No. I never talked to Miss Marron after that.”

“You never saw her since?”

“Never.” She looked down and fidgeted with a thread on her sleeve. Her shaky voice assured me that she had told me all she knew.

As I opened the door, I was greeted by the deafening sound of cicadas shrieking on the summer trees. Mrs. Palmore leaned weakly against the frame of her door as I prepared to leave.

“My comrades would come here very soon to stand guard. They’ll make sure that you do not leave this apartment before the investigation is over, Mrs. Palmore, because to the best of our knowledge, you are the final person that Miss Marron came across, so you are a major suspect for instigating her suicide.”

On the other side of the river, a blue tent stood erect on the broken river banks. Jon, my assistant, was already waiting for me downstairs.

“Miss Marron’s funeral?” I gestured towards the blue tent.

I handed Jon my notes for a quick look-through as we headed back to the office.

I continued walking as Jon stood in disbelief.

“And she is still a suspect? Why?”

“A person could hold a grudge for 20 years.”

“How? She only asked to borrow a pair of boots.”

“But if Mrs. Palmore was indeed the final person Miss Marron talked to, then who are those people in that blue tent right now, attending her funeral? She must have known some people in these 20 years...I fail to understand it, sir.”

I laughed and clapped Jon on the back.

“Ras! How was the suicide case today?”

The smell of alcohol filled the office with ecstasy—noon time seemed to be a partying scene at the police station.

“Just like every case before.” I popped open the lid and poured the drink down my throat.

“There had been more?” Jon gasped.

“Much more, newbie.” They handed Jon a bottle. He hesitated.

“That community is all nuts, I’d say. I’ve lived there for years, and the blue tents never seemed to be taken down! One death after another, mostly suicides though.”

“Then you’d be dead soon, Ras!” They taunted.

“Me? Never! I, Ras Rodriguez, will never die of fear!”

They laughed and continued drinking. The breeze of 70-degree air conditioning truly made one deaf of the cicadas shrieking in the heat outside.

Soon it was well into the afternoon, and the drinking revelry had already ended.

A knocking sound came from the office door, and Jon peaked in.

Jon’s lips were quivering. “We just received a report that a body was found under Mrs. Palmore’s apartment. She had just killed herself, sir.”

“He accused her of instigating Miss Marron’s suicide, even if they only talked once, 20 years ago.”

“Your honor, under supervision of the police, I searched Miss Marron’s apartment, and I found her diary in her desk drawer. She committed suicide because of constant nightmares that make her hard to tell dreams from reality, and Mrs. Palmore had nothing to do with it.”

The world began to spin in front of my eyes, and I awoke in darkness.

So it was all a dream.

The lights came on, and I found myself in a single spotlight, surrounded by policemen and detectives, standing in the shadow.

“Mr. Rodriguez, do you admit that you never investigated Miss Marron’s apartment for evidence?”

“Mr. Rodriguez, do you admit that during your conversation with Mrs. Palmore, you frightened her in order to receive the evidence you needed?”

“Mr. Rodriguez, do you admit that when your assistant Jon questioned your accusation, you did not consider his opinion?”

The world became dark again, and I opened my eyes.

The ceiling of my bedroom never looked so terrifying. I tugged at the blanket to cover myself, only to realize that it was dragged down with some strength. I turned and saw a human-shaped slump lying beside me on my bed. The person is hidden under the sheets, except for her hands, which were still fidgeting the threads on the sleeve.

Someone pounded on the door of my bedroom, and the slump beside me began to wriggle.

“Innocence, innocence…” the slump spoke in a ghastly voice. “Accusers of innocence! Death!”

I shrieked into the crispy night air, and felt myself falling, dropping into darkness.

I woke up in my office. The shrieking of the cicadas was louder than before, and now even louder than the humming of the air conditioning inside.

I checked my phone, and saw Jon’s message to me: “Sir, we’ve discovered that Miss Marron used to be a policewoman at our station.”

Utter shock slumped me back into my chair. It was only 70 degrees inside, but I felt cold as if my hands and feet were frozen in the wild winds of the north pole. I, too, could use a pair of winter boots in summer.

Suddenly someone knocked on my office door. And I remembered the slump beside my bed.

Is this still a dream, like every scene before? Or is it a reality?

The knocking was gaining momentum. No, I cannot die. I, Ras Rodriguez, do not die of fear!

The only other way out was the window. I climbed up and found myself staring at the ground ten stories below.

Suppose it is still a dream!

The next day, there were two additional blue tents on the bank of the river.

Later, people said that an intern at the police station, who politely knocked before entering the office, found the head of the investigation throwing himself out of the window. And that intern—his name was Jon, perhaps—was accused of instigating the suicide.

That happened on the final day of summer that year.

But the bitter cries of cicadas did not dissolve into the early autumn breeze. 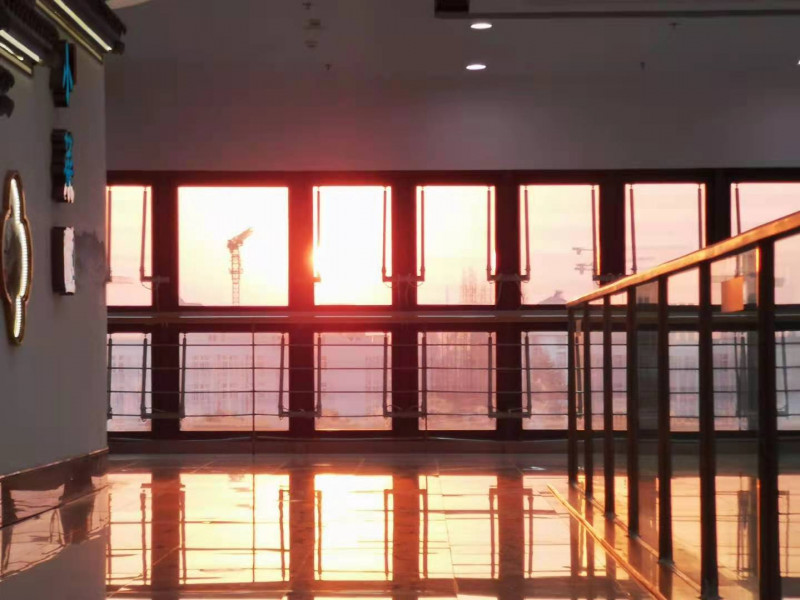 1. When Emperor Qianlong of the Qing Dynasty in China died in 1799, he was buried with a jade cicada in his mouth.