Lauren slipped into sleep, not even a second later, a dream came to her. There was a girls face, that looked just like hers. Except for those deep blue eyes that seemed to bring up the dark around her. Her hair was wavy and brown, and it hung around her face, ever so perfectly. The girls pink bow shaped lips seemed to move, but no noise came, nothing except silence. She pushed her bangs off her heart shaped face, and breathed one word "Bree". Lauren shot up, feeling sick and hot from this nightmare. Her forehead was lined with small beads of cold sweat. She Turned to look at her alarm clock, it read off 6:47, she was going to be late for the first day of her sophomore year. She got up, and hurriedly put on her school uniform,and slipped on a pair of navy blue converse. She ran out to her mini cooper, and started it up. She pulled out of her garage so fast she almost took off one of her side mirrors. She pulled into the student parking lot of Camden High. She got out of her car, almost spilling the latte she got on the way there.She flipped her hair over her shoulder, feeling the stares of all the freshman boys on her. she gave a slight smile to a few of the soccer boys, and walked into her kingdom. She reached the administration desk and got her schedule, she put all her stuff in her locker, and went on her way to her first class. She went down the hall to the left, into Mr.Shepard's English room. She entered and set her binder on one of the desks in the middle row. She sat down and crossed her legs, putting the right over the left. But there was some nagging feeling in her gut, telling her to look behind her, or else she was gonna regret it. She turned to the big window behind her, and saw nothing but a few seniors talking it up before class, nothing unusual. When she turned to face the front, one girl entering the room caught her eye. This girl had perfect pink bow lips, a heart shaped face, and brown wavy hair. This was Bree, the dead girl. 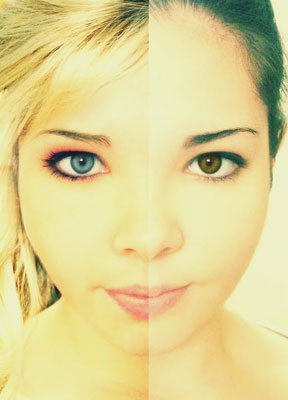