The Insane One | Teen Ink

Favorite Quote:
Better to remain silent and be thought a fool than to speak out and remove all doubt.
Abraham Lincoln

I looked out the attic window as the neighborhood boys began their usual midnight antics. Their cans of spray paint were in their full glory as the troublemakers sprayed walls and street signs and mailboxes and everything else they could get their hands on. I smiled to myself. They didn’t know I was there, but they would soon.

See, I was tired of waking up and finding my lawn torn up, or my house painted black, or even my mailbox covered in curses and phrases. I had had enough.

My house was the scary one. The one that looked a thousand years old. The one that people would dare their friends to run up and touch. The haunted house on the street, with its oblique sides and unsteady pillars. I wouldn’t necessarily call it haunted, however. Sure, maybe it was strange, but the spirits and apparitions that live here don’t haunt me, or anyone else.

And, of course, I was the one locked up in the attic. I was the insane one. My family was afraid of being even two feet away from me. They stayed away from the house, coming in just to feed me once every few weeks, and even then, it was thrown under the door. Because of this, I am thin and fragile. I’m filthy from not being cleaned. I was mute most of the time, my voice coming and going at surprising moments. I have scars on my arms from the many times I was cut by my parents, and by the times I had thrown myself at the door, screeching, sometimes with sound, sometimes with an eerie silence. If I were allowed to leave my attic, people would be aghast by my revolting and gory appearance.

Only I have heard my voice. It is soft and bell like, but if angered, it will shriek, and I could kill a man with a word. Magical, you could call it, but magic is not bad. Magic is not what you see at birthday parties. Magic is in the air around you, that glitter and sparkle you see but never think about. I do not use magic. What I do has no name.

I smiled again. I am a mad-person, I am. I could make the toughest man cower in fright. Maybe that’s why everyone was afraid of my house. And myself, of course. But I never went out of the attic. Not even now.

I leaned my palm on the window, fingers not touching the dirty glass. Five boys, five fingers. One by one, I touched my fingers to the glass, and one by one, the boys fell. Then, I slid my fingers down the glass, and in unison, the corpses of the boys slipped down through the pavement. I smiled to myself again, a smile that would haunt the dreams of any person if they saw it. I went back to the middle of the floor, and began to dance again my everlasting dance with the spirits who were my only company. 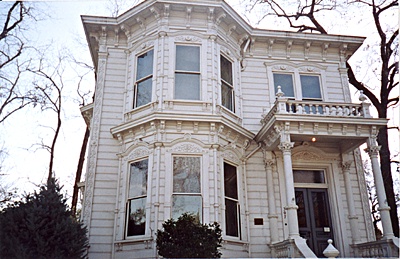 The author's comments:
Don't ignore the spirits and apparitions that haunt the world.
Post a comment
Submit your own