A Splash of Red | Teen Ink

A Splash of Red

Favorite Quote:
Never judge a book by it's movie.

Hot June air ruffled the curtains over the sink as I chopped glistening, red tomatoes for lunch. I knew my men would be hungry by the time twelve thirty rolled around, and chicken sandwiches were on the menu. I turned to the refrigerator for mayonnaise and heard the screen door slam shut behind me. From the shallow, quaking breaths, I knew it was my little Henry, coming in for a glass of water or an update on the food. I turned back to the counter beside the sink, telling him lunch would be ready soon. I gave a small glance over my shoulder when he didn’t reply, and out of my peripheral I saw that his head and shoulders dripped with red. “Oh baby,” I said, “Did pa spilt paint on you again?” But again he remained silent, so I set down my knife and turned to see what was holding Henry’s tongue. In an instant, I knew that was not paint covering my son and the kitchen floor. I ran to him, grabbing his shoulders, asking him if he was all right, where did it hurt, what happened? Henry, his eyes wide and swelling with tears, lifted a quaking little finger towards the barn, and whispered, “Pa.”
I had never run so fast in my life. I didn’t even hear the screen door slam behind me, for I was already in the barn, running through the stalls, screaming “Daniel! Daniel!” to no reply. In the half second I paused to draw breath, I heard it: the constant drip drip drip coming from below the loft. Slowly, my heart in my throat, I raised my head, and my gaze was met by the empty stare of my husband, swinging gently back and forth in a cradle of ropes, his neck opened like a gaping, red mouth in a sinister smile. Swimming on the floor in the pool of blood lay the hand scythe that had fatally slipped from his hand while he had been frustratedly tying to pick at a loose nail. As I stared in horror, I could almost see the curved, razor-sharp blade spiral from his grip before it took his last breath and caused him to topple from his seat high among the rafters.
In the barren patch where the barn once stood, a single red pansy has bloomed these three years since, and the echoes of my screams drift lazily on the hot summer air. 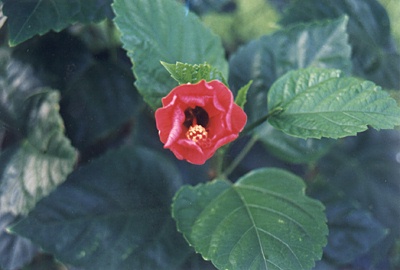