A piercing light blinds Jordan, and she squints hard. She can make out a figure weaving back and forth at the other end of the room. She holds up a hand to shield her face. There is nothing but silence in the room, but she imagines that even screaming would be more calming than this. Finally, the figures approaches the table and sets his palms down on either side. She sees that it is a man and he is wearing a wedding ring. “Where were you last Friday?” His knuckles turn white against the dark wood. Jordan’s eyes wander up to the man’s face, and she analyzes him carefully. The lines and wrinkles decorating his forehead and mouth grow deeper and deeper.
“How did I get here?” Jordan rubs her head and feels a large bump. It stings when her fingers graze it. The man doesn’t answer, but begins circling around the table until he looms over her. “Where were you on Friday?” He repeats.  Jordan remembers her friends driving her home from school. Mrs. Lennoy assigned the class a big essay, worth a large portion of their final grade. She began working on it immediately. “I was at home,” Jordan said, “working on a school paper.”
The man slams his fist down on the table, causing Jordan to jump. Her heart races and her face gets hot as she looks out beyond the light. Perhaps there is a door. “I know you weren’t at home,” the man says. “Tell me the truth. Now.” Jordan feels her throat sting, making it hard to speak. “I am telling the truth…am I under arrest?”
The pressure on the table eases up and the man loosens his fist and walks back to the other end of the room. Jordan balls up the edge of her skirt in her hands. She tries to recall that Friday again. She had been sitting at her desk, typing away when her phone buzzed.
“R u coming 2night?” the text read.
“To what?”
“Keenan’s party! OMG how did u not hear about this?”
“What time?”
“5pm. Get ready.”
Jordan snaps back to reality. The man is fiddling with something by what she hopes to be the door out. She glances around the room when she notices something. She’s never been in an interrogation room, but she’s seen plenty on TV an in movies. This feels more like a cellar or basement. The man isn’t wearing a uniform, either, but most interrogators on TV don’t. She isn’t handcuffed either. Jordan feels a chill and wraps her arms around herself defensively.
“You went to a party, didn’t you?” The man says. His voice is low, but it echoes in this room like an auditorium.
“I…I think. I don’t know.” Jordan grits her teeth. “Even if I did, that’s not wrong. That doesn’t mean I committed a crime or anything.” She squeezes her eyes shut, and the image of Keenan’s house materializes in front of her. Molly steps out of the car and grins. There are already bottles and cans littered all over the lawn, and a couple of people appear to be passed out. The two girls walk inside, greeted by quick glances and heavy bass. Molly rans into the kitchen and pulls a tall boy into a hug. The two are talking about something, but the music is too loud to hear what they’re saying. Jordan walks into the living room and opens a beer. She talks to some people, dances with a boy, and downs another drink. It might have been hours as she repeats the process over and over, but it feels like time is nonexistent. People begin to disperse. Jordan finds Molly sitting in the tall boy’s lap and tells her it’s time to go. She needs to be home so her parents don’t freak out.
Together they stumble out to the car. Molly yanks open the driver door. “Wait,” Jordan says. “I’m more sober than you. You can barely walk. I’ll drive, okay?” Molly agrees and Jordan plops down in the car.
In the basement, Jordan stares down at her shaking hands. “Did I hurt someone?” she mumbles. The man walks over to her with something wrapped around his fingers. A baby blue ribbon dangles loosely, and Jordan begins to cry.
Jordan and Molly belt loudly to the radio. Molly bounces around in her seat, flailing her arms wildly in a strange interpretive dance. Jordan laughs. “Oh my god, stop. I’m gonna pee.” Molly opens her mouth to let another verse out, but instead, she screams. Jordan furrows her brow and turns to look in the direction her friend is facing. Her body is jolted forward, then back, her head smacking off the wheel as the whole world seems to be spinning out of control. The music is still blasting from the stereo as the tumble endlessly. Jordan bounces off the airbag as the car settles on its side. Jordan’s eyes flutter open and flicker around the dark, cramped space. They settle on Molly’s head, on the blue ribbon still tied tightly in her hair. 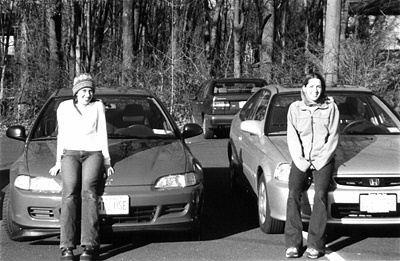 A girl wakes up in a room, being interrogated by a man she doesn't recognize. Last night was a blur, but it all comes rushing back.