What's In A Name?

Her name was Fallyn, but she didn't want anyone to know that.
She hid behind letters and hid from society.
And that was okay with her.

She clutched her textbooks against her chest and didn't spare a passing glance.
Her messily knotted shoelaces were her eyes' only interest.
And that was fine, too.

Her fingers fumbled to readjust her thick glasses while she stuck wooden pencils in her ponytail.
She silently chewed her fingernails and memorized multiplication tables.
And that was all right.

Until that moment when a menacing pair of hands reached out and squeezed her face.
Blood rushed to her brain, and a million things from freshman year biology flashed in and out of her head.

Her vision was dark.

Her head felt like it was full of lead as she tried to raise it from the hard tile floor.

She squinted and groped for her glasses.

"What?" A voice shouted. She winced.

Her hands found only hard rubber soles, connected to a booming, garbled voice.

"You can't see, can you?" It shouted again. She wished it would stop.

And then the booms were replaced by claps of thunder, laughter. It sliced at her skin and vibrated her head. She squinted and clenched her teeth.

"She can't see!" The voice couldn't enunciate properly. Unfinished words kept falling off of a tongue and spilling into her ears.

The thunder strengthened, but then lightning started to accompany it.

And once the lightning started, the thunder quieted.

She heard her glasses clack against the tile and reached for them.

They were in front of her eyes again, and she saw the huge thundercloud crumpled on the ground.

A boy in a white shirt stood to her right, holding out his hand.

She winced at first, unaware and unused to being acknowledged.

"Thank you," she whispered.

"No problem," he replied quietly, "I'm Rodney. I hope you're okay."

"I'm alright," she said, looking away, "I'm used to it. Just another little storm." 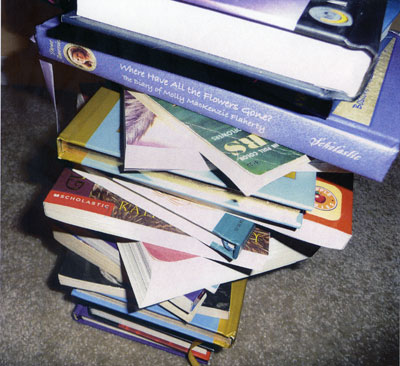 The author's comments:
Notice the first-word pattern in the first three paragraphs. Also, can you find the symbolism?
Post a comment
Submit your own

View profile
You know when you point your mouse over someone's name whille reading their work this thing pops up, and it tells you the no of comments the person has posted.
TaylorWintry DIAMOND said...
on Feb. 3 2015 at 8:23 pm
TaylorWintry DIAMOND, Carrollton, Texas
72 articles 0 photos 860 comments

View profile
Such great details, Taylor, amazing work! Sad, at the same time, of course. I liked the bits with the storm, maybe a bit more focus on the symbolism would have added fragrance to this flower? But it is still pretty amazing. As always, great reading you.
TaylorWintry DIAMOND said...
on Jun. 20 2014 at 6:13 pm
TaylorWintry DIAMOND, Carrollton, Texas
72 articles 0 photos 860 comments

Favorite Quote:
“To gain your own voice, you have to forget about having it heard.”
—Allen Ginsberg, WD

View profile
Don't apologize; it's my bad. I'm thrilled enough to see such a detailed and observant comment appear on my work! Thank you so much!
WOWriting SILVER said...
on May. 28 2014 at 2:50 pm
WOWriting SILVER, Broadstairs, Other
5 articles 0 photos 266 comments
View profile
Sorry for getting it so wrong... still a great piece! :)
TaylorWintry DIAMOND said...
on May. 27 2014 at 11:50 pm
TaylorWintry DIAMOND, Carrollton, Texas
72 articles 0 photos 860 comments

View profile
I tried to establish the fact that she didn't really mind being a nerd (much like herself), and the message was supposed to be that she was so used to the bullying that she just sort of accepted it into her lifestyle. (The symbolism was all the thunderstorm/lightning stuff.) I'll work on making that clearer.
WOWriting SILVER said...
on May. 27 2014 at 12:55 pm
WOWriting SILVER, Broadstairs, Other
5 articles 0 photos 266 comments
View profile
The pattern in the first three paragraphs is interesting, it adds a rhythm to the piece. When you mentioned having to figure out what it symbolised I immediately paid more attention. I don't fully understand it, but I think you're trying to say that her name sort of sums up her: she's 'fallen' and given up, she's never really going to try to make friends or socialise and is just going to try and hide from the world because she's kind of ashamed of what she's become? She's bullied because of her shyness and because she's nerdy and looks 'weird', which is sad.   I really like this; it's intriguing and catches the eye but I'm still not sure what the message is. Maybe stand up for yourself? I still enjoyed reading it and you're a really good writer :) Keep writing!