The movement went on as paradoxes. And in the hearts of the peoples were the lifted. And the obnoxious ones further down, protesting as satanists would capture fires from fingertips to flames to ash and dust. And the dust flew and spread into every crack and face. It nestled into the moving, engines pounding for life; Heart and machine. Red flags up and green, yellow, blue, purple, tetra-colors down with the beloved infamy of the pride....

Bloodstains and harlotry raved and heaped from the cores of the thoughts to their designs.

Didn't matter at the moment, since the two didn't clash for a while.

And the Infamers marched on like a boy with a single drum and a pair of sticks.

Banners waving, confetti floating and drifting to safe havens and twirling in currents for the death at the black gravel. The gray pavement so far from then. And into the houses fragments went, save their selves, and as the march went on. Banners of freedom passed and waved for a chance. Happy cries and a memorabilia of phrases. Songs sung high and the cadavers were no more as if it's all in a single One. The World. No worried minds. The advocate was no longer a program, never was essentially. And the hearts and the heights proved so much of that, the colors, the sounds shown so much more than a mass.

While the Keepers stepped in place.

Some would speak of Jesus having sides in the democrats, some republicans, none say neither.

All the thoughts while the Gay Parade moving through its course.

And blood-painted signs stood in hate.

'Leviticus!' and the horde screamed. Bombasted and bamboozled. Some were unable to stand against the flamboyancy and the aureate tones and basses. The pear lutes played and the colors were flagging. The flogging about to commence on the Jests' side. 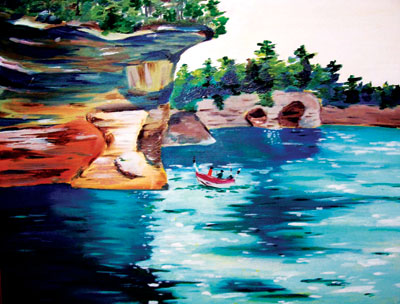 The author's comments:
The title is a pun of both "gay" as we know it and "gaiety" as not very often used, or against traditional thought of the word; the meaning of my story.

There's two sides on this: conservative christians and the gay movement. one side is blasting their heads off with hatred (not saying they as a whole do this,) whereas the other is living Life in colors. Every symbol attributes to the final cause of being a part of Life and it's colors.

This is a segment from my novella "The Lifest" I'm writing, but i often use this piece by itself since it fits so perfectly without anything else.
Post a comment
Submit your own