Favorite Quote:
"Don't spend your time on earth being a watered-down version of yourself just so people will like you."

A bit over a year ago, when word of the coronavirus began putting the entire nation into a state of hypervigilance, my mother told me that we would have to start being careful when we left the house and were in crowded streets or subways. She told me that some people would likely incite hatred onto us Asian-Americans and blame us for the coronavirus. She explained that a wave of racism and violence targeting AAPI (Asian-American and Pacific Islander) was surging in the nation, but that these attacks were concentrated in New York. After doing some research, I found that the number of Anti-Asian hate crimes reported to the New York Police Department had jumped from 3 to 28 from 2019 to 2020.

I was distraught and disturbed by these numbers, and I direly hoped that when people became more informed about the virus itself and its true origin/source, the nation would realize that this virus was not to blame on one specific race or group of people. I assumed that the hate crimes would stop. I assumed that people who had committed such crimes would come to their senses and grasp that violence was not the answer to their deep-rooted racism and hatred.

One year later, as I write this article after reading about the countless attacks throughout our nation, I know that I was wrong to assume the violence would stop. It is heartbreaking to know that my Asian-American peers and I had so much hope, only to be let down by the nation we grew up in and call our home. According to the NYPD, 2020 saw a 1900% increase in Anti-Asian violence. This statistic is likely an understatement, considering many incidents are not classified as hate crimes or went unreported. From March 2020 to the end of February 2021, more than 3,800 incidents of discrimination against Asian Americans have been reported to the advocacy group Stop AAPI Hate. Of these attacks, women made up a far higher share of the reports. Verbal harassment accounts for 68.1% of incidents, according to the report. Shunning, or the deliberate avoidance of Asian Americans, accounts for 20.5% of incidents and physical assault makes up 11.1%

Despite this unbelievably disturbing increase of incidents, I, along with many Asian-American peers, felt that this issue was not getting as much attention as it deserved. The only people who seemed open to discussing this issue were Asian-Americans themselves, and I found that many of my non-Asian peers had not read or been exposed to the news coverage of these incidents.

Today, millions of Asian Americans and Pacific Islanders (AAPI), including myself, are left feeling abandoned, frustrated, and angry. On March 16th, eight people, six of which were Asian women, were murdered in Atlanta Georgia. Prosecutors and law enforcement have debated whether or not this incident was a hate crime; a county sheriff has even gone as far as to say that the suspect had a “very bad day” and murdered these women to eliminate temptation from his “sexual addiction”. These words highlight the height of white privilege and reveal the extent to which an entire race’s gender is over-sexualized and objectified.

For countless AAPI, living in this nation entails being “perpetual foreigners” who are subjugated to the model minority myth built on the culture of white supremacy. As AAPIs, we have been taught that internalized racism is indeed okay and that in order to fit into the majority, complying with the normalized racism present in our day-to-day lives is normal.

To try to argue that the murders of Daoyou Feng (44), Delaina Ashley Yaun Gonzalez (33), Suncha Kim (69), Hyun Jung Grant (51), Soon Chung Park (74), Xiaojie Tan (49), Paul Andre Michels (54) and Yong Ae Yue (63) were not racially motivated hate crimes is utterly racist in itself. While this incident in Atlanta was one that grabbed the attention of many, the AAPI community has been struggling with severe Anti-Asian hate crimes for over a year. If you’re surprised by the violence in Atlanta, you haven’t been listening and it is time to hear our voices.

So what can we do? As students in high school, it may seem as though we cannot bring much change to the table. However, mass change starts small. We can make a difference. A common phrase, used so widely on social media to the point where it is numbing, is to “shop Asian-owned businesses” as a way to support the AAPI communities that are have been harmed from hate-crimes. The misconception that our nation can somehow buy or shop our way out of xenophobia must be broken. Real change starts with reevaluating the parameters and punishments for “hate crime”; educating yourself on the model minority myth; contacting your lawmakers about policies that hurt AAPI; having serious conversations with friends and family, especially those who overlook this issue; questioning the internalized and normalized racism that you may have been complying with without even noticing it. We are the future of this country. The decisions we make, the conversations we have, and the knowledge we obtain will shape our country- for better or for worse. The AAPI community is rightfully hurt and full of sorrow. To create change is to be the change- we need it for ourselves and our future generations. To be silent and stand idly by as thousands of AAPIs are assaulted, harassed, and murdered, is abiding by and conforming to the systemic racism that divides our nation. 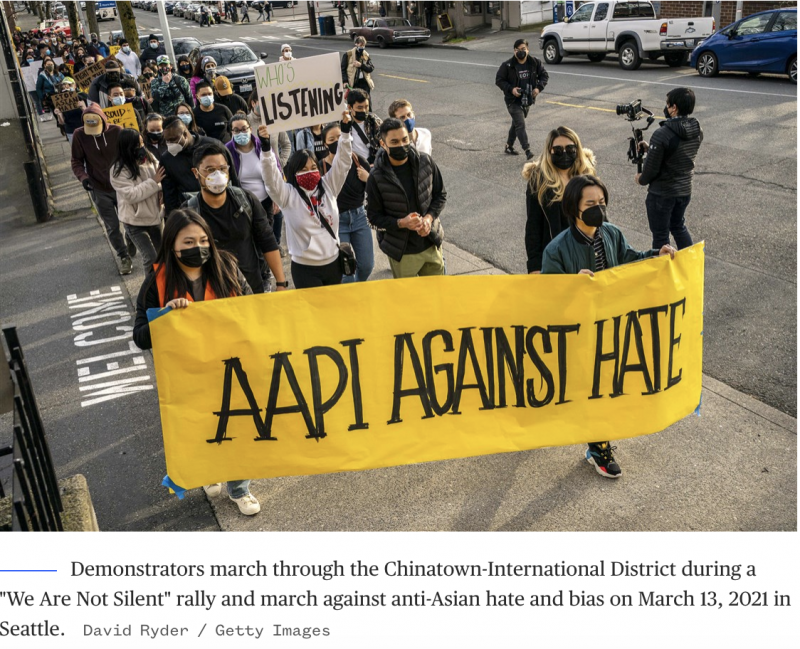