“White lies always introduce others of a darker complexion.” – William S. Paley. In Scene Two of A Streetcar Named Desire the protagonist, Blanche, explains to her social foil, Stanley, her assessment of her “fibs,” claiming to tell the truth on truly “important” matters. However, with Blanche’s ambiguous character and her need to maintain external appearances, her definition of veracity is called into question as to whether her “fibbing” is only trivial or a tool to whitewash her own circumstances and character.

While at first, Blanche primarily presents herself as a superficial Southern Aristocrat, within the closing of Scene Two she discloses her shrewder nature calling Stanley on his suspicion and “laying her cards on the table.” Though Blanche initially disguises the nature of the financial documents as love letters, she gives in when she realizes the attempt is futile. Stanley, after reading the papers, quickly discovers that Blanche had been in fact telling the truth about Belle Reve and the lost mortgage, which reveals some authenticity on Blanche’s word. Furthermore, while Blanche cannot be called veracious, she is not a total liar, holding some value on economic matters, to which she had mostly revealed the truth, not discounting her loathing of Stanley. Furthermore, it is important to take into account Blanche’s devotion to her sister, Stella, and her claim that “when the truth is important I tell the truth and this is the truth I haven’t cheated my sister or you or anyone as long as I have lived.”

Nonetheless, Blanche raises the issue of the degree of “importance” in one’s subjective in relation to others. A blatant paradigm of Blanche’s fibbing is found in how she hides her drinking habit, “touching” it more than she cares to admit. Furthermore, As a woman raised and bred on the social graces and airs of the upper South, the backbone of Blanche’s self-esteem streams from her heritage and her attractiveness. Others are highly aware of this spectrum of Blanche’s personality, as Stella requests her husband to compliment her sister’s appearance, emphasizing Blanche’s “little weakness” of her superficial appearances. In addition, as she had previously revealed in the Scene One, Blanche had been meticulous not to gain a single pound since her days at Belle Reve, taking an evident stance on the maintenance of her physical appearance and society’s acuity of her. Furthermore, “A woman’s charm is fifty percent illusion,” is a perceptive self-evaluation of Blanche’s character on her part, exulting sexuality and confidence, while also wearing cheap furs and costume jewelry. Blanche is obviously very devoted and dependent on her physical beauty and sexuality, valuing her appearance even though it’s merely made out of rhinestones and sequins

Blanche’s rationalization of her “fibs” is questionable and yet appropriate considering her character. As for the fact that Blanche does place some importance on her financial situations, she does understand some of the differences between fibbing and reality. Conversely, Blanche’s “fifty percent illusion” charm is misleading, and somewhat shallow, taking her preoccupation with her substantial sensuality, which to Blanche is not so trivial, and how much of that is based on artificial means of enhancement and seduction, simple perfume or gaudy clothes. However, so far Blanche’s “fibbing” merely consists of her appearance and her drinking, taking importance to her stature, but not yet harming others in the vicinity, to which she claims she’d never do. 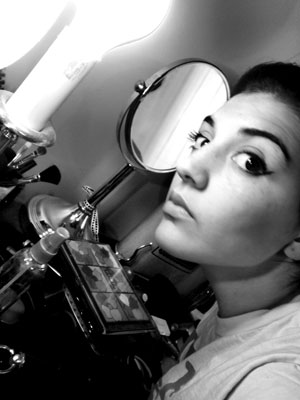 Favorite Quote:
"Live IN The MOMENT lifes too short"