The apartment building is a rusted, forgotten shade of brown, matching the naked trees outside in the chilling December rain. The sky seems bright and dim at the same time, its whiteness blinding but still subtly subdued by the drizzling afternoon. I want to get to that door - soon. And I do, after stifling the urge to jump around in protest of the cold. New York enjoys playing games on my Carolinian blood, or so it seems.

The elevator, now hidden behind a door, rumbles down the shaft. Fourth floor. That’s where she lives with him. I take in every detail of the senior complex, tweaking each to convince myself that she should be someplace better. Anywhere but here. I step off to face a bland, sandy corridor. Turn left and keep walking. Look for 14D on the door.

I stare conscientiously at the wrong end of the peephole before pushing the buzzer. I hear movement inside, but no reply. The clock downstairs had read 12:34 p.m. Hopefully she hasn’t just woken up. Instead of ringing again, I do us both a favor and let myself in. I know the door is open.

Last summer was the last time I was here, and so I don’t know why I’m momentarily surprised. Could so much have changed? A warm breeze of dried herbs and medicines, peppermint gum and baby oil beckons me to take off my shoes and step farther inside. I obey. Some things would always be the same.

“Grandma, it’s me,” I announce. Slouched over in her wheelchair, my grandmother looks up. I hug her tightly, keeping my hands on her shoulders. Her hair must have been dyed a few weeks ago, but now the white roots have claimed their space again to make everything look divided half-and-half, black and white. The contrast is too striking for me, something I can never get used to.

My grandmother’s body seems so small yet shapeless, decades proving its victory over her. Her skin is so wrinkled and calloused, the back of her hand a parched tributary of veins. But her eyes are still alive and expressive, and she hasn’t lost her voice - yet.

We talk politely. There’s nothing I can really talk to her about because she doesn’t really want to know anything, I don’t think, and I don’t feel entirely at home. I feel useless, helpless, unable to do anything to improve her life. I try to believe my presence is enough as I strain to hear her, mentally commanding all the noises in the apartment to stop so she can speak. I hate asking her to repeat herself. As we talk, I look around; her home seems so small, so uncomfortably snug. I marvel at how everything can fit - the bedroom, the bathroom, the kitchen - without an inch of space wasted.

Perched ubiquitously on shelves and windowsills are photographs of those whom my grandmother wants to remember. They’ve captured her youth, her parents, her husband and children, even me. The faces smile, stare, twinkle at nothing really; they’re all memories frozen in time. Not one is more recent than ten years ago.

She’s trying to get up for some reason, determined to stand on her weakened legs. Frustration flashes across her eyes but she faces familiar defeat. Parkinson’s has made her joints and muscles a wistful memory. I remember only one time when I saw her run.

I cringe and bite my lip against my tears and ask, “Do you need something?” She points to the phone and says, “Call your grandpa.” He was running a little late. I push the numbers on the telephone. The conversation is short, formal, clipped. He’d be here in a few minutes, “Don’t worry, nothing’s wrong,” I say.

With each minute my desire to leave increases. I love this old woman sitting so frail and brittle in her mobile prison. Seeing her pain merely reminds me that there are limits to what I can do for her. Even though I know my grandfather takes outstanding care of her, there’s still no cure for her disease.

When my grandfather returns, I hug him too and tell him how much I’ve missed him with real sincerity. But when he asks me to stay for lunch, I mumble something about plans and promise to come back before I return to my home in the South. She uses a bib when she eats - 72 years old and she uses a plastic bag as a bib so she won’t get messy. Even in public, he brings along a glaring white bag to put on her.

Harshly, I’m brought back to the icy drizzle of the world outside. I’m allowed to cry now, rivulets of rain indistinguishable from my tears. But do I? I suddenly can’t remember what exactly I had planned to do later that day. I stand still for a moment and decide where to go. 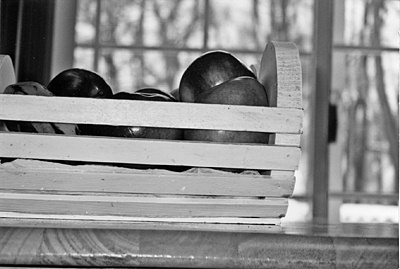