It was Christmas Eve, 1994. I gleefully put the plate of cookies by the fireplace where the stockings were hung and tiptoed to my room, waiting to hear hoofs and sleigh bells. As I lay in my bed, giddy with excitement, I thought about Santa Claus, who had faithfully come to my home every year since I could remember. Santa Claus, on whose knee I had sat at the mall and bookstore. Some kids on the playground had said that this man, whom I had met in person, did not exist. However false this accusation seemed, there was something about it that nagged at me. With these skeptical thoughts, I nodded off to sleep. I awoke the next morning forgetting them and raced to the living room, where our Christmas tree stood proudly, sheltering piles of Santa’s presents for my family and me. Something happened, though, the following afternoon that changed my life forever.

I was taking something out to the trash and as I circled the house I saw a pile of cardboard boxes. On closer inspection, I realized they were the very boxes that all of Santa’s presents had come in: a J. Crew box from my dad’s shirts, a Barbie box and other miscellaneous boxes from the North Pole. I didn’t think that Santa’s presents came in standard boxes from Toys ‘R’ Us, and why would he leave all his trash behind our house? My suspicions grew.

A few days later, I was poking around in my mom’s jewelry box when I found a picture I had drawn for Santa a few years before. Why would Santa not take it, and why would my own mother stash it away for herself? The grim truth dawned on me. These two events, combined with the whispers on the playground, convinced me that Santa wasn’t real. I came to believe this new and most solemn truth that only mature children can handle. I dealt with this sad information as best I could, struggling to be strong and pretend I didn’t care - but I was crushed.

I couldn’t bring myself to tell my parents that I knew. I waited until the following Christmas to tell them that that phase of my childhood had ended, and I no longer would stay awake listening for hoofs on the roof. The mystery of how my bike fit down the impossibly narrow chimney was solved.

In the following years my parents conducted Christmas as though nothing had changed - they did their best to help me deal with the loss by letting me pretend that Christmas was still a little magical, and that the world was not entirely scientific. I felt that since I didn’t believe in Santa, some of the magic of Christmas was gone.

Over time, though, I helped fill stockings and buy presents and Christmas became something different. It was dinner with aunts and uncles and searching the shelves of Macy’s looking for something my mom would like. Christmas morning was no longer a mad dash to see what Santa had brought but a quiet celebration with my parents taking turns opening presents and watching their faces light up when they saw the book or shirt I had picked for them. And when I walked by "Santa" at the mall, knowing all too well that the potbellied man sitting there was not from the North Pole, there was still something special about the scene: children sitting on a stranger’s lap being told that their wishes would come true.

Christmas of 2003 came and went, and our tree, heavily adorned with inherited ornaments and Popsicle-stick Jewish stars, filled the living room with the smell and feel of the holidays. A week and half later after the ornaments and lights had been stripped away, the tree stood uncovered, but somehow complete. It had watched us on Christmas morning, and stood as a monument to affection and warmth and magic. My dad and I tied it to the roof rack of my car and drove to where the trees get recycled - a journey that my dad had taken alone, until now. I turned onto the dirt road that led to the drop-off and came upon a desolate scene. There was a huge heap of naked Christmas trees, piled recklessly in the middle of an empty lot. I felt like I was behind the scenes, and had passed into adulthood by witnessing this macabre post-Christmas ritual.

My dad saw the look on my face and laughed as he put his arm around me. He knew that this was another stark realization, like when my seven-year old Santa mystery was solved. I had once again transitioned from one phase of childhood to another level of reality. I thought of the playground full of gossiping young detectives, and of the little kids who didn’t notice that Santa was at the bookstore and the mall at the same time. I remembered the cardboard boxes behind my house, and felt like I had rediscovered it nine years later. There were pieces of tinsel blowing on the branches as my dad tossed our well-loved Christmas tree onto the heap.

We got back into the car and my dad smiled again. I put the car into reverse, backing away from the trees, and from my childhood. Those trees had all stood witness to one of the most cherished celebration in the world, had filled houses with the smell of Christmas - they had all, for a time, been a part of a family. 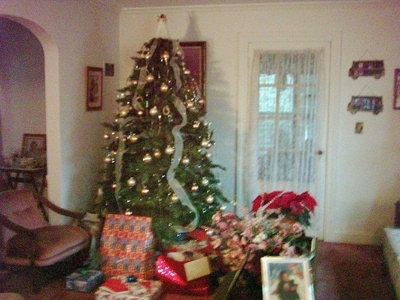