A Cryptic List of Cryptids and Other Obscure Monsters | Teen Ink

A Cryptic List of Cryptids and Other Obscure Monsters

Very Important Warning:
This was written for entertainment purposes only. NOT for religious purposes, as in not for starting creepy cults or anything else of such a dark nature. Comments and jokes from the author about these creatures have been included`. Also, may contain puns, so do not read if you are allergic to wordplay.

Introduction
If you're reading this, you might be reading this in the hopes of finding something that doesn't mention Bigfoot or the Loch Ness monster or unicorns. If you are, then you're in luck! You might have surfed the Web in search of info about little-known monsters, only to find lewd freaks, plagiarized info, and stuff that shares the name of the creature you have looked up....but is in fact a brand of knife or something else. Some of these creatures are indeed different from the werewolves and mermaids you have read about so many times before.

You think since this bulky cervid is featured in Greek mythology, it'd be easy to research, but is it? If it is, do you remember reading about something like a beefy stag that changes color like a chameleon in order to escape hunters? Probably not, but you probably do now! These bullish deer are said to live in an area between Greece, Turkey, and Scythia. I think of it as an especially adorable pet, something like a fat muntjac, but without the messy fuzz on the antlers. Now all you need is a collar and a cute name, and have your protagonist call and hear the clicking of hooves. “Bussie! Come here, girl!”

Unfortunately, the name for the deer is confused with the name for a knife brand, a park, et cetera, so when it comes to pronunciation, no one knows for sure if the deer's name is different from other things with the “Busse” moniker.

Other than in “Final Fantasy” and “Dungeons and Dragons”, the nocturnal carbuncle hasn't really got into stardom, especially not the Irish variant, which is an aquatic animal with a pearl decorating its head. The much more familiar variant is a feline or canine creature from Argentina and Paraguay (I doubt it looks like Pikachu. Small ears and feline build, please) that is probably green in color, and sports a ruby in its head. The carbuncle (especially the terrestrial South American species) has the ability to sense a nearby human’s desire, which in most cases, is for the possibly scaly creature's gemstone. Every time some greedy hunter tries to get this valuable head ornament, the carbuncle suddenly emits a bright light that may make it seem like the little guy just exploded, and this scares off his adversary. In those cases where a carbuncle meets someone who can care less about the gemstone, the pearl or ruby simply falls out of the animal's head, and its former owner will wander off to do its own thing. Or at least I think it's that undramatic.

In a place (Southeast Asia) where a big cornucopia of creatures, ranging from the first species of vampires to carnivorous sentient trees to possessive ghost-bird-tigers, threaten the lives of humans every day, there needs to be a good guy somewhere. Southeast Asian folklore gives us the weretiger! The harimau jadian doesn't attack humans as much as their truly animalistic counterparts, and instead serve as guardians, unless the werecats get very upset about a human action or are in desperate need of food. They are described in human form as not having the groove in their upper lip, and their transformation into big striped cats is recorded in impressive detail: the transformation starts at their feet and hands, then goes up to their limbs and torso, orange fur appears and begins to darken with stripes, the tail manifests, and the shape-shifting finale is the head. By then, they are like normal tigers in appearance, but note that no two tigers have the exact same stripe pattern.

Considering that these stone beings have hands, arms, and chests made of human flesh, everyone who has heard about them would say their hearts aren't made of stone, right?

Wrong, actually. Whether local myth says the monster is only a seven-foot-tall squamous female loner or a lithic part animal part human race or even as a hairy caveman, all descriptions have one thing in common: the nargun is described as a sinister cavedweller with a habit of snatching up travelers and children who get too close to their caves. Even in the contemporary fantasy book, The Nargun and The Stars, Australia's earth elemental is featured as a villain incapable of pity. Whatever illustrations  there are of such a monster seem to make the nargun as ugly and boulder-like as possible...not like the animated statue I imagined. Why she or it has a species of mushroom named after her, the nargan's bonnet.

If you want to know what to look out for when you're near a cave or shady waterhole in the Australian bush, here's what might hint at the nargun's presence: eyes glistening in dark areas, a creepy feeling that someone is watching you, and perhaps a call that might sound maniacal, "nga-a-a-a!". I don't recommend shooting or throwing anything at the nargun, for the nargun's stony body can not be harmed by boomerangs, spears, not even bullets, and judging from some reports, whatever hasn't bounced off its body is probably caught by the monster and thrown back at the weapon's owner, sometimes with deadly accuracy.

Because of the nargun's ability to deflect any bullet or projectiles, many say the nargan is indestructible. A few stories about aborigines managing to kill narguns appears to debunk this belief. One incident in which a native woman named "Lilly" had a tussle with one nargun claims this was the only time a human being defeated or possibly killed a nargun. Unfortunately, nobody knows how this heroine pulled off such a hard stunt or even if she succeeded. Did she lure her stone-skinned opponent into letting its guard down and then stab the nargun in the soft chest with a knife? Or did the woman sneak up on the nargun and break its stony bulk into pieces? The version in which Lilly won ends with a sour note: some time afterward, Lilly, or whomever, fell into Lake Mystery and was caught by a bunyip (monstrous aquatic marsupial). At the time Australian aborigines became familiar with European names, three men with such names successfully killed a seven-foot-tall nargun.

The story of a ferocious lump of stone was originally a myth made up to keep nosey folk away from caves sacred to the natives. And before science and scoffing became a phenomenon in Australia, it had worked quite well.

Pascuense Bovine
The mythology of Easter Island has been largely ignored. Instead, most would focus on the famous stone statues or moai and the mystery behind them (I once had a book that had an account on how the ancients transported and lifted them). It's even sadder to think that the glyphs (called rongorongo, which were written on wood slabs) that probably contain valuable information are still undeciphered. What some eager adventurers and anthropologists can find in what's left of the island's folklore came from what the islanders can remember, and one story had a type of goat or antelope that supposedly lived on Easter Island when the legendary king and founder, Hotu Matua, discovered the volcanic landmass. The animal was described as having wide spreading horns, but nobody knows if the horns were smooth or spiraled or moniliform. It is also noted that the obscure animal had litters of six kids or calves at a time. Perhaps the reason why none of the goats or gazelles or whatever are no longer around might be that the islanders killed them off before the animal can be thoroughly ingrained in their culture, and this may explain why there are no murals featuring the mammal. Either that or the drying climate and erosion played a role. The likely reason why no bones are found is the volcanic soil of the island is probably not good for preservation or the bones were ground up for a certain use. Even though the book where this strange animal “dwells” states the possibility that it never existed, perhaps it once did.

Rainbow Tiger
I think it really is sad that Bigfoot is the only cryptid, other than the thylacine, that the newsgroups will ever mention, because some Ecuadorians think there's a much more colorful creature lurking in their forests. Think of an aggressive, big, gray or black cat similar to a jaguar that lives in the trees and has a pink or red, yellow, and white striped chest and hand-like paws, and you have what some will call a rainbow tiger, or a tshenkutshen as the Shuar tribesmen call it.

Strangely enough, there is a rainbow of stories about hunters meeting with natives and hearing about the most terrible and colorful big cat in South America, but I don't know just how reliable they are, considering these encounters are mostly recorded in blogs.

Wulver and Similar Werewolves
The seemingly modern idea of benign werewolves is not so new. Scottish myth has a werewolf that occasionally leaves some food at a poor person's door. Otherwise, the Scottish wulver has pretty much nothing to do with its human neighbors.

Some of the werewolves in Portugal are even more harmless than the wulver. Instead of attacking people like a demonic animal, the benign Portuguese werewolves are thought to be easily frightened by everything, especially suspicious light, so when someone is covering their windows during one of those howling fits caused by wolves, that person might be showing some sympathy. The legend of the harmless Portuguese werewolf was at its peak during the fourteen hundreds, for many travelers in Portugal claim to have scared off humanoid wolves with just a shake of their lantern.

Guynup, Sharon. Why Have Tigers Been Feared and Revered Throughout History? National Geographic, 9 Apr. 2014. Web. 24 June 2017. 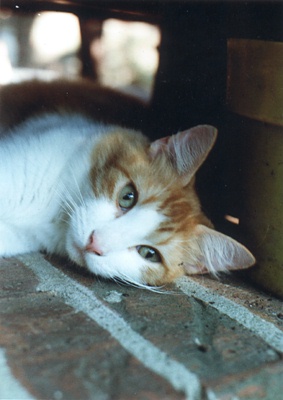 I didn’t completely made this little research project up, so this might not count as fiction, despite the rather fantastic subject. Editing suggestions are appreciated.

Favorite Quote:
"Everybody is a genius. But if you judge a fish by its ability to climb a tree, it will spend its whole life believing that it's stupid."
-Albert Einstein

View profile
I cannot believe it! I have been interested in cryptids since grade school, and I have never met anyone else who has shared my interests. Now, I finally found somebody! (P.S. I am a fan of your work, and I hope you keep your creative flow flowing!)