Myhero was my best friend. From the time I was three until I was six, we wereinseparable. We played fetch with our special ball and tug-of-war until we couldtug no more. We dug holes around the yard, and at meals I always saved a littlefood for Buddy. We even had a secret hide-out behind the bushes where we spenthours.

I told him everything that happened during the day, and I used tothink he talked to me. In the winter we would play in the basement. I broughtdown my toys and shared them with him; I used to pretend we were cowboy andhorse.

The only thing I could not do with Buddy was take him for a walk.He was a German Shepherd and Collie mix and much stronger than I was.

Theday I remember the most, as much as I try to forget it, is the day he died. Myfamily and I were all out shopping, except for my grandparents. When my dadcalled my grandma to tell her when we would be home, my grandma said Buddy hadfallen and was not breathing. My dad told me the bad news, but I thought hemeant, "Buddy's old and he might die any time." What he was saying was,Buddy had died. My dad had a tear in his eye.

When we got home I asked,"Where's Buddy?" This time my dad's message was clear. I didn't knowwhat to do, I was only six. I ran to my room crying. I don't know how long I wasthere, but when I came out I asked my dad what happened. He told me Buddy wasold, and it was his time to go.

I will never forget Buddy or what hetaught me, including that heroes come in many shapes and sizes. They can even befurry. For me, Buddy will always be my hero. I would give him a gold medal anyday. Sometimes I think I see him in my room, or behind the bushes. There's nevergoing to be another dog like Buddy. 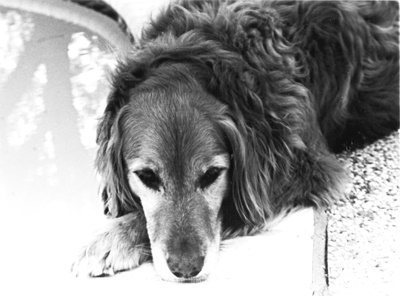