An Apple a Day: How Salinger’s Orchard Provides For Putnam Valley, NY

At first glance, Salinger’s Orchard seems like nothing more than a small fruit farm, but during the COVID-19 pandemic, the proprietors of this orchard stepped up and provided for their community when they needed help most.

Anyone who enters Salinger’s Orchard is instantly transported to an atmosphere of smiling faces and the sweet scents of cinnamon, apple pie, and freshly baked doughnuts. Growing up in such a place could only seem like a dream come true, and current owner Tim Salinger, 40, was raised living that fantasy.

Located in Putnam Valley, NY, this family-owned orchard has been in Salinger’s family since 1901. “I grew up here, I was raised here, I got dropped off here by the bus everyday. I wanted to preserve my family’s heritage and keep the farm going.” He added, “It was for sale for seven years, and I didn’t want to see the farm disappear.”

On what makes Salinger’s unique, employee Lena Cash, 56, said, “I’ve been coming here since my children were little, and now I bring my grandkids here,” she commented. “My favorite thing is that it’s a legacy business, it’s a fourth generation owner and I think that’s really cool, and supporting small businesses and private ownership is very important to me.”

Shopper Ian McNally, 27, agrees. “When I first moved to Putnam, I visited Salinger’s and was amazed by how good the food was. I started bringing all my friends and family, and my best friend even started working in the kitchen here.” McNally said a combination of great food and personal connections with staff keeps him coming back weekly to purchase groceries from Salinger’s.

On a quick trip to pick up mixed berry pie, Anthony Renna, 53, said the convenience of Salinger’s Orchard is what attracts him. “I love that I don't have to drive two hours to get fresh apples, donuts and pies. It’s close enough that it's not an entire day and it's far enough that it's still a little bit of an adventure.”

Like many small, suburban towns across the United States, the arrival of COVID-19 sparked a wave of paranoia and many individuals struggled to purchase necessities. Putnam Valley’s reaction to the pandemic was no different, and that inspired Salinger’s Orchard to step in and help. “When the pandemic first hit, we weren’t sure if we were going to have to shut down, but we worked with New York State and they told us that as a farm and as a grocery we were to stay open and be an integral part of being an essential business.” He continued, “We’ve become a local grocery store, at least for our community, especially providing different products: food, milk, breads, even toilet paper and paper towels.”

For employee of three years Christian Rhodes, 17, the pandemic caused a lot of change at Salinger’s, but the most important aspects have stayed consistent. “There’s definitely been a big shift but a lot has also stayed the same. We’re required to wear gloves and masks, of course, but the same people still come in and order their regular things.” He continued, “During such a rough time, it’s nice to come in and see familiar faces.” 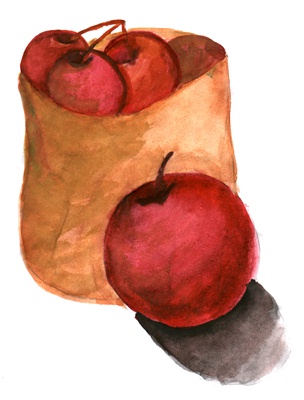 Salingers Orchard Store is a family-owned business in Putnam Valley, NY. It has been family owned since 1901, what makes this orchard so unique?