“Hello we are CN-25 and we will be performing a scene from ‘The Merry Wives of Windsor’ Act 2 Scene 1. My name is Molli Hepworth and I will be portraying Mistress Page,”

“And my name is Natasha Anderson. I will be portraying Mistress Ford.”

These words mark the beginning of the second of three performances happening today. Molli and I spent the last month and a half trying to perfect our cute little scene about two close friends receiving the same love letter from the same man. Currently you can see us standing in the front of a classroom in Southern Utah University’s student center, all dressed up like 50’s housewives. I’m in a plaid blue dress and Molli is wearing a black dress with white polka dots, our hair is done up in classic victory rolls in the front with rest curled; we spent hours putting together our outfits just for this moment.

The beginning starts just like every rehearsal leading up to this performances. I start to walk “off stage” to the right which, in this little classroom really means to go face the wall until my time to come on stage. Lucky for us, I realize my stupid mistake before it’s too late to fix. I switch to the left side instead of the right to keep us from becoming confused during the scene. I really hope no one notices that I mixed up my left from my right like an idiot.

“Mistress Page! Trust me I was coming to your house.” I run up and kiss her on the cheek like a fancy lady from Europe’s greeting. We continue through the scene reading love letters, becoming offended because both came from “Sir John Faltstaff,” me momentarily falling for him,  then “seeing” our husbands walk by and deciding to take revenge.

“Let us council together against this greasy knight, come hither.” With that line Molli starts to pull me off stage, but we both stop for me to say “Thank you” to our audience before she pulls me too far. We then turn around to strike our set, putting the pieces of the fragile tea set back into the milk crate one piece at a time. After that process, Molli picks up the table with the milk crate on it, and I grab both of the chairs, one in each arm. We move our set over to the back wall of the room to watch the other scenes. It only takes about two minutes for Molli to decide she’s bored and texts me about our scene instead.

I agree, the vibe was off

Also you almost started on the wrong side of me haha

I think our next one will be better though, I was just nervous this time

Me too. Hopefully we’ll do better next time

Wait.. where did Damon go?

IDK wasn’t he supposed to help us carry our table?

Kk should we go now?

As soon as the couple on stage finishes confessing love to one another we leave the room, struggling to hold the door open and carrying everything on our own. Our long trek to the Geoscience building goes gruellingly slow due to our heavy load and heeled shoes. When we finally make it there, we see short, brown haired Kalia waiting at the door for the previous rotation to be over.

“Well, I was trying to go see everyone’s scenes and monologues with Damon, but I don’t know where he went, so I decided to come here to see you guys!”

“Damon left us too,” Molli said. “Could you take the tea set off of the table, I feel like it’s gonna fall.”

Kalia stretches up onto her toes to grab the milk crate off of Molli’s table. “I guess we’re just Damon’s regecties,” she says with a grunt as she stumbles back from the weight of the crate.

Just a few seconds later the session in the room before us ends. The door swings open, and a bunch of people pour out of the room. I see a pair of girls dressed as 50’s housewives much like Molli and I, as well as a couple of guys dressed in classic shakespearean clothing, followed by a trio of ladies in pajamas carrying sleeping bags. The rest of the performers probably either left early or blended in with the ten to fifteen parents and friends there to follow their performer around. As soon as the path clears out Kalia, Molli, and I pick up our little set and make our way into our assigned room.

I notice that this room differs from the stereotypical classroom we performed in the last two times. Instead of rows of desks connected to their chairs, I see long strips of tables with wheeled computer chairs behind them. Instead of flat ground, the floor steps up like stairs all the way up to the back of the room. This meant we either drag our table, chairs, and very fragile tea set all the way up to the first set of empty seats on the third row, or leave them next to the door. Molli, Kalia, and I exchange glances, trying to make our choice without verbal communication, but I very quickly give up upon realizing the doorway is currently blocked by our table and chairs.

“Let’s just leave them here” I say, while setting the chairs down in the corner just out of the way of the door. Kalia and Molli both mumble in agreement so we set everything down, then go up to the third row and take our seats. Mr. Sorensen and his wife, Lesil, come in a minute later and sit next to us, excited to watch us perform. We hardly talk at all due to the loud buzz of chatter already in the room, so we just quietly sit and wait for the judge to take control of the classroom.

“Alright, could I have everyone’s attention so we can begin!” Silence fell over the room as the big, bearded judge’s booming voice swept over everyone. “We’re going to start with the duo scene from Bear River High School…”

He listed off four or five other school names, but hearing our school brought a wave of nervousness with it that made me stop listening to him. I glance over at Molli and she mouths back “I don’t wanna go first.” I see the anxiousness in her eyes too, even though we know this scene very well. Somehow the judge’s voice that made my ears ring before, I am able to completely ignore now. Eventually I notice that his mouth stops moving, so Molli and I stand up and walk to the front of the classroom to perform our scene one last time. We drag our table and chair to the center of the room, set up our little tea set, grab our letters, then stand next to each other right in the front of the room to begin.

“Hello we are CN-25 and we will be performing a scene from ‘The Merry Wives of Windsor’ Act 2 Scene 1. I will be portraying Mistress Page,”

“And I will be portraying Mistress Ford.” After this, I walk off to the right side of the classroom, then we begin.

“Mistress Page! Trust me I was coming to your house!” With this line, dread set in on me when I realized my mistake. I start on the left side of Molli, not the right. The fact that I kiss her on the cheek at the very start of the scene makes the situation so much worse. Time seems to stop as panic sets in. Which side do we usually go to? I don’t know; I think I go to the left. This is the only idea I come up with in my few seconds to think, so I guess the left side works.

I go to her left cheek praying she decides to go to my left too, but God must’ve been preoccupied with a more important prayer. She goes to MY left instead of HER left. If I thought I felt panic before this moment, it turns out I was wrong. The bright red outline of her lips she left on me, half on my cheek half on my lips, brought more panic and anxiety with it than any experience leading up to this moment. When I see Molli’s eyes I see she feels it too, but the show must go on.

She says, “And, trust me, I was coming to you. You look very ill” while, almost violently, trying to wipe the lipstick off of my face before I turn forward with my next line and reveal our mistake to the whole audience. Revealing that my first kiss happened by accident, in a SUU classroom, with my best friend, in front of my theatre teacher. We keep going through the scene as usual, with some sort of a newfound confidence. If we just pushed through literally kissing on stage, then all excuses are gone. We have the potential for anything.

After the scene finally ends, I know we both dread the inevitable moment when someone says something about our kiss, but surprisingly enough no one brings it up. The only reaction we see is  Mr.Sornsen sending a text to the drama council group chat saying: Tasha and Molli… THE BEST I have ever seen you do your scene!!! I’m like a proud dad!

Molli is the first to see the text. She silently turns her phone towards so I can read it, then we look at each other sort of awestruck, and laugh. Was our kiss really not seen by everyone? I look over to Mr.Sornsen just to see a big proud smile on his face and a thumbs up. The kiss definitely went under his radar.

We sit through the other four scenes trying to let the embarrassment wear off, but also thinking about what just happened. This mistake seems so glaringly obvious to us, yet somehow everyone else overlooked it. I guess people just… don’t see every mistake you make. Even when you are what everyone is focusing their attention on, you aren’t really under a microscope. There is plenty of room for error in a good performance. 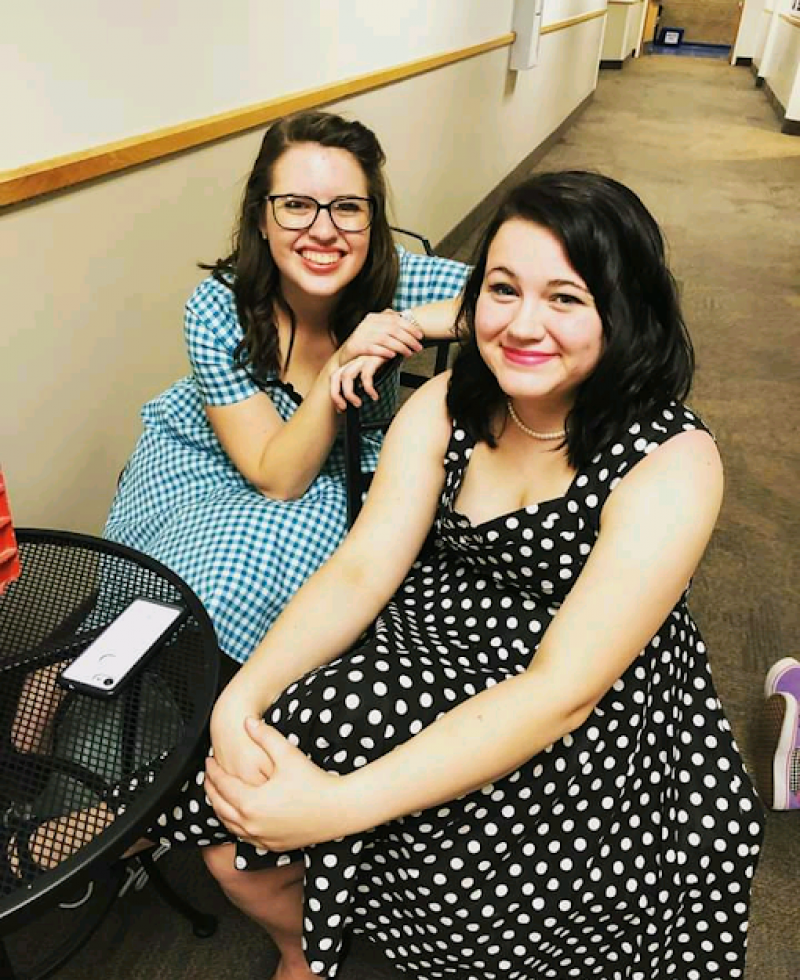 This is a Personal Narative I wrote for my English 1010 class and I really liked it. I hope it makes you laugh!