As I have said before, I live in San Mateo, in the suburbs. My neighborhood, to me, smells like freshly cut grass, tomatoes, chlorine (from everybody’s pools) and sunshine. Even when it rains in San Mateo, you can still see the sun. When I go to San Francisco, it is always about 5-10 degrees colder than San Mateo, and that is one of the things I love about where I live. In my neighborhood, sunshine peeks through the leaves’ of magnolia trees and their petals litter our newly paved, smooth, black street. A light, warm breeze is almost always blowing, and I can always hear the sound of a child’s faraway laughter, blown in the breeze, to my backyard.

In the summer, I used to play with some of the kids next door. There was always a rather large age difference between us, and one summer, it just wasn’t fun for me to play with them anymore. I stopped going over, and they stopped calling. Everyone in my neighborhood has big houses, a large backyard and a pool or large hot tub. The people who live across the street from me have a twelve year old girl I used to play with and a pool almost as big as ours. The reason I loved going over to her house was because she had two chickens, one rooster, two geese and I think a pig. They had a mini farm over there for cryin’ out loud!
Having gone to school in the city for three years, and not remaining friends with anyone from nearby, I feel like I have really grown apart from my neighbors and my neighborhood. I feel like I barely know it anymore, and that makes me sad. I miss the long summers I simply spent in my pool with my neighborhood friends, planting tomatoes and zucchini with my dad in our garden and having to buy a book called 101 Ways to Cook Zucchini because we had so many, and trying zucchini bread for the first time. I had to eat it, among many other green concoctions, for WEEKS!
I also remember dropping off bags of lemons, tomatoes and zucchini on our neighbor’s doorsteps, not wanting any more to do with those three evil vegetables. We even dropped them off at stranger’s doorsteps, having run out of people to give them to, within a drivable distance.
If I was a stranger coming to the Avenue, I would simply think it was a very calm and sunny place to live, which is exactly what it is. There is nothing that it hides. No secret hiding places. No special spots. Just what you can see, no secrets. Just the way I like it. The only strange thing about my neighborhood is that there is no house at 726. I have often gone out looking for it, at least when I was a kid. I would run up to someone’s door, bang on it, and then, if they answered, ask them where it was.
I still haven’t been able to find it, and I probably never will. But I’ll keep looking. 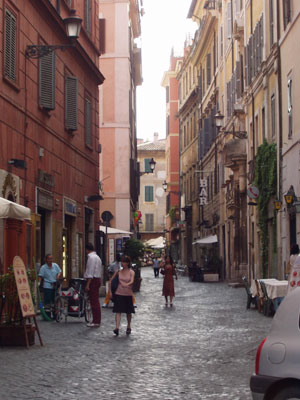