Favorite Quote:
"Before I built a wall I'd ask to know/ What I was walling in or walling out,/ And to whom I was like to give offense," - Robert Frost, "Mending Wall"

I closed the car door and paused, vacantly gazing at my reflection in the window of my dad’s car. My father hopped out of the car and turned to me, signaling he was prepared to tackle the task at hand. It was the day after my Abuelo’s funeral, and we had to go to his house and sort through his things.

Only sufficing a nod, I waited for him to take the lead into the jungle of memories that lay in the house looming before me.

We began our journey from the driveway to the narrow brick path that wrapped around the attached garage, leading to the kitchen entrance. The brick trail was decorated with flowers, trees, and bushes surrounding it. My grandparent’s home was not a big house, it was constructed in the ’50s with a simple stature. Even on the inside, it was just simple and outdated with the kitchen’s simple tile floors, counters, and an ancient fridge cluttered with old photos of various family members. As I followed my father into the kitchen, I found myself taking in the familiar scene. The plain, dual chrome kitchen of white and blue was forever burned into my memory.

“Well,” began my dad, breaking the silence, “I’m gonna go to the basement and start sorting Abuelo’s things,” he said as he opened the basement door, leaving me in the empty house.

“Okay, I’ll just be up here,” I replied, making my way from the fridge to the living room that possessed a dead atmosphere.

The memories of when he and I would play pretend, do tasks together, talk, or just sit in each other’s presence put a smile on my face as I reflected on the years gone by. I flowed through the house from room to room and admired the treasures he gained in life. All the relics represented landmarks in his life. The puzzle of who my Abuelo was became clear as I studied the momentos he collected in life.  I kept drifting through the living room, dining room, and foyer. The natural path of the house drifts to the staircase leading to the second floor containing Abuelo’s study, his bedroom and bathroom, and my dad and aunt’s old bedrooms. The creak on the staircase after each step reinforced the house’s age.

Sixty-six years on these stairs, I thought to myself as I climbed the stairs. At the end of the hallway was my grandparent’s old bedroom. As I reached the landing, I turned to face the hallway and immediately spotted a fuzzy face staring back at me in a chair with small, shiny button eyes. I recognized the stuffed bear immediately: Bixby Bear. He belonged to my grandfather and had never moved from the chair he resided in. I ventured the second flight of stairs, my gaze centered on the children’s toy. The memories of when Abuelo would visit rushed back into my mind all at once. Bixby would often ride with his seatbelt on and needed space after the long ride, he was respected like a person. Bixby was Abuelo’s prized possession,  and no one was allowed to take Bixby. He was an old friend, not just a toy.

“Lexi?” I heard my dad call out while he closed the door to the basement. “Where’d you go?” he questioned as he rounded the dining room corner and ascended the stairs, interrupting my thought. I turned to see my father smiling back at me.

“What?” I questioned, confused. Abuelo and his furry companion were always together as a package, the thought of a time where they weren’t together shocked me. “Where did he get him?” I inquired.

“Well,” my dad smiled longingly as he began his answer, “when Aunt Edith went to Europe, she knew Abuelo was going to miss her. So, she got him Bixby and said ‘when you miss me, hug this bear and think of me,’” he spoke as he approached the bear.

Edith, my aunt, died at twenty-five and I never met her, all I knew of her were the stories relayed back to me.

“You reminded him a lot of Edith, and when she died he was heartbroken. It was a difficult time for him, but when you were born it was like he had his daughter back,” he said with a smile. He chuckled as he continued, “I know he would want you to have Bixby,” he said as he picked up the bear and turned back to me.

As my dad extended his arms where he held the bear, I found myself speechless. As I grabbed the bear and held him I felt the warm embrace of an old friend. The bears eyes, though lifeless, contained a warmth and comfort only found in family. I brought Bixby close to my chest in a tight embrace, the fake fur prickling against my face, then headed out into the hallway, together. 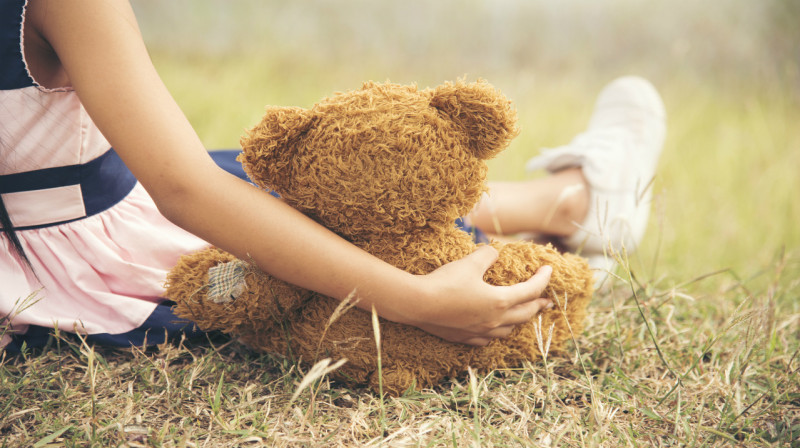 This was written as the first assignment in my AP Language and Composition class. The assignment was to write a personal narrative about an event/trip that impacted us, and I decided to write about my late Abuelo. After turning in this assignment, my teacher told me to try to get it published.

It's been a few years since my Abuelo passed, but I wrote this because I still think of him. It made me realize that even though I only knew him as Abuelo, there was so much more to him that I never got to learn until after his death. I learned the hard way to cherish the people around you while they're here. There's so much I'll never know about him, but he'll always be with me through Bixby.