Is this what you call "Growing Up?" (a moment of infinity) | Teen Ink

Is this what you call "Growing Up?" (a moment of infinity)

I stood stationary in front of the door with my finger torn between responsibility and fear. The doorbell remained nailed to the wall--though I was half-hoping that it would fall to the ground--beckoning. It had to be done, but it could wait a few more seconds.

Tears began to accumulate in my eyes. It was strange: the tears never dared to explore the countours of cheek and lip, but rather sat in the crevice between eye and lid like a chickling avoiding a first flight. I guess they never needed a reason to, as the saying goes, "step outside of the box."

Why was I so nervous? It was not like I had never confessed or apologized before... My dad had made me do plenty of things to make up for crimes I had committed against my big sister, why could I not do the same with THIS mistake? The only difference between the two was that I now had to confront an adult, and that this accident cost more than a piece of bubble gum...

Blood began pulsing faster through my veins as I saw Lynn walking through her bedroom on the second floor of the house. Once glance down and she would see me standing on her porch: a deer in headlights. I knew I could not turn around now. I was about to get caught at the scene of the crime for God's sake!

A sigh escaped my lips. I hope she didn't hear that, but when I saw her car in the driveway it was impossible, as a criminal, not to feel remorse. It was ruby red and glistening, even though the sun did not shine. There was only one teeny tiny little imperfection on the entire vehicle. Unfortunately, that was why I was there.

Hmmm, what would my family say when I was reported dead the next morning? Stop it Holly, just get it over with--you have to be humble at some point in your short, short life. The time has come.

I brought myself to touch the pearly button, a fingerprint deterring the polished gloss. Great, another thing I could apologize about. Oh well--at least it would serve as proof of my last moments of existence...

As the ringer slipped into its protective shell, as a faint "ding-dong" echoed through the house, and as I saw Lynn (a towering five feet four inches tall) unlocking her door, my life flashed before my eyes. I mentally said my goodbyes to my parents, my sister, and my guinea pig and I continued to "hang tough." The door creaked open, and before she had a chance to say anything, I blurted out my apologies for breaking her car. Then I ran home, water flowing down my eyes like champagne from a just-opened bottle. I was forgiven.

I learned two things from this treacherous experience: One, what humiliation felt like, and Two, that society was not as damned as Disney had made it out to be. 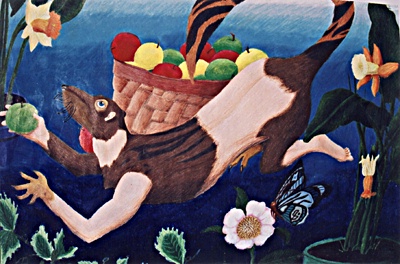