A Vacation from Technology | Teen Ink

A Vacation from Technology MAG

There are probably some families who truly relish pitching tents, dining on canned beans, and having the opportunity to see a grizzly bear tear apart their entire campsite for a package of peanut-butter crackers. When Mom refers of this type of family – “earthy crunchy,” she calls them – her tone always suggests that we do not fit into this category. From a young age I have known the futility of suggesting packing up the car to live in the wild for a week – and I, too, appreciate my house, my own warm bed, the various conveniences of living in modern civilization.

But there is something very seductive about camping. I assume activities are limited to things like hiking, fishing, card games, and eating. The essence of camping seems to be simplicity. It provides the tranquility of Thoreau at Walden Pond. It provides peace. Nothing to do but close your eyes, let the sun warm your face, and breathe the fresh air.

With this idea in mind, I had a proposition for my family. What if we cut out all recreational technology – TV, computer, cell phones, radio, iPods, etc. – for a one-week experimental non-trip? In my mind, it would be like camping, minus the eating disgusting food, wearing filthy clothes, and having dirt under your fingernails.

So, careful not to use the word “camping,” I proposed the idea at dinner one night. My family was skeptical; I think they sensed earthy-crunchiness in the offing. “Why don't you do it?” they asked. Sure, I thought. I could show them that it was far from impossible – and perhaps even fun. Thus, I began.

It was Day One sans technology, and I had reached a conclusion: this is so easy. Incredibly easy. As easy as, well, watching TV on a Friday afternoon in my ­pajamas. After the first day, at least, I could honestly say I did not regret my decision.

On Day Two I shocked my sister. After she returned from the library with a movie (a documentary about electric cars), she was taken aback when I said I could not watch it due to my no-tech commitment. “Wait, so you haven't watched TV all day? What have you been doing?” she asked.

I had been doing many things, actually. Keeping in mind that summer is an alternate universe where sleep time is from 10 p.m. to 10 a.m., and eating an apple is a half-hour ordeal, going to the library and picking up Band-Aids is not only an adventure, but most likely the only adventure of the day. It's not that summer is boring – it's just that much of the time is a giant void. A void that technology can conveniently fill, creating something my sisters have affectionately termed “lazy time.” For me, this void now had to be filled with dog walking, writing, dipping in the pool – “chillaxing” would be the most accurate term, proving my idea was turning out to be effortless.

You may be wondering how long it took for me to become excruciatingly bored. Day Four? Five? Day Seven? In fact, my journey got easier each day. I had assumed that boredom was that voice from your stomach (when the “Project Runway” marathon is over and you're watching “Cake Boss” or something similarly vacuous) that says: “There's something more ­exciting you could be doing.” Or the disappointment you feel after having cleaned out your inbox.

But the boredom I felt, if I felt any at all, had more to do with contentment. I cleaned my room, for once, thoroughly. I hiked the Blue Hills with my sisters, which we had not done since I was five. I watched the sunset in the corniest possible way, thinking, Have I been missing this all summer? It is hard to confuse boredom with the pride of accomplishment.

I came to a conclusion on Day Five, a Saturday, while chopping mushrooms to put in my eggs. Technology is not to blame for being bored. It's just that it often convinces us that we need to know or see or do something that we never would have before. No one wakes up in the morning longing to create and tend a virtual farm. At some point during the day – probably around 2 o'clock – that clarity of judgment is lost, and tending a virtual farm seems like a great idea.
At 2:30, with your crops harvested, you realize that what you've been doing for the last half hour has been completely useless and, frankly, dumb. Chopping mushrooms is not an intellectually stimulating activity either. Yet at the end, enjoying my eggs, I could not help but smile at having made a delicious breakfast.

Day Seven – the final day. Tonight I was to repropose my idea to my family at dinner. What would convince them to join me? I told them how much time it freed up, pointing to my clean room, my completed summer reading. Though impressed, they had many questions. Can we watch TV before bed to relax? (No.) Can we answer the phone when people call the house? (Yes.) Most urgently: What if my Facebook friends are doing something and I don't know about it? (The world will end.)

In the end, they did not join me. Maybe if I had woken up at 5:30 every morning, cleaned the house and made them breakfast in bed, they would have been convinced. Yet by trying to prove to my family that living without the entertainment of technology is possible, I did prove to myself that it may even be more exciting than life with technology.

Next year, though, I think we should go camping. 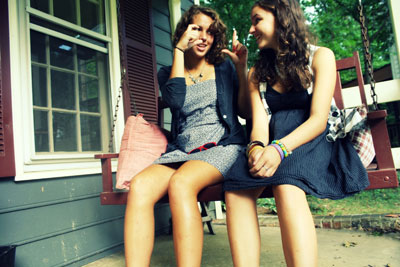 View profile
WOW!!! I love your article! It's awesome and and it totally inspired me. I want to try to do that too. Great job and that is such a good idea. :D